How to Research Your Genre to Write Better Stories

The first time I wrote a novel, I didn’t think about genre until the first draft was done, and I began trying to untangle my mess in revision. After two painful years (mostly comprised of avoidance, procrastination, and general despair), I hired a developmental editor who began our first phone call by asking, “What kind of book is this?” and “Who is your ideal reader?” 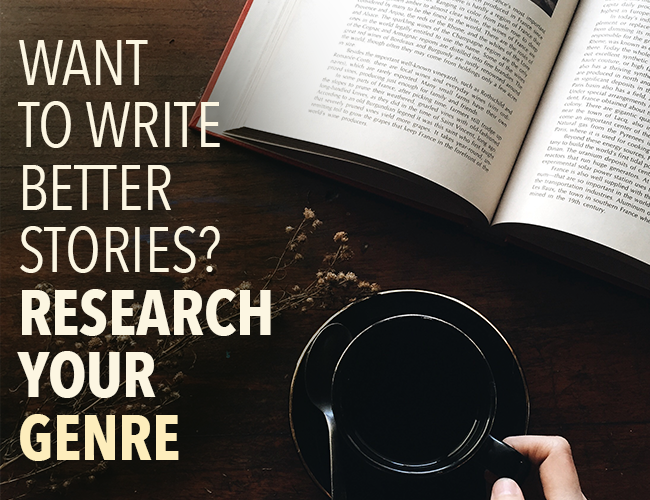 “It’s for everyone,” I said. I could hear the rise and fall of my breathing in the silence.

“No, it isn’t,” she said in a kind, but firm voice. Within minutes, I realized I had skipped a clarifying question that would guide every step of the book process from the plot and characters to cover design and marketing. The question?

What kind of book is this?

I needed to identify the genre.

Genre appears simple on the surface: writing with similar form or characteristics. We’re familiar with genres like mystery, romance, horror, and science fiction. But it’s more: Genre is a promise to the reader, and more specifically, it’s a series of promises.

Some writers think identifying and writing to a genre kills their Muse’s Unicorn Magic. Not so.

Think of it this way: Good writing is a lot like giving a tour. Readers buy books to take the tour. If I hire a tour guide to take me around Paris, I expect to see Paris. Not London. Not Berlin. While those are lovely places, that is not where the tour guide said we were going, and it isn’t what I paid for. There’s nothing I appreciate more than visiting a city for the second or third or twentieth time and getting a great tour from someone who surprises and delights me by showing me the city in a new way.

“
Good writing knows where I expect to go, and it takes me there in an unexpected way.
Tweet this
Tweet

Who is my reader? What do they expect?

My creative writing students are often surprised when I tell them to begin their story research on Amazon. I ask them what my developmental editor asked me: “What kind of story is this? Where would the reader look for it on Amazon?”

Some writers tell me they are only writing for themselves, but I guarantee when they finish a story the first thing they say is, “Will you read this?” to everyone within hearing distance. I do the same thing. This is why I need to clarify genre as soon as possible, so I know what promises to make and keep for my readers.

Here are two specific ways to start. Ask yourself:

It won’t be exact, and that’s okay. Once you have a category, look at the summaries of several books or films in that genre. What patterns do you see? Hopefully you have read (or watched) broadly in that genre, so if possible, think through the plot progression. What are the key scenes? How does the main character change? What kinds of complications cause conflict? What role does the setting play?

“
Clarify your genre early on so you know what promises to make and keep for your readers.
Tweet this
Tweet

If I have a book that is similar to the show Murder She Wrote, I might break it down like this:

If I get stuck writing my book, I can look at what a cozy mystery usually promises and use it to keep me moving forward. If I know my reader expects a dead body, I can deliver it in a way that is unexpected. (Wait, maybe that wasn’t the best example.)

Note: Sometimes a story draws from more than one genre, which can work, but make sure the primary genre is clear or you risk sending mixed signals to the reader.

But isn’t genre just a bunch of clichés? I want to be original!

Have you heard of Shakespeare? The fellow wrote around ten tragedies for the stage and every single one begins with some noble person in trouble for their pride and ends with dead bodies littered across the stage. The eighteen or so comedies he wrote all begin in chaos and end in order with a marriage.

“
Shakespeare knew how to work his genre by creating original characters and conflict within the established form.
Tweet this
Tweet

The same is true for us. If you know the most common devices in your genre, write them down and use them to create small twists or turns that take the story new places within the boundaries. (Even in literary fiction, writers usually use some external control to guide the story. Consider James Joyce who used Homer’s Odyssey as a structure for Ulysses.)

I talk to writers all the time who are paralyzed because they don’t want to write clichés. So write them down and then revise them. We’re writers! We revise!

Haven’t started your book yet?

You can still use genre research to guide your process, even if you are a pantser who hates outlines. In fact, you may even find you have more fun writing when you have a few signposts along the way to keep the story on track. (Last ditch plea: As a recovering pantser, I can tell you it will save you hundreds of hours (and pages!) in revision to clarify genre early on.)

By the way, nonfiction research works the same way. Go see where your book fits in the market.

Once I identified the genre of my floundering novel as YA, coming-of-age science fiction, I understood what scenes had to be cut and what my protagonist needed to do to grow up by the end. I understood where my book would fit on a bookshelf and what the cover would need to look like to find the right readers. I figured out how make the right promises from page one to orient the reader.

When I was stuck in the middle? I knew to find complications that forced her to act on her own instead of depending on older figures in the novel to reinforce the coming-of-age theme.

It’s worth an hour of research to clarify the question your first editor is going to ask, “What kind of book is this?” Don’t be like me—have an answer ready.

Want to read more about genre? Check out Save the Cat by Blake Snyder (ch. 2 especially) and The Story Grid by Shawn Coyne.

Have you researched your genre? How has that research helped your writing? Let us know in the comments.

Take one of the following scenarios and write it as a short scene to fit a genre, but don’t tell us the genre. Let us guess based on the promises you make with character, setting, and other details. Scenarios:

Write for fifteen minutes. When you’re done, share your scene in the comments, and don’t forget to comment on a few other writers’ works. Can you guess what genre they used?

A tip for teachers:

One of the first things I teach readers is to orient themselves to the text by identifying the promises made in the initial paragraphs, which includes genre. In fiction, stop after reading the first paragraph or section and ask:

What kind of story is this? How do you know?

Most students can tell you what kind of story it is, but they may find it harder to articulate how they know. Help them make predictions based on the intro. Then, at the end, have them revisit those initial paragraphs. You’ll be surprised how often the beginning foreshadows the end, and students can use the same circling technique to create unity in their own writing.

Sample stories to use with high school: “Mirror Image” by Lena Coakley, “The Story of an Hour” by Kate Chopin

With middle school: “The Black Cat” by Edgar Allan Poe, “The Third Wish” by Joan Aiken