The Road Back in the Hero’s Journey: How to Write a Fake-Out Ending

Have you ever heard of a fake-out ending? Maybe you've come across it when discussing how to tie up your story after the climax, or you've seen it as part of the road back moment in the Hero's Journey. 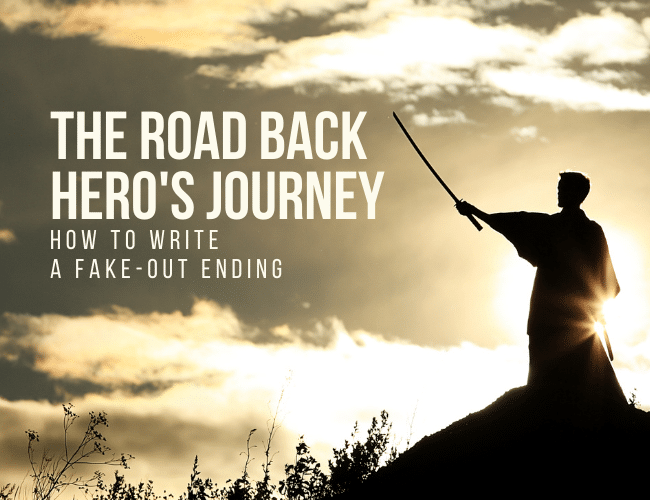 Every story has that moment when everything seems okay. The dust has settled. The hero has their object of desire in hand. And for a moment, there's peace.

But then all hell breaks loose.

This is the fake-out ending: that classic neck-breaking part of the story that thrills readers and audience members practically every time—grabbing them at the exact moment they thought everything was okay.

Here's how you can write the fake-out ending during your protagonist's road back, Hero's Journey-style.

Hero's Journey: The Reward and The Road Back

To write an excellent whip-turn moment in your story, you're going to need to know about these two steps of the Hero's Journey:

What is the “Fake-out” Ending?

While the “fake-out” ending is not the term Joseph Campbell would have used when he studied mythology, it works for us because it is a common trope in many of our favorite stories. According to Christopher Vogler's twelve steps of this journey, our “fake-out” will occur in steps nine and ten.

But before you can get to your big surprise, you need to set up your story by getting the previous steps right:

At this point, your story can go in a number of directions.

But no matter what, it cannot be over. It must evolve into something much deeper and more meaningful, setting up a huge payoff.

And to do that, you need to trick your audience.

This brings you to Hero's Journey Step 9: The Reward. It is here that the hero receives the object of desire they have been pursuing in the story thus far.

But it cannot be enough to fulfill the central conflict in the story. That's because your hero must have an internal need that the object doesn't satisfy.

“
Your hero has spent their quest pursuing an ultimate reward. But when they reach it, they'll find it doesn't satisfy.
Tweet this
Tweet

To illustrate this, let's look at “4 Ws,” the most common Rewards that heroes pursue and acquire during the Ordeal.

Sometimes the prize is a pile of money, or a “reward” (think Han Solo's goal in Star Wars). The hero will succeed in the Ordeal and be rewarded for it in cash.

Yet the story isn't over because deep down the reader knows that there is much more to life than money. Money, and the pleasures it can purchase, rarely satsify the internal needs of our hearts. So the story cannot end here.

Often the hero will be pursuing a mighty weapon that will help them vanquish the villain. Excalibur in The Sword in the Stone. The Master Sword in The Legend of Zelda.

While weapons tend to deliver an artificial sense of power, humanity again knows that true power lies within. Real power is found through self-discipline and mercy.

So the story cannot merely end with the acquisition of a weapon.

On a quick side note, sometimes the “weapon” isn't an item to attack with, but an item to defend with. In The Hunger Games, Katniss receives medicine with which she treats Peta's wounds. In Captain America, the hero is symbolized by his shield.

Another common reward is Wisdom, or information that the hero needs. This can be an answer to a question or a meaningful secret:

“What is the answer to life, the universe, and everything?”

The Hitchhiker's Guide to the Galaxy

“Obi-wan never told you what happened to your father . . .”

Star Wars: The Empire Strikes Back

Darth Vader's iconic words prove how dangerous information can be. With just a phrase, Luke Skywalker's normal life is completely transformed into chaos.

As Solomon wrote in Ecclesiastes:

“For with much wisdom comes much sorrow; the more knowledge, the more grief.”

The story cannot end even with an answer to a deep, troubling question.

Most mythology was written by men for an audience of men. This is the root of the “Damsel in Distress” character archetype. That's why we have Faye Dunaway in King Kong and Princess Peach in Super Mario Brothers.

Thankfully this archetype is being flipped on its head, both by storytellers giving these damsels more independence and utility (think Bo Peep in Toy Story 4) or by putting male love interests in peril so the female hero can save the day (Wonder Woman).

It also presents writers the opportunity to redefine the damsel. Perhaps gender doesn't have to define a damsel. Maybe in a story a “damsel in distress” is instead known as a character or valued object that is put in distress.

The intention of the damsel in distress? Saving the damsel doesn't fulfill the ultimate need for justice and peace. It merely satisfies a brief and temporary want.

And that's why the story can't end yet.

You can't let your audience know your true intentions. That would rob them of the shock and surprise.

That's why there's Hero's Journey Step 10: The Road Back.

The Road Back is a somewhat open-ended step that takes a variety of shapes and forms depending on the storyteller and the culture of the myth.

In general, it is a short period of false satisfaction while the hero returns home (either at a walk or a sprint). The hero thinks that because they have acquired the Reward (the object of desire) that the adventure is over and the evil is defeated.

Yet they know, and reveal in subtle ways that the Reward isn't nearly as satisfying as they thought it would be. Sometimes this dissatisfaction manifests itself as a slow boil. Other times its appears as sheer terror as the villainous Shadow, furious at the prospect of defeat, chases the hero and swears revenge.

Another variable is time duration. Depending on the nature of your story and the conflict the hero undertakes, the Road Back may be a very long or short part of the story.

In general, though, you shouldn't drag it out too long. Your audience won't stand for it. Do so, and you'll be accused of preaching or getting too heavy with your “message.” But it also can't be too short, or your story will be light on meaning and impact.

Writing the Fake-Out Ending in the Road Back

In a nutshell, your fake-out ending should contain three scenes:

1. The Hero Gets the Reward

Write a scene where your hero's hard work pays off. Like Han Solo in George Lucas's space epic, your hero should receive something of value for their efforts.

2. The Hero is Dissatisfied / Too Easily Satisfied

Even though the hero receives something of value, a problem remains unresolved. This works even better if the Reward feels like a payoff or bribe, a temptation to return to our ordinary lives with a little more money, power, or pleasure. The hero questions if it all was worth it; they may even give the Reward away or decide not to take it at all.

The hero can also be too easily satisfied with the Reward, leaving unresolved conflict. This sets up an even more shocking twist later when the Shadow rears its head again, shattering the false comfort provided by the physical Reward.

Pro Tip: Make the Reward complicated and difficult. Give the hero a reason to consider walking away or giving up. Think about how your reader would feel if they got their hands on the Reward. This is a crucial scene in which to drum up empathy!

The first version of step ten sees the hero returning to their ordinary world, believing that the adventure is over. It seems like the hero has defeated the Shadow because the Reward has been claimed. This false sense of security creates the massive fake-out you're setting up!

This scene often shows the hero and the remaining cast of characters at peace, feeling safe and secure. This is the scene in Aliens when Ripley believes they have successful escaped the xenomorph threat, setting up the shock of the Queen Alien's appearance seconds later.

3B. The Hero Runs Home in a Chase

The second version of step ten occurs as a chase to escape the Shadow or to keep up with the real goal, which is on the move.

For example, in The Matrix Neo runs from Agent Smith, even after the climactic battle that went his way. While Neo was rewarded with victory, it was short-lived because beating an agent in combat isn't nearly enough.

While the “fake-out” of this ending is brief, and not nearly so shocking, it still wows the reader as Neo (the hero) must face even more difficult hurdles. And these hurdles are deadlier, which we'll see in step eleven of the Hero's Journey.

The opposite of running from the Shadow is running toward the true goal.

This is the final act of Toy Story in which Woody and Buzz chase the moving van. While getting back to Andy was always the goal, the story explores themes of friendship and knowing ones worth.

After triumphing over Sid and his maniacal schemes, Woody and Buzz are briefly rewarded with safety and joy. They've worked together as a team for the first time and found success.

Their ultimate goal, being reunited with Andy, is about to get much harder to achieve. The chase begins.

These three scenes are key to assembling a perfect ending to your mythical story structure. When you deliver on your story's plot promise with a reward that is pleasant but ultimately unsatisfying, you dig at one of life's core realities: There is so much more than pleasure, power, and riches that give life meaning.

When you follow that up with a period of false peace, or a desperate chase to get true peace, you deliver a story that is true to the desires of the human heart.

Make sure your Reward isn't too satisfying, and your villain isn't too easily defeated. Then write a knock-out punch of an ending will be ready to go!

What Rewards can you think of from stories you love? What makes them not-quite-satisfying? Let us know in the comments.

For your “false” ending to work, your hero's object of desire needs to be something of a letdown or a game-changer. Freewrite for 15 minutes about a goal for your hero that could somehow be disappointing, confusing, or complicated. How might it be pleasant to win, but ultimately unsatisfying? What would your hero say once the object has been acquired? Think about it and write the dialogue in your freewrite!

Journal these reflections and post them in the Practice below!