Humor Writing: 5 Side-Splitting Ways to Infuse Humor Into Your Writing

Who doesn’t love to laugh? A good, healthy chuckle goes a long way toward making a character more likable and a reader more willing to stick with that character through difficult situations. Most stories, whatever the genre, benefit from moments of humor. Yes, humor writing is hard—but these strategies will give your writing the perfect blend of levity. 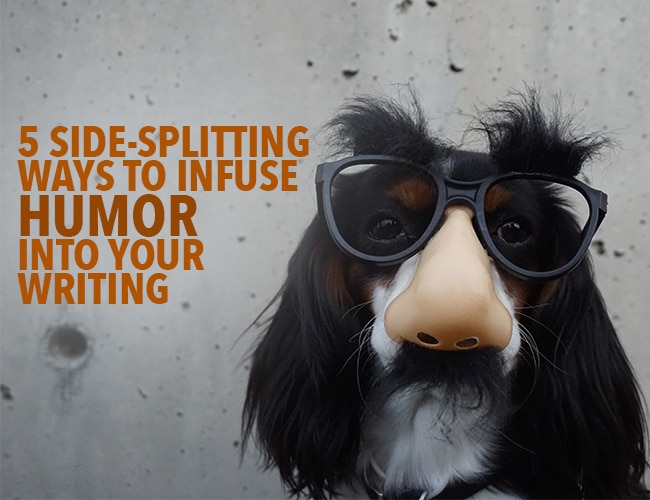 Comedy writing is hard, and requires a special sort of skill set. That’s not what this article is about. These tips are not meant to equip you to write for late night television or snag a job on your favorite sit-com. I’m just talking about ways to add some laughs and light moments into your stories, to liven up your dialogue, and endear your characters to readers.

Let’s dive in to these five techniques for humor writing.

This technique can produce delight in the reader, as well as giggles and grins. This is when you lead your reader down a particular path, setting up an expectation, and then at the last moment you switch direction completely.

Here’s a rough example of what I’m talking about: James didn’t like working with attorneys. It’s not that he had anything against them, personally. It sprung more from the fact that lawyers—even the most ethically correct and upright of them—are spawn of the devil.

It seemed, at first, that James was being fair-minded in the reasons for his dislike, and the reader is expecting a fair explanation. Then—twist—and not what the reader expected. Unless, of course, they’ve spent time with lawyers.

Here’s an example I found by Dave Barry, from his book Live Right and Find Happiness.

Beer is not the answer. Sure, when your problems are getting you down, drinking beer might temporarily improve your mood. But what happens when the beer wears off? You’re right back where you started, still stuck with all the same problems. Sooner or later, you’re going to have to face the harsh truth: You need more beer.

2. The Rule of Three

Schoolhouse Rock declared it and we all know it’s true—three is a magic number. Despite being odd, it brings a feeling of completeness. The Trinity. Three strikes and you’re toast. A Jedi, a priest, and a Rabbi walk into a bar.

This trick takes the unexpected turn and pairs it with the power of three. Set up three items. The first is logical, the second follows form, and the third is off-the-wall.

For instance: In her free time, Sally liked to crochet, go to the movies, and crack heads at the local roller derby. Or maybe: Jared opened the cabinet in the evidence locker. It contained a wrist watch, a handful of coins, and a well-worn whoopie cushion.

Another example from Dave Barry. What can I say? I recently read the book. Here it is:

I should be a happy man. I have all the elements of a good life: a loving family, a nice home, a dog that doesn’t pee indoors without a good reason.

“
Here’s a quick and easy way to infuse humor into your writing: set up a list of three items. The first is logical, the second follows form, and the third is off-the-wall.
Tweet this
Tweet

This powerful method will not only inspire laughter, but can form “bookends” for your story, giving it a nice finishing touch.  You do it by setting up a situation early on and paying it off at the end. Or, in some cases, simply later on in the story.

For example, in a story I recently wrote, my protagonist is a guy named Tal Bannerman. Tal does not want to get married. At the beginning, he goes to extraordinary lengths to avoid such commitment (ironically committing himself to something far more dangerous) and finally drives his girlfriend, Bridget, to dump him.

The story is a thriller, and after a whirlwind of tension-filled perilous action involving Tal and his new, government-issue buddy, Wrigley, it ends with Tal inviting Wrigley to the wedding, saying Bridget can’t wait to meet him.

Another example of this device that requires a setup and subsequent payoff would go something like this: Convey to your reader that your character lives for three things only. Let’s say spouse, pet cat, and Stouffer’s Lasagna. That alone will raise a chuckle, as it follows the Rule of Three.

But later in the story, his house explodes, leaving nothing standing but the refrigerator. He anxiously runs to it and flings open the freezer. Everything’s going to be all right. The Stouffer’s Lasagna survived the blast.

4. The Bash or Bless Method

This is a great way to brand your character. Find something your character either really, really loves or really, really hates and keep hitting on it throughout the story. Readers will come to link him with this particular thing and will think of him whenever they come across it, even when they’re not reading your book. An awesome way to stake out some real estate in the reader’s head.

Here’s how you use it to make your reader laugh. Let’s say your character is a high-level chef who loves haute cuisine. In her book, the most abominable of all human creations is SPAM. She abhors it, and this comes up enough times in the book that your reader can’t fail to know it.

Her husband is behaving strangely and she hires a PI to investigate. When he reports in, handing her the envelope full of incriminating evidence, her blood runs cold. An affair, she could’ve handled, but this! The photos show hubby secretly eating SPAM—fried, roasted, spread on crackers. She’ll have to get him into rehab.

Of course, there are many ways to use this technique, and you may find one that’s just right for your story.

If you want readers to get fully drawn into your story, you should be using the power of POV to do that. Point of View, used properly, is a massively powerful tool and you can use it to add humor through your character’s observations.

For instance, your character will see things in a way that is distinct from others, based upon what makes them unique. Let’s say your character is deaf. She cannot look at a roomful of dancing people without cracking up. Imagine if people walking down a crowded street suddenly started swaying their hips and moving in sync with each other.

It would be ridiculous without the music. The beat, the song, is what makes sense out of their movements. Without the sound, their behavior is just downright embarrassing.

Use your character’s observations and unique point of view to show the absurdities that exist in situations we think of as ordinary. Consider Halloween. Is it normal for parents to dress their children in outlandish costumes and send them to the neighbors to beg for candy? Only on this one day of the year does something utterly bizarre become normal.

Have your character observe the absurdities in life.

Jerry Seinfeld is a master of observational humor. Here’s an example of his unique perspective finding the farce in statistical data:

According to most studies, people’s number one fear is public speaking. Number two is death. Death is number two. Does that sound right? This means to the average person, if you go to a funeral, you’re better off in the casket than doing the eulogy.

Kick your shoes off and pull up a chair

Adding humor to your work is an excellent way to engage readers and keep them turning pages. Whether you do that with one of the devices discussed above or with a fresh, original character voice, or by some other means, humor is a winning strategy.

Kristine Kathryn Rusch, one of my mentors, maintains that when readers open your book, they are inviting you into their living room to spend some time. They want characters that are comfortable and enjoyable to be with, as well as entertaining.

A little laughter goes a long way toward making that happen.

How about you? Do you use humor in your writing? Do you have any more tips for humor writing? Tell us about it in the comments section.

With regard to a piece you’re currently working on, choose one of the techniques above and develop a scene with humor. If you’d rather, use this prompt for your scene:

Jody shouted and waved, running to catch the blue bus, but she was too late. The bus drove off without her. Now she has to deal with all the stares from people waiting to board the purple bus.

Remember, you want your readers to enjoy spending time with this character, and to laugh. Write for fifteen minutes. When you’re finished, post your work in the comments section. And if you post, be sure to leave feedback for your fellow writers!