What Is An Idiom? Funny Examples

Over the weekend, Joe sent me a link to a blog that talks about how students are apparently saying “all of the sudden” instead of  “all of a sudden”. Is that a thing? It was actually the first time I'd heard of the words in idioms being switched around. In case there was any confusion, “all of the sudden” is incorrect, “all of a sudden” is correct, and whoever created the idiom made it a completely arbitrary decision. 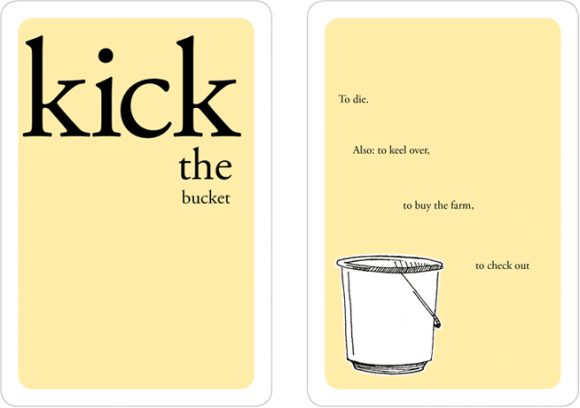 An idiom is a phrase that has a figurative meaning that is completely different than its literal meaning. Common ones in the English languages include “break a leg” to mean “good luck” for stage actors, “it's raining cats and dogs” to describe a torrential downpour, and “kick the bucket” to mean “pass away”.

Wikipedia says there are about 25,000 idioms in the English language. No wonder it's apparently one of the hardest languages to learn.

Other languages have their own idioms as well. In Spanish, their version of “kick the bucket” translates to “to stretch one's leg”, and the Latvian equivalent translates to “to put the spoon down”. In general, idioms don't translate well literally from one language to another, which is why the English set of idioms is so hard to learn: the equivalent phrase translates to something totally different.

An Idiom + Wisdom = A Proverb

Proverbs often are in the form of idioms. “A bird in the hand is worth two in the bush” is a challenge to translate literally and still preserve the meaning, although some idioms aren't completely far off from translated meanings. “Waste not, want not” is a good example of an idiom that has a mostly preserved meaning across translations.

Idioms can be used in your prose to establish a character's personality. A character who makes ample use of proverbs might be considered the wise sage of the story. A word of caution though: some idioms border on the side of cliche, so be conservative with excessive idiom usage unless you're looking to go that route.

What do you think the strangest idiom is? Here's a list of common idioms to help.

Take fifteen minutes and write about the start of the holiday season, going nuts with idioms. You can use subtle idioms, overt idioms, or whatever kind of idioms feel right for you. Post your practice in the comments and leave notes for your fellow writers.