Writing Prompt: Use Junk Drawers to Discover Your Characters

Characterization is a huge part of writing, no matter how long the story. You need to know the ins and outs of your character’s personality. What makes them tick? What do they want? Where to do they come from? 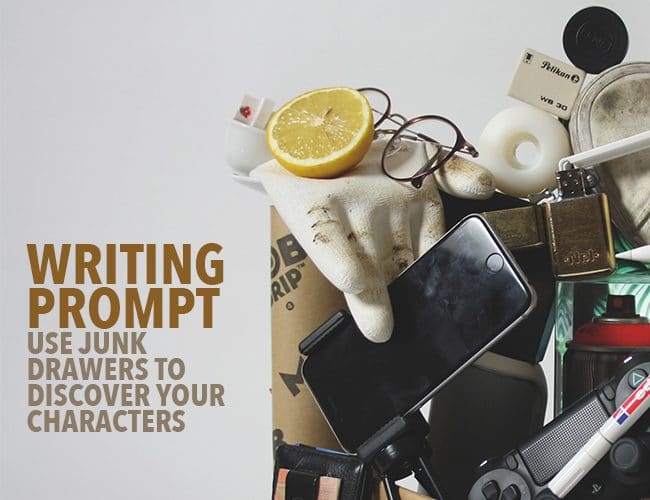 Sometimes it’s a little difficult to come up with new character traits and idiosyncrasies that aren’t cliché or contrived.

Today, we’re going to have a little fun with character development. We’re going to think outside the box of character questionnaires and try a writing prompt to help us discover our characters through a different route: What’s in their junk drawer?

Why junk drawers are treasure troves

I’m sure you’ve seen Sherlockian police procedurals where the detective finds some mundane thing lying in a drawer that ultimately ends up being a vital clue to the mystery.

I bet in your own drawers you’ve got random detritus from your life. Concert ticket stubs. Cords from the Blackberry you owned when Blackberries were cool (note for the youth: a Blackberry was an early version of the smartphone). Notes to yourself or from friends. An old dog collar from a pet who passed away.

Junk drawers are kind of like time capsules for our lives, and they can illuminate things for your character as well.

Ready to dig through your character’s junk drawer? Here’s how.

First, choose one of the drawers below OR make up your own.

Now imagine the person that would keep such a drawer. What do the contents say about them? What kind of life have they lived? What kind of person are they now?

“
Writing prompt: What’s in your character’s junk drawer? And what do those contents say about them?
Tweet this
Tweet

What’s something in your junk drawer that would provide a vital clue to who you are? Let me know in the comments!

Choose one of the drawers above or make up your own drawer contents. (If you make up your own, make sure to list the contents in the practice box!) Take fifteen minutes to write about the character that owns that drawer.

Don’t forget to share your work in the practice box below and give feedback to your fellow writers!