What’s Characterization? What a Writer Really Needs to Know

How do you create memorable characters? What’s characterization, and how does a writer turn a name on a page into a person so vivid and compelling that you imagine they’re real?

Characterization is the creation and development of a fictional character.

Direct characterization is when an author uses straightforward description to describe a character, leaving no more for ambuguity. In other words, the author tells the reader exactly what a character is, which can include specific details about a character’s appearance, their wants and needs, their job, backstory, and more—as long as the narrative states these details directly and exactly.

“Timmy was a quiet young boy who hated people but loved plants and animals.”

“Molly never left her house, not since the day she became afraid of the sun.”

Indirect characterization is when an author describes a character in a roundabout way; they imply the kind of character in the story through their actions, dialogue, or a internal monologue.

Compared to Timmy and Molly in the examples above, an author who uses indirect characterization would describe these characters with more ambiguity—a literary technique used to encourage a reader’s imagination more.

Molly crept across the room to stare outside her window. Maybe today would be the day that she took a step forward—that she confronted the useless fear Dr. Warren told her would paralyze her life if she didn’t make some changes soon.

With the curtains closed, Molly, sweating and shaking, slipped her hand through the slit in the curtains. She pressed the latch into her thumb as if trying to puncture her skin. Molly bit her tongue, annoyed that the place that once brought her so much joy now only caused her pain and worry.

A writer needs a balance of the two.

Approach to Characterization: How NOT to Develop Characters

Beginning writers often spend a great deal of time developing their characters. With this time, they spend time getting to know their cast on and off the page—and then more often than not make the mistake of include every detail in the story.

If you want to write a compelling cast and plot, you don’t need every detail about every character. You do need to include enough detail that makes them sympathetic and interesting.

Before we get into characterization, here are some ways NOT to develop characters:

Do you introduce fictional characters with backstory, summarizing their life from childhood to the present for five to ten pages. This will not make them a realistic character, and it will slow the story down.

Backstory is fine, but a little goes a long way. A paragraph or two will do.

Do not describe your key characters in too much detail. Readers don’t need to know what a character looks like from the tips of their hairs to their crusty toenails.

Description is great, but it’s only skin deep. And a person is rarely who they say they are.

Do not spend pages telling readers every detail about a character’s likes and dislikes. Filling your story with trivia like your character’s favorite ice cream flavors or which movie they saw three times in theaters won’t move the plot forward or show us who they really are.

Characterization is one of those topics they teach at the beginning of writer’s workshops and creative writing classes.

But I’m about to say something provocative, something that may alienate me to writing professors everywhere. Here it is. You ready?

Stories That Overdo Characterization Are Worthless

In fact, characterization can even be harmful to the writing of your story. Let me explain.

Good characters are the reason we read stories. We develop a relationship with Elizabeth Bennett, Holden Caulfield, and Harry, the boy who lived. Peter, Susan, Edmund and Lucy become our best buds, and when the story ends we’re sad they have to leave us.

Have you ever heard of fan fiction? Some fourteen-year-old from Iowa wants to hang out with Harry after Hogwarts so they write a story and post it in a forum.

Plot: How to Really Develop Your Characters

Don’t believe me? Here’s an oft-repeated explanation of the three-act structure:

“
“In the first act get your principal character up a tree; in the second act, throw stones at him; in the third, get him down gracefully.”
Tweet this
Tweet

You have to throw rocks at your characters. You have to find elaborate ways of making their lives hell. You have to stymie their desire and fail to meet their basic needs: food, shelter, companionship, significance.

That sounds like a plot, right? It’s the events of your story, the problems and hurdles your character encounters.

Why? Because causing your characters problems is how you reveal their character.

“
“People become, in our minds, what we see them do. This is the strongest, most irresistible form of characterization.” —Orson Scott Card
Tweet this
Tweet

What do your characters do, then? Not where they grew up or what color their eyes are or what they say their favorite food is. What do they do?

Best of all, when faced with major problems, issues that threaten to derail their goals, crises that will cost them, how do they choose to respond?

As Viktor Frankl says, “A human being is a deciding being.”

We remember characters because they do interesting things. We forget characters whose favorite food is pizza.

You don’t start writing a story with characterization. You do what Allie Fox did to his son in Mosquito Coast: you push them into the dark, scary bowels of Fat Boy.

You send them up the sails of a ship tossing in a hurricane. You take them to Belize. You make a man out of them, against their will and better judgment.

If, instead, you start with characterization, you’ll fall in love with your character prematurely.

This is a real danger. How will you do the necessary work of torturing them until they cry out in agony if you empathize with them too much too soon? Better to punish them before you know who they are yet.

Don’t worry about characterization. Focus on throwing rocks at your characters, at finding the perfect problems that will cause them to struggle, to face a crisis and make hard decisions.

As your character reacts to and deals with the pain, we’ll see who they are.

What have your characters done that has defined them? Let us know in the comments.

Your main character is alone at a party with a hundred people. What do they do?

Practice characterization through action for fifteen minutes. When your time is up, share your practice in the practice box below. Be sure to leave feedback in the comments for your fellow writers, too! 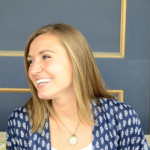 Abigail Perry is a Certified Story Grid Editor with professional teaching, literary agency, and film production experience. In addition to writing Story Grid masterwork guides, she works as a freelance editor and is the Content Editor for The Write Practice. Abigail loves stories that put women and diverse groups at the center of the story—and others that include superpowers and magic. Her favorite genres include: Smart Book Club Fiction, Women's Fiction, YA Fantasy, Historical Fiction, and unique memoirs. She also has a B.S. in TV, Radio, and Film and loves working on screenplays that are emotionally driven and/or full of action. You can learn more about Abigail on her website.