Middle of a Story: 3 Questions You Need to Answer to Write a Gripping Middle

Nobody likes writing the middle of a story. 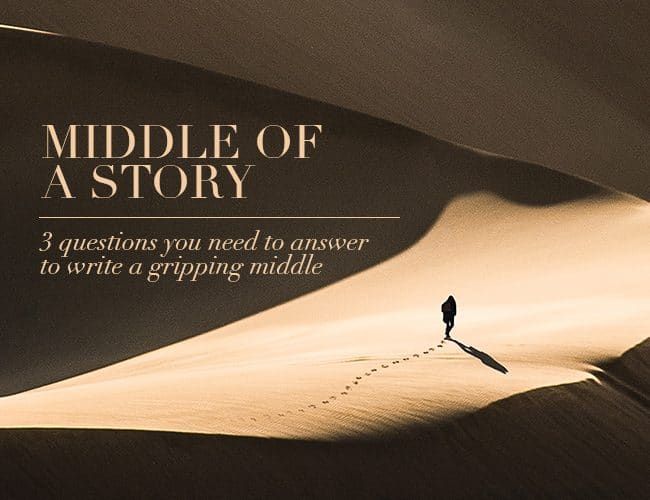 But your story needs to be told. You need to start and finish it with confidence.

And the way to write an amazing, page-turning middle to your book lies in answering three essential questions.

Ready for these fundamental questions that will make writing the middle of your story a breeze? Here we go:

1. Where is the story breaking its promises?

As I wrote two weeks ago, your story begins with a series of promises.

First, the story belongs to one person or a small group of people. This person or persons is the protagonist. And if you begin the novel by focusing on one particular protagonist, but casually pull a switcharoo, you’re going to confuse and lose a lot of readers.

Also, you will have established the external goal that the protagonist (or ensemble of protagonists) is pursuing. Now here’s the thing: You can change the object of desire.

But you can’t change the premise or genre that surrounds it.

As you write the middle of your story, it is imperative that you remained focused on the same protagonist and keep his or her objective in the same thematic boundaries.

Here’s an example of a story that doesn’t handle this well.

You open a crime thriller to meet Harry and Harriet, a couple of bank robbers out to get rich and retire young. In the early chapters, they stick up a couple of local smalltown places and pull in some nice profits. Then Harry suggests that they’re ready for the bigtime. Harriet, however, doesn’t think so, but Harry insists they do the job. Sure enough, Harriet’s fears are confirmed at the end of Act One: Harry gets killed in a shootout while Harriet barely manages to escape.

Then, Harriet decides to reevaluate her life. She mourns Harry but begins to question whether her life with him was really worth the risk. She changes her name to Sassandra, moves across the country, and begins trying to meet her next husband at PTA meetings. Just her luck, we meet Wadsworth, a British widower who soon becomes a new protagonist.

The author of this theoretical story did something that is completely acceptable in killing off Harry. It’s a huge loss that isolates Harriet and forces her to shift goals.

But her goals shift out of the genre, alienating every single reader who picked up a crime thriller for the purpose of reading a crime thriller. Suddenly we’ve arrived in the dramatic romance world where characters have dark pasts they’re trying to get over. The object of desire is completely different, and half of the novel’s voice goes to a guy that no crime thriller reader is interested in.

So as you write your novel, ask yourself: “Is my story breaking its promises?”

“
Your story sets up promises for your reader. In the middle, is it fulfilling those promises, or is it breaking them?
Tweet this
Tweet

Because when you start writing, you promise your reader that the story will be about THIS PROTAGONIST, who wants things in THIS PREMISE/GENRE.

Break those, and you’re going to lose readers fast.

2. Where is the story taking its foot off the gas?

Not only must you keep the promises you starting making on page one, but you must keep fulfilling them with energy and intensity.

One of the reasons writers tend to hate the middle of a story is that it feels vague and slow. The beginning and ending are (sometimes) easy to envision, but the journey between them is terra incognita.

First of all, let’s break down the metaphor. When a story takes its foot off the gas, the characters stop actively pursuing their goal. This is usually characterized by two things: An abundance of talking and an abundance of world-building.

“
Does your story feel slow, like it’s taken the foot off the gas? It’s probably because your characters have stopped actively pursuing their goal.
Tweet this
Tweet

Some artists can get away with. But not everyone can be J.R.R. Tolkien or Quentin Tarantino. To build the kind of audiences these authors have, we need to write fast, focused, and page-turning works that readers can’t put down.

The world is inundated with distractions that provide instant gratification. The days of crawling, sprawling works have passed (sorry, The Scarlet Letter). Yes, there is an audience for these kinds of stories, but it is small, particular, and hard to break into.

So hedge your bets and write a story that puts the pedal to the metal and keeps the reader hooked.

Here’s what happens when a story takes its foot off the gas.

Harry and Harriet stick up the big city bank. And while Harry gets shot, Harriet successfully helps him to the car and they blow town, leaving the flashing police lights in the dust. Now, in order to hide from the law, they hop from seedy motel to seedy motel, staying in the shadows while the heat dissipates.

There, in these dank corners of society, Harry and Harriet sit and talk. They share memories from their past that they’ve never told anyone. They debate about whether they can keep robbing banks and getting away with it. In a flashback, we see Harry’s first brush with the law as a young man, revealing his disdain for authority figures. Then, in a parallel flashback, Harriet’s origins are explored. We see an alcoholic step-father, an absentee mother, and an abusive brother.

This continues for five chapters.

This works for one chapter. Maybe two, if the first raises the stakes by creating conflict between Harry and Harriet. Harry needs to come close to dying as he bleeds out. Harriet needs to lose her temper and leave for the night, leaving Harry to wonder if he’s lost his partner and true love. Then this is interesting.

But long conversations about the past are not interesting.

“
The only time the past is interesting is when it directly impacts the present in a high-stakes way.
Tweet this
Tweet

What if Harriet’s father was shot and killed, and Harry’s injury causes her to realize she can’t afford to lose her partner? In this case, a brief flashback to her trauma — the sight of his blood, the screams of her mother, the smell of rain on the pavement as she watched him die — these details will make the present choice all-the-more relevant and important.

But to devolve into a long flashback without immediacy is simply selfish. This happens when a writer has built a world (and spent a lot of time doing it) and wants to show his or her work to the reader like a child to his teacher.

We all certainly crave validation. But these are our precious readers. We should only deliver our very best to them, and it’s probably not a long, low-stakes flashback or conversation about the past.

3. How is the story finding new ways to threaten, endanger, or discomfort its protagonist?

Now that your story is staying focused on the same protagonist or ensemble, keeping him/her laser-focused on achieving a goal within your chosen genre, and maintaining an upbeat tempo, you need to get a little sadistic.

The middle of a story is often the place where you will unintentionally resolve your story’s conflict, or make everything too easy. Sometimes we set out to write a novel, but find we’ve already arrived after 40,000 words. That’s because you’re letting your protagonist off easy.

The best stories always put the hero in a situation where the reader asks, “How is she ever going to get out of this one!?” And the only way to write such a story is to raise the stakes by threatening, endangering, and discomforting the protagonist in new, creative, and upsetting ways.

Does this sound mean? Am I being too cruel?

Believe me, I’m not. Because refusing to do this is an act of cruelty against your reader.

Here’s what happens when a story doesn’t find new ways to threaten its protagonist.

During their motel hideouts, Harry and Harriet decide to pull one more big job and then retire. “Just one more,” Harry keeps saying, and Harriet agrees.

They plan the heist together, coming up with an extremely clever plan. Harriet will disguise herself as an IT professional and infiltrate the bank to disable its security measures. Harry, meanwhile, plans to use the sewer system to dig a tunnel under the bank.

Harriet, from within the bank, will quietly order the bank manager to open the vault and fill her IT repair bag with cash. Then Harriet will find a way to drop the bag into the tunnel that Harry has built. When the police come to arrest her, Harriet will have no money and there will be no camera evidence proving her guilt.

They pull off the heist without any hitches and ride off into the sunset.

“
Stories are only worth telling because they’re about the day that something went wrong. A good story is never free of conflict and loss.
Tweet this
Tweet

“Hey, I found twenty bucks!” is not a story because nothing goes wrong. You simply nod and say, “Good for you.”

You could say the same thing about this bank heist. Everything is hunky-dory for Harry and Harriet. Their plan is flawless and leads them to get everything they wanted. Nothing goes wrong and nothing is surprising.

And it will disappoint your reader to no end.

One of the reasons that Oceans 11 is so thrilling is because you, the viewer, don’t know everything that the thieves know. The filmmakers tell you a little (there’s an acrobat hiding in the bank vault with explosives) but don’t tell you the rest (the SWAT team is actually the rest of the thieves). You as a viewer are left in suspense because it seems like our heroes will get caught or killed.

While you can and should definitely provide little moments of peace or respite along the way, you must continually push and punish and thwart your characters until the story’s absolute conclusion. Any other result will be a severe letdown for any reader who has been kind enough to read your entire story.

Keep Your Book On Track

Writing the middle of a story is never easy. You will have to consider and answer a thousand questions that are unique to the story you are telling.

But these three are non-negotiable. When you write a story that maintains its focus, keeps up the intensity (or even increases it), and continues to challenge its protagonist in new and surprising ways, you’ll have created a living, breathing world in the mind of your reader.

You’ll also have created a piece of storytelling that can compete with Netflix, YouTube, and everything else for your reader’s attention.

So write your story’s middle with confidence. Make sure you’re answering and addressing these questions, and you’ll deliver a page-turner to be proud of!

Think of your current work-in-progress, or a story you’ve already written but would like to revise. Take fifteen minutes to answer the three questions:

When you’re done, share your answers in the comments below. Be sure to leave feedback for your fellow writers!