How to Use Psychology to Write Amazing Stories

Psychology and writing go hand-in-hand. Both are about understanding how people think and act, and why. But you don't need a psychology degree to write a good story—just a curiosity about the people around you. 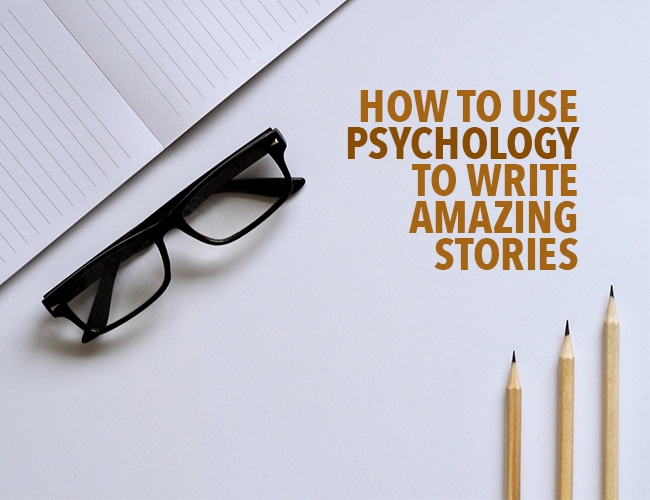 Maybe you’re a pantser. You dive into a story idea with a character that’s starting to come together in your mind. Three or four chapters in, the story starts to fall apart and you don’t know why.

Whatever the reasons, your story is in trouble.

Or, maybe you’re a plotter. You craft your story idea, sketching out the scene goals and events, working to lay the story out from start to finish. But at some point, you lose the thread, or the story elements aren’t coming together the way you wanted them to.

Could be the character you’ve developed isn’t the right one to deliver your story idea. Could be that parts of your idea are not based on realistic human behavior; they don’t ring true.

These are just a few of the ways you might find yourself with issues that need to be addressed if you are to write a story that grabs and holds reader attention. Insights into the psychology of human behavior may be just what you need to fix your story problems and right yourself on the path to successful completion.

The Doctor Is In

Remember the Charlie Brown comic strips? The enterprising Lucy one-upped the lemonade stand business model and parked herself at a booth offering “Psychiatric Help” for five cents. I remember one version where she added Opinions, also a nickel, Thoughts For The Day, ten cents, and Sound Advice for a quarter.

Like Lucy, I am not a psychologist. Nor do I play one on TV. I am just someone who finds the subject interesting and sees the value in it, as a writer. You’ll get my opinions and thoughts for the day for free, and I hope I can deliver some sound advice on psychology and writing, as well.

The study of psychology revolves around understanding why humans think, feel, and behave as they do. The resemblance to what we do as writers should be clear.

Realistic characters have history and family dynamics. They have strengths, weaknesses, and personality problems. They engage in internal monologues about themselves, their relationships, and the world around them.

Darian Smith puts it this way in The Psychology Workbook for Writers:

“Writers—the good ones anyway—are keen observers of human nature and they capture it in their characters and storytelling. They show the behaviors, the thought processes, and the ways people make meaning out of their experiences and events and turn these into provoking entertainment.”

You don’t need a doctorate in order to apply the benefits of psychology to your writing. People who are drawn to write fiction usually have an instinctual understanding of psychology, to a degree.

But like most worthwhile pursuits, practicing certain techniques will make psychological perception a more available tool in your writer’s toolbox.

Here are three areas of focus for combining psychology and writing:

Most writers are people watchers. We’re fascinated by the things people do, what they say, and especially any discrepancies between the two. The fictional characters we create tend to be “larger than life” in many ways, but they must also be based on the ordinary man, someone the reader can relate to.

Story is hardwired into our DNA. We all have an intuitive understanding of stories and what they mean to us.

When we think we’re reading just for the sheer fun of it, we’re actually learning and honing valuable skills. We are learning how to relate to the world, and to each other, so if the characters in the stories we read are believable, we attach to them on a variety of levels in order to learn what they can teach us.

To that end, make a habit of observing those around you and noting their behavior. What kinds of things do they say? How do they relate to each other? How do they solve the little problems life throws their way?

You may even want to record your observations in a notebook of some sort and refer back to those notes when you need to flesh out a character’s traits.

“
People watching is the writer's research. Make a habit of observing those around you and noting their behavior.
Tweet this
Tweet

Nonverbal communication speaks volumes. You are already adept at reading gestures, facial expressions, and physical movements. You have to be—it’s a survival skill we all develop.

But you can hone this skill beyond the ordinary, and learn how to use it effectively in your writing.

Ex-FBI agent Joe Navarro wrote a book on the subject titled, What Every Body Is Saying. He writes,

“Nonverbal communication can also reveal a person’s true thoughts, feelings, and intentions. Because people are not always aware they are communicating nonverbally, body language is often more honest than an individual’s verbal pronouncements, which are consciously crafted to accomplish the speaker’s objectives.”

When it comes to body language, think congruency. You can use nonverbal signals that are consistent with what your character says to reinforce their words, but you can apply it to even greater advantage by using it to belie what the character says, tipping the reader that all is not as it seems.

In Wired For Story, Lisa Cron gives this warning:

Grab your feather duster and explore your bookcase for volumes from yesteryear. Most of us have an old copy of Men Are From Mars, Women Are From Venus, or The Five Love Languages, or Your Erroneous Zones, or How To Win Friends And Influence People. Come on—it’s not just me.

Blow the dust off the cover and open it up. You don’t have to get very far into one of these books to see how you can utilize the concepts to create fictional characters that feel real.

If you really don’t have any such books, they’re easy to find. Peruse Amazon and get some samples sent to your eReader.

In the past, I've sometimes visited an interesting website called Psychology For Writers, hosted by Dr. Carolyn Kaufman, Psy.D. Sadly, I learned that she recently passed away and it seems her website is no longer active. However, she wrote a book on the subject, The Writer's Guide To Psychology, which is still available. And here's the link to an interview she did with Joanna Penn.

My mentor, Dean Wesley Smith, suggests what he calls “typing in” exercises. This is where I find something that another writer has done remarkably well—a superb opening paragraph, a nail-biting cliffhanger, whatever—and type it into my own manuscript form.

The purpose is not to ever use those words, but by typing it in as the original writer did, I get a better sense of how the writer did it and by consciously applying and practicing this skill, it moves past my front brain and into my back brain where it becomes instinctual.

The same thing will happen when you apply the psychology you learn from other sources. By learning and applying knowledge of psychological theories, you will gradually integrate it into your instinctive writing behavior.

All Different, and Yet the Same

We are all individuals, distinct from one another and different in many respects, but we all share similar cognitive and emotional inventories. Each of us has experienced fear, anger, humor, guilt, love, lust, hate, disgust, longing, and a myriad of emotional variants.

The characters we create will be based on what we know, and will be processed by readers according to their similar experiences.

When you make a connection like that with your reader, the effect can linger long after the book is closed. A knowledge of psychology can help you do that.

Are you a people watcher? Do you use body language effectively in your writing? What old psychology books are collecting dust on your shelf? Tell us about it in the comments section.

For today's practice, you have two options.

At your desk: Think of the last conversation you had with someone and write down everything you can remember. What did you talk about? What did the other person say, and how did they say it? What was their body language?

Take fifteen minutes to record as much as you can.

In the wild: Go to a public place, such as a grocery store, a park, a coffee shop. Observe and listen to the people around you. Watch their interactions, their mannerisms, their body language. Listen to their conversation, their tone of voice, their verbal tics. Like a student in a classroom, make notes of everything you notice.

Then, take fifteen minutes to write about a character or a situation that arises from what you’ve just observed.

When you’re finished, post your practice in the comments section. And if you post, please leave feedback for your fellow writers!