Purple Prose: How to Know If Your Prose Is Purple

You might have heard the writing advice, “Don't write purple prose.” Or perhaps you've even been told your prose is purple, but you're not quite sure what that means and if it's really a bad thing.

What is purple prose? Is it really bad? And how can you fix it in your writing? 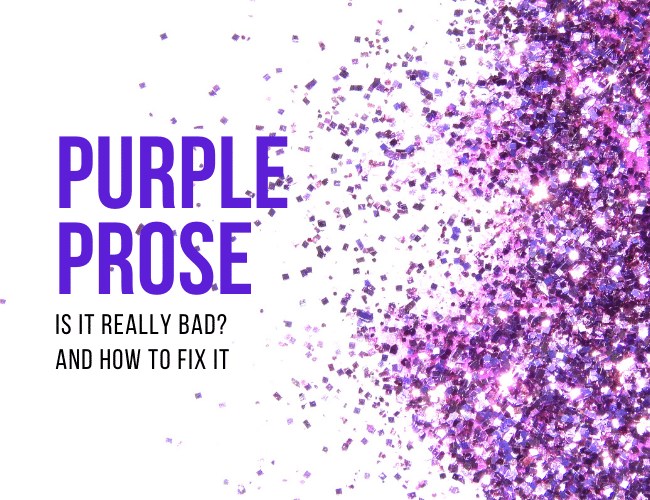 What Is Purple Prose?

Purple prose is writing that is considered too wordy, formal, or needlessly poetic, bringing attention to itself and the author rather than what the author is writing about.

Where the Term “Purple Prose” Came From

Purple prose is one of the oldest pieces  of literary advice, coming from the poet Horace just before the first century AD. He said:

Weighty openings and grand declarations often
Have one or two purple patches tacked on, that gleam
Far and wide, when Diana's grove and her altar,
The winding stream hastening through lovely fields,
Or the river Rhine, or the rainbow’s being described.
There’s no place for them here. Perhaps you know how
To draw a cypress tree: so what, if you’ve been given
Money to paint a sailor plunging from a shipwreck
In despair?

Did you catch that? In case you don't understand ancient Latin phrasings, he essentially said, “Great speeches often have one or two sections of purple prose that don't belong.”

Even better, he gave this advice with an amazing example of purple prose, speaking about a river in Gaul, a Roman goddess, and a shipwrecked sailor.

There are several reasons readers and critics find purple prose annoying. Here are a few:

1. Purple Prose can distract from the main point of the message.

Horace, in his quote above, seems most annoyed by the fact that these “purple patches” distract the reader from the central point they are trying to express. As he says:

Perhaps you know how
To draw a cypress tree: so what, if you’ve been given
Money to paint a sailor plunging from a shipwreck
In despair?

In other words, “Maybe you are a great writer who can perfectly describe a tree in poetic detail. But why are you writing about a stupid tree when your story is about a guy drowning in the ocean?”

Make sure to use your skills to write about what matters for your story.

Purple in ancient Rome was a sign of royalty and wealth—and by extension, pretentiousness. If you were wearing purple, you were putting yourself on top of the social hierarchy, and intentionally showing other people you were not only important, you were better than them.

Purple prose can come from a similar intention. You the writer are trying to make yourself look talented and important, but in so doing, you can make the reader feel stupid.

Some readers genuinely prefer writing that is minimal and gets to the point quickly.

If I started to write elaborately, or like someone introducing or presenting something, I found that I could cut that scrollwork or ornament out and throw it away and start with the first true simple declarative sentence I had written.

Hemingway, who is often held up as an example of a minimalist writing style (and even has an minimalist editing tool named after him), believed that purple prose distracted from the truth, and that a writer's main job was to write the truth. Never mind that Hemingway was sometimes the purplest and wordiest of writers. 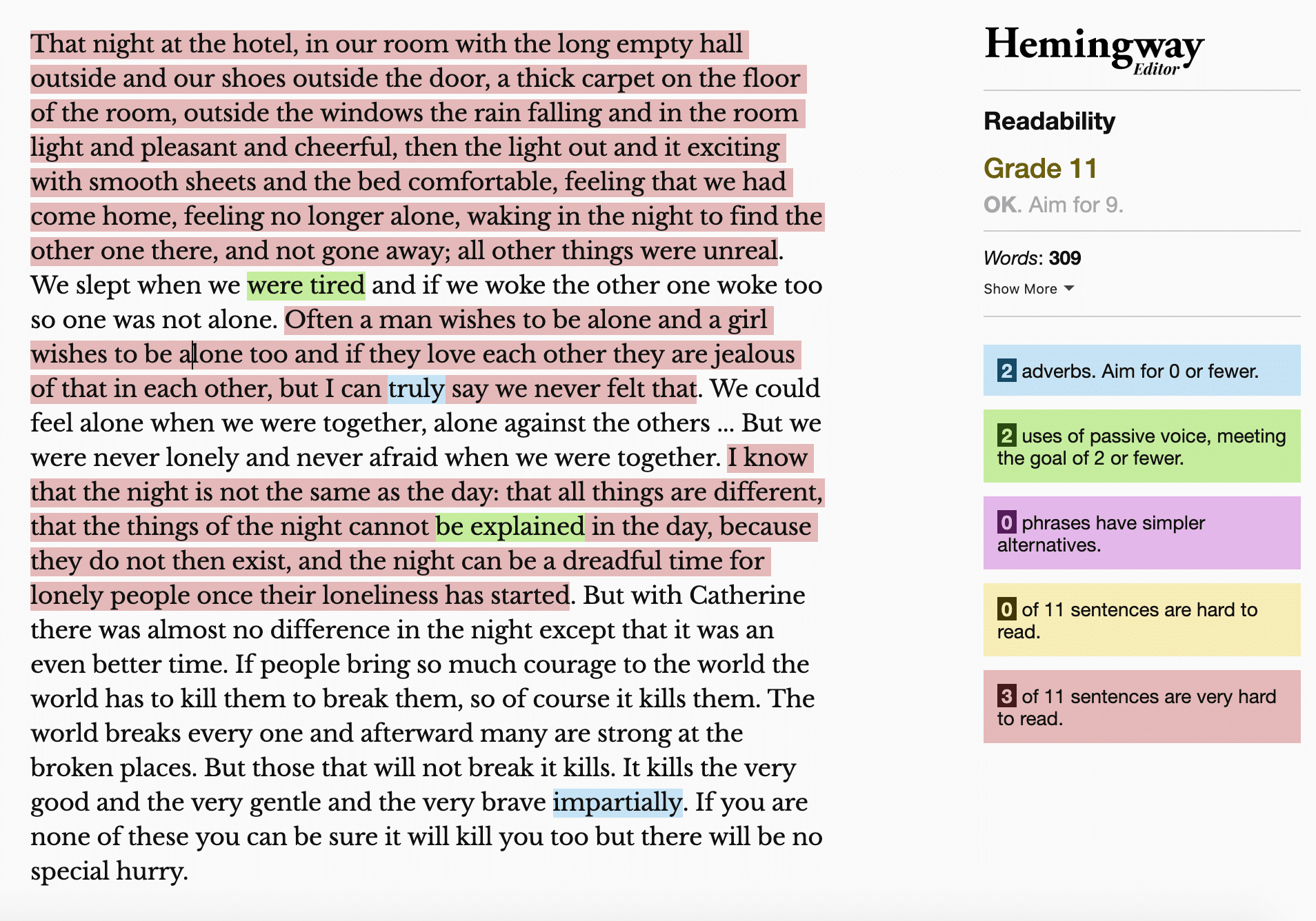 See? Hemingway just did ok in the Hemingway App test.

At the same time, not all descriptive, “wordy” writing is bad, especially if you're committing to a specific style or if you're using it to accentuate particularly important passages.

Some of my favorite writers have been accused of purple prose, including:

And even Ernest Hemingway himself!

Is It Ever Okay To Write Purple Prose?

Purple prose is sometimes used for comic effect. In A Knight's Tale, the character of Geoffrey Chaucer embodies this (and is hilarious), and it's poked fun at in episodes of Friends and Community.

Purple prose can also work in climactic moments in your story to emphasize what's happening.

If you like to write in a more poetic style, that can be fine! Just be sure to keep the focus on your story not just your writing, and be ready for criticism for the minimalist style camp.

How to Avoid Purple Prose with Hemingway App

While I prefer ProWritingAid for general writing and grammar help, the best writing software to avoid purple prose is Hemingway App. Here's how you can use it to edit your writing:

2. Copy and paste your writing into the editor.

3. Hemingway app will automatically test your writing for readability, highlighting any problematic sentences red. For example, it didn't like my definition of purple prose! 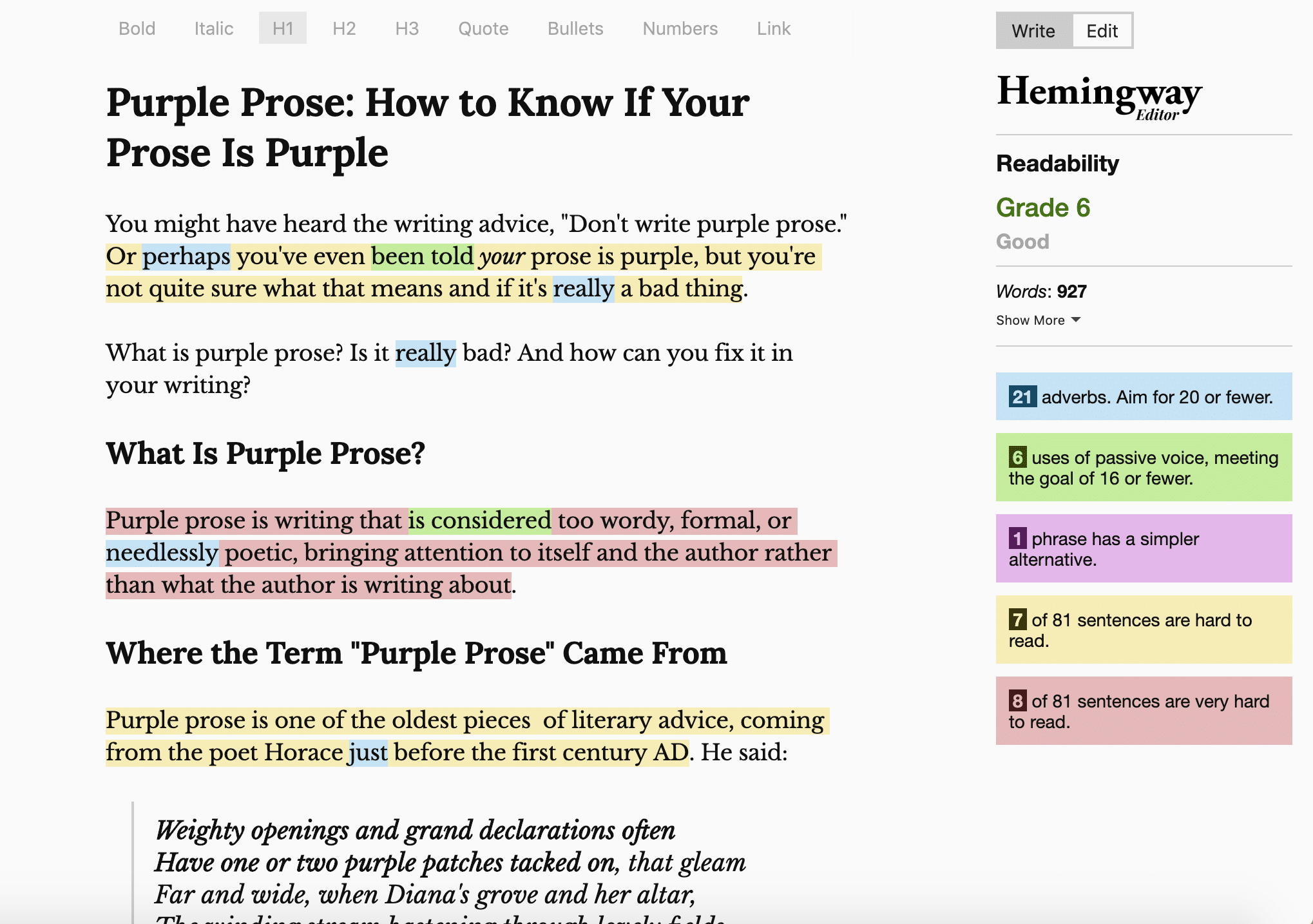 Overall, though, I got Grade 6 reading level, which Hemingway App says is good. Give it a try!

How do you feel about purple prose? Let me know in the comments!

Ready to practice purple prose? Here's a creative writing prompt you can use to try it out.

The classic example of purple prose is the line, “It was a dark and stormy night.”

Using that line as inspiration, write for fifteen minutes entirely in purple prose. Create an elaborate detailed scene in which nothing happens. Post your work in the comments and take some time to read and give feedback to at least three other writers.