Do you want to capture your readers’ attention, rivet them to the page, and leave them clamoring for more? Using the Rule of Three in your writing is one way to meet reader expectations and engage reader interest. 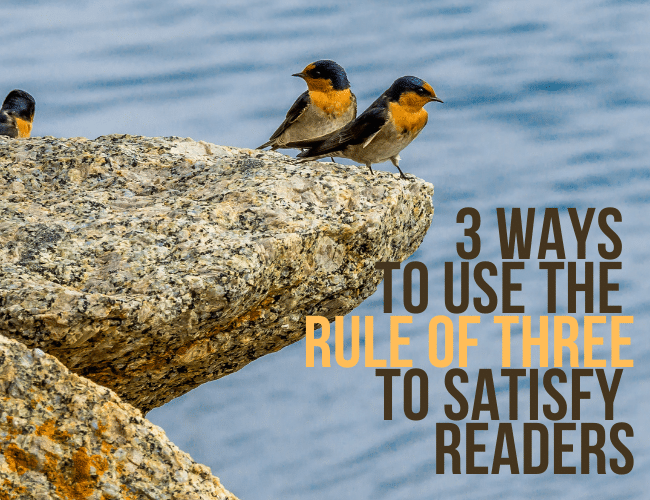 It can satisfy readers.

It can create something that moves people, deepens their understanding, and keeps them thinking about your story long after they’ve devoured the last word.

But how do you apply this rule into your story naturally? Is it right for your book?

Why You Should Care

Somerset Maugham said: “There are three rules for writing a novel. Unfortunately, no one knows what they are.”

I bring this up because I want to make the point that there really are no rules when it comes to fiction writing. But there are time-honored traditions so ingrained in our culture and conscience that it would be foolish to ignore them.

“
There really are no rules when it comes to fiction writing. But there are time-honored traditions that are deeply ingrained in our culture and conscience, and it's worthwhile to pay attention to them.
Tweet this
Tweet

Some of these are the genre conventions and obligatory scenes so critical to providing a pleasing experience for the reader.

Others are broader in scope, reaching far across genre boundaries to encompass many aspects of a reader’s life.

One of these is the Hero’s Journey. David Safford has written an excellent series of articles exploring this topic, and I encourage you to check them out.

Another of these far-reaching customs is known as The Rule of Three.

What Is the Rule of Three?

You don’t have to be a fan of Schoolhouse Rock to know that three is a magic number. Listen to a persuasive speaker, and you’ll hear him engage the Rule of Three time and again to drive home his points, motivate his audience, and boost their memory of his words. (See how I just did that?)

Or at least it seems that way, because the convention is so deeply entrenched in our cultural expectations. You can see reflections of this everywhere. The Holy Trinity. Life, liberty, and the pursuit of happiness. Truth, justice, and the American way.

We see it all the time in our fiction, too.

The three-act structure, beginning, middle, and end. The Three Little Pigs, the Three Amigos, the Three Musketeers. Grouping things in threes not only provides rhythm and balance, but also invokes a powerful subconscious expectation.

Overall, the Rule of Three is the art of setting up and fulfilling a three-part pattern. It is a writing principle that is based on how people comprehend and retain information based on patterns. And like the number four, it is a small number that allows us to remember important details while also creating potential for growing conflict in a plot.

Unlike the number four though, odd numbers tend to be more interesting.

Let’s take a look at some of the ways we can use the Rule of Three in our writing.

When you have two characters, A interacts with B and B interacts with A. Certainly there can be tension, but it’s difficult to sustain in an interesting way.

Add a third character, and you’ve just deepened the dimensions of your plot significantly. Now we’ve got A to B, A to C, B to A, B to C, C to A, and C to B.

This provides plenty of scope for adding and escalating conflict.

Introducing a fourth character to the mix can sometimes be too much, making it hard for the reader to keep straight, but three is perfect. Why do you think triangles are so popular in literature?

Let’s take a look at some examples.

Katniss is torn between two loves, Gale and Peeta. Each of these men brings out something good in her, fulfilling a need. The ongoing tug of war between what she thinks she wants and what she ends up with creates a compelling dynamic that carries the story through three novels.

Also known as the love triangle, this is an excellent way to apply the Rule of Three in any story, as a main storyline or subplot.

Like The Hunger Games, the interactions here are primarily between Ilsa and her two lovers.

The story centers on themes of desire vs. honor and sacrifice for another’s happiness. Without Laszlo providing a third side of the triangle, Rick and Ilsa’s dramatic conflict would be considerably flatter.

The story needs the tension. It, once again, creates tension by forcing characters into tough corners that demand hard decisions.

Sam dies, creating a gulf between him and Molly that only Oda Mae can gap.

Though it manifests well in character dynamics, the Rule of Three applies to so much more than love triangles alone.

Because it’s so ingrained in us, we instinctively seek it out and it thereby seizes our attention and perks our interest.

Here are three other ways you can use the Rule of Three in your writing to strengthen your story.

Story is about a character, in a setting, with a problem.

The character embarks on a series of try/fail cycles. The number of cycles and how long this goes on will vary from story to story, but the reader is subliminally programmed to expect three.

The character makes an attempt and fails; tension is the result.

When the character tries and fails a second time, the tension is heightened. Success on the third try feels right. Four attempts at the same feat is heading toward tedious.

Think Goldilocks and the Three Bears. Once is too easy; twice still doesn’t cut it. Three times is just right.

There are a couple of aspects to think about in this regard.

Scientific research suggests that humans remember things best in groups of three. Also, our brains like to recognize and analyze patterns.

One point appears random. Two points don’t necessarily correlate. But when a third point of data is added to a scenario, a possible pattern forms, focusing the brain’s attention.

The other aspect is that readers tend to remember something that comes up three times, so you can use this to set up for later payoffs. Mention something early on then bring it up again down the road and you’ve set up an expectation in the reader’s mind.

They remember and anticipate that third appearance.

Public speakers and comedians use the Rule of Three all the time to deliver important points and punchlines.

You can do it, too, in your writing to spring a surprise. Establish those first two points to get your reader anticipating a third, then twist it.

I discussed this in my article 5 Side-Splitting Ways to Infuse Humor Into Your Writing, and I hope you’ll give that a read. But here are a few short examples of the technique.

“There are three kinds of lies: lies, damned lies, and statistics.”
—Benjamin Disraeli

“There are three principal ways to lose money: wine, women, and engineers. While the first two are more pleasant, the third is by far the more certain.”
—Baron Rothschild

“Three things your spouse wants you to do in the event of an argument—take a breath, take a hint, and take a hike.”
—Joslyn Chase

The Rule of Three can add conflict and dynamic to your plot. It can challenge your protagonist to make decisions and face consequences.

The Rule of Three can fill gaps in your story's content, and pull your readers into emotional moments that they will remember long after they're over.

Now that you have a firmer grasp on the Rule of Three, you are ready to go forth and conquer!

Just be sure to remember the rule, know how to use it, and have fun!

How about you? Do you notice the Rule of Three in the books and movies you enjoy? Do you use it in your writing? Tell us about it in the comments.

Let’s write a scene using the Rule of Three. Choose a prompt from below or come up with your own idea. Write a scene where the character makes three attempts to solve a problem, escalating the tension after each failure, and ending with success on the third try.

Write for fifteen minutes. When you’re finished, post your work in the comments and be sure to leave feedback for your fellow writers! Commenting on three writers' stories sounds just about right, don't you think?