How to Write a Scary Story: 3 Strategies for Terrifying Scenes

For many of you, Halloween is a time to dream up frightening stories with scenes that thrill and startle your readers. It’s the perfect moment to practice how to write a scary story. 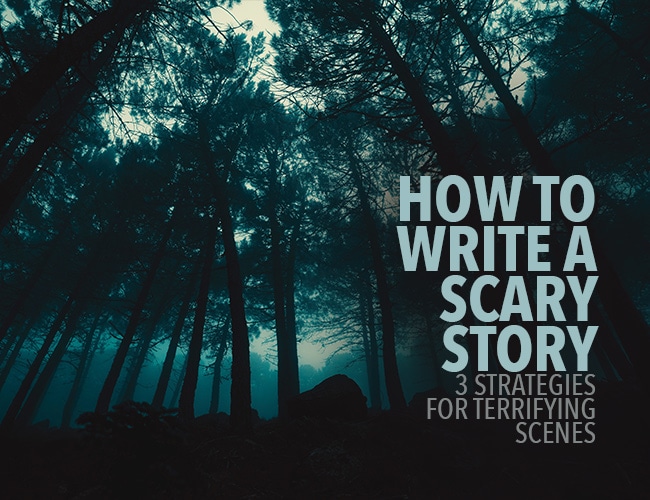 Yet writing a scary scene is easier said than done. To truly scare your readers, you need to be one step ahead of them. If they can predict what’s coming, or if the story doesn’t feel scary, then your writing won’t work.

Here’s how to write a truly scary scene that your readers will love!

How to Write a Scary Story: 3 Keys for Frightful Scenes

The key to a well-written scene that frightens your readers isn’t just about gore or shock value. And despite the popularity of modern horror movies, jump-scares don’t really work in book form. (I personally find them to be cheap, poor storytelling tricks.)

Rather, you need to capture the essence of the fear and portray it with authenticity. Gore for gore’s sake inspires disgust, not fear. Jump scares cause the fight-or-flight reflex, not terror. And monsters are a dime-a-dozen these days, as computer graphics can render practically any nightmare in stunning high-definition.

So let’s look at three aspects of fear, and how to use it in your scary scenes.

If your goal is to create fear, what is the opposite of fear?

Perhaps the most fertile ground for a scene of terror is a trusting relationship. Spend time in your story creating a relationship between characters where trust is a key ingredient, and then use your scary scene to betray that trust. That’s how to write a scary story that truly delivers.

Avoid the predictable (or frustratingly unpredictable) betrayal twist (think Hans from Frozen), and instead look at ways that the horror can undo this trust from within. The more your monster, disease, haunting, or murderer can fray the trust between characters, the more genuinely frightening your scenes will be.

A story that does this better than practically any other is The Shining. At its heart, The Shining is a story about a family riddled with mistrust. Each relationship is made or broken by trust, including relationships within each character’s own mind. There are almost no cheap jump-scares in The Shining, either, and the film leaves the viewer horrified not just because of the violence or creepy imagery, but because of the frailty of the human psyche.

So build your scary story relationships on trust and find clever, creative ways to make them unravel. A killer from within is much more frightening than one from without.

One of my favorite villains is the T-1000 from Terminator 2: Judgement Day. Slow, methodical, and patient, this murder-machine knows it has an eternity to fulfill its mission. He watches, studies, and inexorably paces forward. And when he skewers his victims to interrogate them, he asks his questions with dreadful patience.

While the chaos of a drooling, ravenous monster is certainly frightening, there’s something about the patient killer that works on a psychological level to produce dread.

As the Joker, another powerfully written monster, says in The Dark Knight, “Do you want to know why I use a knife? You see, guns are too quick. You can’t savor all the little . . . emotions.”

This is why jump-scares feel so cheap to me. There is definitely a time and place for them, and they work best when used rarely. But for my money, nothing is more terrifying than a killer, monster, or pestilence that creeps slowly toward its prey, or waits in the darkness, and delights in studying the heinous act it’s about to commit.

Wondering how to write a scary story? Make your killer patient and menacing, forcing your protagonist — and your readers — to endure their impending doom for an age rather than a moment.

When the big scary moment in their story arrives, many writers make the mistake of leaving their protagonists behind. They’ve been dreaming of this moment, when the monster or killer reveals itself in all its horror, and forget about the needs of their reader.

I’ve read a lot of these scenes as a contest judge, and it’s disappointing to see so much potential wasted.

The key for how to write a scary story is stay intimately focused on the protagonist’s experience, and to pace the scene in a way that the reader can follow and feel fear with your protagonist.

Start with the moment of revelation. What does the protagonist see, hear, or feel as the scary event begins to happen? What does he or she think, and want to do in order to learn more to begin escaping?

Then escalate the situation hard. This is where things can get really horrifying. Someone’s head pops off. Blood gushes from the air ducts. Flesh melts away. A lover unveils an ax. You get the idea.

But show it from the point of view of the protagonist, and don’t use any adjectives or descriptions that are inconsistent with your protagonist’s character in the rest of the story.

This advice seems obvious until you actually sit down to write the scene. It’s easier said than done because the temptation to “tell” these details, and to bust out your MFA with shiny imagery and such, is overwhelming. We forget the most important job of a writer: To tell a story for your reader.

And one way to ruin an otherwise scary scene is to abandon your protagonist and simply make him or her an observer, watching something gory or disturbing. Don’t fall victim to this amateur trap. Keep the scene intimate to your protagonist’s experience to produce something truly horrifying!

“
Make sure every detail in your scary scene comes from the protagonist’s point of view. That way, the reader will experience your protagonist’s terror right along with them.
Tweet this
Tweet

Practically every great scary story has these three things in common.

The story focuses on a situation or relationship where everything seems fine and trustworthy, but slowly erodes into horrifying chaos. The best monsters, from the creature in Alien to the serial killer John Doe in Se7en, are patiently cunning in their evil deeds. And these stories stay close to their protagonist, forcing the reader or viewer to experience everything through this character’s eyes and ears.

Now, it’s your turn to practice how to write a scary story. Skip the cheap jump-scares and dodge the gratuitous gore. It’s time to scare somebody!

Have fun, and Happy Halloween!

Do you have any tips for how to write a scary story? What frightens you most in a scary scene? Let us know in the comments.

Take fifteen minutes to practice the third principle, protagonist intimacy. Write a scary scene where your protagonist is in a terrifying and dangerous situation. Remember to focus on the details your protagonist would notice, keeping the scene entirely in their point of view.

Here’s a prompt to get you started: Jane knew she was alone in the house. So where was that long, slow creak coming from?

When you’re done, share your writing in the comments below. Then, be sure to leave feedback for your fellow writers! What scared you about another writer’s scene?