Literary Crisis: Why a Dilemma Will Make Your GOOD Story GREAT

You've turned to literature in times of crisis and dilemma, but have you considered how important a crisis or dilemma is in literature?

After you finish writing a book, you should be proud. You're probably excited. Visions of publishing dance in your head. But then you go back and read your story or novel or book, and you think, “Well, this is good and I feel proud of it. But it doesn't match up to the stories/novels/books I know and love.”

You wrote a GOOD story, but not a GREAT one. Worse, you don't know why. In this post, I'll explain exactly what to look for to make your good story great. 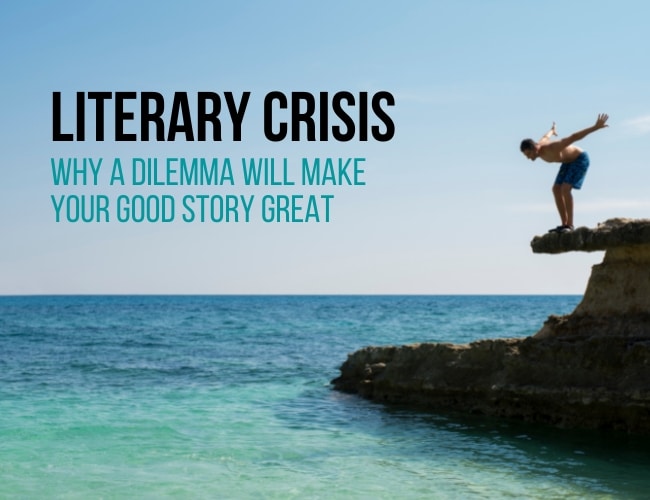 Note: this article contains an excerpt from my book The Write Structure, which is about the hidden structures behind bestselling and award-winning stories. If you want to learn more about how to write a great story, you can get the book for a limited time low price. Click here to get The Write Structure ($5.99).

How I Wrote a GOOD but not GREAT Book

A couple of years ago, I finished the memoir I had been working on for over two years. After I finished, I read it, and while I thought it was ok in some parts and really good in others, there was something missing. It was GOOD but definitely not GREAT.

And I had no idea why my book wasn't working. I spent a month trying to figure it out. That month turned into two, which turned into four. I still hadn't figured out what was wrong.

Honestly, there were moments when I thought I would never figure it out. I worried the book would never be published, that the years of work would be wasted. I thought about all the readers waiting for the book, how flaky I would look when I told them that I had decided not to publish the book because it wasn't any good. I was sinking into depression over it.

My author friends couldn't understand why I didn't just publish it. “You'll write another book that will be better. Just publish this and get started with your next one.” It was good advice. I knew that if I were in their shoes, I would say something similar. But even as I didn't know how to fix the book, I couldn't let it go either.

The Secret to Great Books

I had a breakthrough when I went to the Story Grid workshop in New York City led by Shawn Coyne. He's Steven Pressfield's editor, the author of The Story Grid, and the creator of the Story Grid podcast.

I went to the workshop skeptically—attending mostly because my friend Tim Grahl was helping to run it. I had read the book before and listened to a few podcast episodes, but I honestly wasn't expecting to be radically transformed by the workshop. I've been studying writing and storytelling for over a decade. I thought I might get a few good tips, but I didn't believe Coyne or anyone else would have that much to teach me that I hadn't heard before.

I was wrong. The workshop completely changed my writing and editing process. Since then, the Story Grid has become a constant when framing working the structure of my story.

I also finally knew why my good book wasn't great. I finally understood why my story wasn't working.

My story lacked a dilemma, what Coyne calls a crisis

Definition: What is a Literary Crisis or a Dilemma?

A literary or story crisis, also called a dilemma, is a the crucial moment (or moments) when a character is confronted with a significant choice that will change the trajectory of their life.

I find that people get confused with the term “crisis,” though, so in The Write Structure framework we call this element the dilemma.

You may have heard that in a good story your protagonist must make a decision. I knew this, but what I was lacking was how to set up that decision. The dilemma is the moment where your protagonist is placed into such a tight spot that he or she has to choose, and importantly, that decision carries so much weight that there is no turning back from it.

This choice represents how a character is forced between opposing forces, internal or external, and the only way to move forward is by making a difficult decision.

In other words, a dilemma is drama.

Why a Dilemma Is the Foundation to Your Story

Have you ever been reading a book when you find yourself thinking, “There's no possible way this character can get out of this situation! This is just too bad. They're in way over their head, and there is no getting out of it.”

THAT is a literary dilemma. And readers love this moment. Why? Because we want to know what happens next!

A dilemma sets up a knowledge gap, and readers become desperate to fill that gap. It's in moments like this that readers are tempted to skip to the last page in the book just to find out if everything turns out ok (not that I've ever done that, of course).

“
If you want to write a good story, you need to understand how to create a dilemma.
Tweet this
Tweet

Where Dilemmas Happen in Your Story

Crises are the foundation of your story.

Crises are questions, they're dilemmas, and since they're happening in a character's head, they usually occur “off screen.” In other words, they're implied but not specified. BUT you the writer still need to know what the literary crisis is in every story you write.

Where does the dilemma occur? The dilemma occurs directly in the middle of your story, specifically following the last complication that occurs in the Rising Action, or an action or revelation that forces the character, probably the point of view character, into a crisis decision. In The Write Structure framework, it looks like this.

A good example of this is the film Gravity (which is amazing, if you haven't seen it). Sandra Bullock's character's problem is that everything is trying to kill her. The progressive complications get worse and worse until *spoiler alert* everyone is dead except for her.

This is where many writers would stop. They would show her struggle to survive and resolve it by eventually getting to a place where she does, in fact, survive.

But what makes this story GREAT rather than good is that her character reaches a dilemma. Finally, it becomes clear that she is definitely going to die. She is faced with a best bad choice situation: take her life into her own hands and end her own life OR keep fighting to survive even though she will suffer and almost certainly die anyway. (If you've seen the film, this is that moment when George Clooney reappears.)

This dilemma is so important because it gives the character the chance to make a choice. Fighting for survival isn't a choice. Who wouldn't fight to survive? But when it becomes easier to stop fighting than it is to just die, then it leads to the crisis.

The Two Types of Dilemmas

In The Story Grid, Coyne says crises are always a choice that your protagonist faces, and they come in two easy-to-follow formulas:

You can recognize these situations in your own life, right? We've all been through these crisis moments, and the choices we make in the midst of them carry outsized consequences when compared to most of the little decisions we make in our lives.

In my own writing, I use these two formulas to write great scenes, but also to audit scenes, stories, and even whole books I've already written to make sure I'm setting up a big enough story crisis.

For example, in the memoir I wrote, I realized it wasn't working because I didn't have any clear dilemmas. Things just happen. I didn't set up clear literary crises, and therefore the choices my character was making didn't matter. Since the book is a memoir, I couldn't manufacture story crises, and so I had to pull them out of my actual experience.

One that I discovered in the first act of my story was a Best Bad Choice dilemma. In Paris, I wanted to live the “writer's life,” where I hung out in cafés, drank coffee and wine, soaked up the atmosphere, people-watched, and wrote my book. But when my readers gave thousands of dollars to make me take on crowdsourced adventures, I had to choose between either refunding them money and being embarrassed or giving up my comfortable, “writerly” trip for an uncomfortable (but maybe more interesting) one.

I was able to take a dilemma that I was experiencing privately and turn it into a literary crisis that centered my story.

Is your story risky enough? Is your protagonist making life and death decisions? Is he or she making decisions at all?

How can you heighten the risk of those decisions? How can you put him or her into a best bad choice or irreconcilable goods situation?

If your character is just going along with everything, your story might be good, but it will never be great.

Have you ever faced a best bad choice or irreconcilable goods crisis? Tell us about it in the comments.

Set a timer for fifteen minutes. Go back to a story or scene you've written and evaluate it.

Write out the story crisis using one of the two crisis formulas (i.e. best bad choice or irreconcilable goods).

If you are already a Write Practice Pro member, post your practice here in the Practice Workshop for feedback. Be sure to give feedback to a few other writers and encourage each other.

Not a Pro member yet? You can join us here as a Write Practice Pro monthly subscriber and see what a difference a professional writing community can make as you pursue your writing goals!