How to Keep Score in Your Story With Scene Goals

Imagine attending a football game with no rules. I don’t know about you, but there’s a limit to how excited I could get about watching a bunch of men run around with no particular aim in mind. Really, except for the tight pants, it would be pointless. 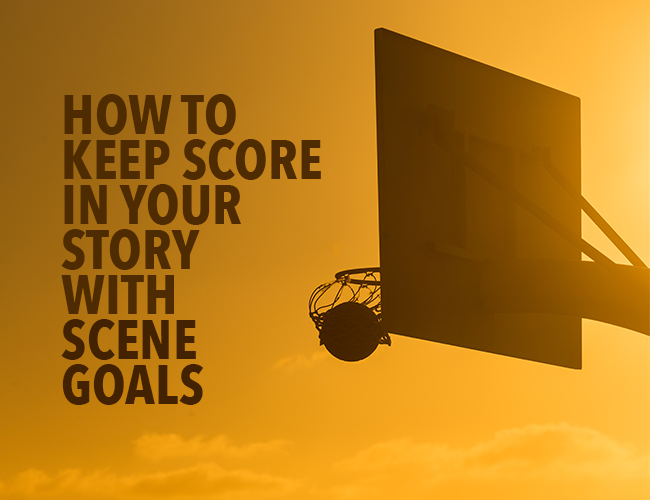 What makes the game worth watching is knowing your team has a goal, and knowing there’s an opposing team aiming to stop them from achieving it. That’s what pulls you to the edge of your seat, screaming and pumping your fist in the air.

It’s the same when you read fiction. If the writer hasn’t told you how to keep score, you have no way of knowing whether the characters are drawing nearer or farther from accomplishing their goals, and little reason to care.

So when you’re in the writer’s seat, make sure that doesn’t happen.

Set a Goal for Every Scene

A story is about a character who wants something, and how they deal with the obstacles that stand in their way of obtaining it. Each scene must move them closer to the goal or farther from it. This being the case, readers need to know your character’s goal, or the events of the scene will amount to a bunch of sweaty men running pointlessly on the field.

For example, at the beginning of the movie Tootsie, Michael Dorsey’s goal is to raise $9000 so he can produce Jeff’s play. As the story progresses, his goal becomes winning Julie’s love.

It’s best to establish the ultimate goal early in the story, and the scene goals at the beginning of each scene. These don’t need to be baldly stated, but they should be clear to the reader.

“
A story is about a character who wants something, and how they deal with the obstacles that stand in their way of obtaining it. Each scene must move them closer to the goal or farther from it.
Tweet this
Tweet

Just like when you set goals for your own life, the ultimate goal must be broken down into a series of intermediate goals. Let’s look at an example.

Of course, it doesn’t work out that way, and as conflicts arise and circumstances change (a lot!), Steadman’s goals change, too, so I had to let my readers know how to keep score.

Readers turn the pages to find the answers to story questions that arise. No questions, no page turns. Keep supplying the questions, and as answers are uncovered, introduce new questions.

And all the questions come down to this: Will the character achieve her goal?

Remember that your protagonist is not the only one with goals. Every character that figures into your story has goals they are striving to meet. It’s the conflicting directions of those goals that make the story.

Storytelling is the revealing of information. The way you deliver that information is known as information flow. In regard to goals, there are three key areas to keep in mind.

Beware the common mistake of thinking the goal is obvious when it’s not. Don’t spoon feed it to your reader, but make certain they understand your character’s goal.

No character should be in a story just because you need them to be there. Each character on the page needs to have their own reason for being there and their own goal to accomplish.

For example, if your character’s boat sinks and she’s clinging to her last bit of flotsam when another boat appears out of nowhere, it will seem contrived and won’t sit well with your reader.

But if the driver of that second boat has come out to check his lobster traps, with the goal of taking a catch of lobsters to market, the scene is more believable. Give every character a goal.

Once your reader knows how to keep score, she can scoot to the edge of her seat and cheer your character home.

Have you noticed how you “keep score” when you read a book? Ever tried to read a story without goals? Tell us about it in the comments.

Use your work in progress or choose a prompt below. Write a scene, making sure each character in the scene has a goal that the reader knows about and that by the end of the scene there has been movement bringing the characters closer to, or farther from, their goals.

Jill wants her dream job as hairdresser to the stars.

Ben wants Melissa to marry him.

Trudy wants to run in the Boston Marathon.

Write for fifteen minutes. When you are finished, post your scene in the comments, and be sure to leave feedback for your fellow writers!