As writers, we are always working to make our stories the best they can be. One of the more advanced techniques that can help you do this is by adding an underlying meaning in a scene—otherwise known as subtext. 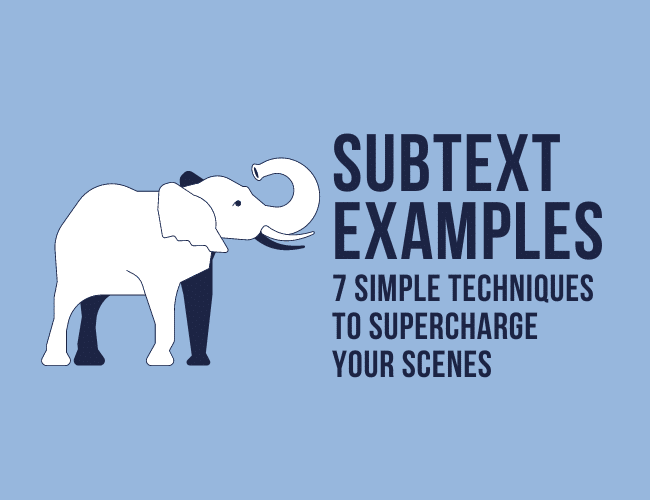 In a story, subtext  can be implied by the surface action and dialogue.

When you think about the books and stories that you most enjoyed reading, chances are that story’s scenes were woven with something deeper than what appeared on the surface.

Today I'd like to teach you seven simple techniques for using subtext in your story, which I'll also teach with some subtext examples.

Like a puzzle, subtext puts the reader’s brain to work, piecing together clues to arrive at the emotional truth of the scene. It makes the story more engaging and more memorable for the reader because the truth of a scene lies not in the words, but in the crux between word and action.

Sometimes, direct dialogue serves your purpose best, but there are situations when your writing will take on greater impact if you keep it a little “off-the-nose” when writing dialogue. In fact, that's how real dialogue, in real life, often works.

This can be difficult because it means trusting your reader to pick up on the significant subtextual cues, but it’s an important step.

When Should I Use Subtext?

Two specific types of situations are spectacularly well-suited for subtext. They are:

1. When the character has too much to lose by being direct

When intense emotions—like love, hate, anger, and desire—are involved, we’re often afraid to express ourselves openly. It’s too risky. We don’t want to lay it on the line, so we hedge.

That’s what your characters will do, too, when you employ subtext in such a scene.

2. When you want the reader to be an active participant in the scene, actually experiencing the events

Because of the underlying puzzle, a scene with subtext engages the reader’s brain, giving them an active reading experience, encouraging them to gather and interpret clues to what’s going on beneath the surface.

Feeding the reader direct dialogue or telling them what’s going on directly denies them the opportunity to participate, discovering the meaning of the scene for themselves.

Leave some tantalizing blanks for your reader to fill in.

But what does using subtext mean?

Subtext is the unspoken, less obvious, and sometimes hidden meaning beneath the words and actions in a scene. It becomes understood as the scene and story progresses, revealed to the reader through subtle cues.

Subtext occurs when the words don’t match with the actions, and we all know what that means: actions speak louder than words.

Filmmakers are fabulous at capturing meaningful subtext in their scenes, capitalizing on effective screenwriting to pull viewers beneath the surface where they can appreciate a deeper significance.

Perhaps the best way to illustrate subtext is by looking at some examples. Follow the links to watch these film clips and get a better grasp of what I mean by subtext.

One of the most powerful examples of subtext in a movie scene that I can recall is from No Country for Old Men. It’s chilling to watch one man’s fate balance on the thin edge of a coin, and he doesn’t even understand the undercurrent of the moment. We, as viewers, are able to piece it together.

Clarice’s last desperate attempt to extract the killer’s name from Hannibal Lecter is filled with subtext in The Silence of The Lambs.

This fabulous example of subtext from the movie Sideways gives us a much deeper look at the character in a lovely and nuanced way.

Though bread is not an essential ingredient in subtext, I found three good examples involving the staff of life:

You might enjoy watching this short lecture on Hitchcock’s use of subtext in the movie Rear Window.

Perhaps the best-known example of subtext in film is this clip from Woody Allen’s Annie Hall. The use of subtitles works great for the movie, but our challenge is to subtly reveal our character’s thoughts and emotions without resorting to subtitles.

All of these examples are worth your time studying if you want to master what subtext is and how it works. I'd like to teach you now exactly how to apply such lessons.

Ernest Hemingway was brilliant at using subtext, especially in his short stories. Working as a journalist during his early years, he developed the habit of using brevity on the surface and letting the depth of meaning shine through from beneath.

His story “Hills Like White Elephants” is the quintessential example of how to use subtext in dialogue to convey the meaning of something important without ever stating it explicitly.

Reading his short stories is like a masterclass in subtextual technique. To get a better idea of what subtext is and how it can enhance your fiction, try reading some Hemingway stories, and start with “Hills Like White Elephants.”

First, you have to know who your characters are, what they want, and what’s at stake if they fail to achieve their goal.

Remember, subtext is below the surface, so sometimes it helps to write a practice draft stating what the characters really think, feel, and want. This is the surface level.

Next, it’s time to dig beneath the surface. Here are examples from some seven types of subtext, illustrating techniques you might use to deepen the significance of your scenes.

“
Subtext is the unspoken, sometimes hidden meaning beneath a character's words and actions. Learn seven simple techniques that will weave meaning into your story in this article.
Tweet this
Tweet

Take a look at the meet cute scene from Double Indemnity. It’s brimming with double entendre and innuendo, allowing plenty of opportunity for the viewer to participate in the scene.

You don’t have to create such clever banter in your scene, but using double meanings is a superb way to add subtext.

Louise avoids JD’s low-key inquiry into her evasion tactics and changes the subject at the end of this clip from Thelma and Louise.

Not wanting to get into the real reason why she goes out of her way to avoid the police, she thinks it's easier (and better) to change the subject.

Tension is added in this scene, too, because the viewer knows why Louise is avoiding this conversation—even if JD doesn't.

You can use your character's body language to express meaning beyond the spoken word.

In this scene from Frasier, there’s a lot of subtext happening. For this example I want you to notice what both Daphne and Niles are saying without words while she rubs cream on his burn.

Their reaction to Martin’s entrance confirms what we’re all thinking.

Watch this example from When Harry Met Sally. Which speaks louder—Sally’s words or action?

When you pair strong dialogue with contrasting action together, you're bound to stir the same emotions in your reader as you do in the characters.

5. Say it without saying it

A great example of this technique is from Crazy, Stupid Love. I especially like Steve Carell’s last line: “I don’t want you to blow up the house,” because what he’s really saying is he doesn’t want her to blow up their family.

Ingrid Bergman’s hiding a whole lot of subtext in this clip from Casablanca, and a lot of it is going toward masking her overwhelming emotions.

Just like people do in real life, showing how your characters try to cover up or pretend like they're not feeling something that they are feeling is a great way to include subtext.

Here’s a quick and humorous example from Tootsie where the viewer can interpret the meaning behind the cameraman’s question and get a kick out of it.

Add Subtext to Your Writer's Toolbox

Now that you’re more aware of subtext and know how to create it in your scenes, watch for opportunities to deepen the impact of your stories by using these techniques.

Remember the two situations when it really fits the bill—when the emotional stakes are too high for directness and when you want the reader to be an active participant in the scene.

Like all skills, writing subtext requires practice, so be sure to look for examples in the stories you read, as well as the movies and TV shows you view.

Use the writing tips from this article to help you develop subtext in your own work. It’s well worth your time and effort!

How about you? Do you enjoy reading a scene with subtext? Do you see how it makes you a participant in the story? Tell us about it in the comments.

First, write two or three paragraphs of a first draft—direct, without subtext. Use a work in progress or choose from the prompts below.

Next, dig beneath the surface by using one of the techniques discussed in the article to add subtext to your scene. Be clear in your own mind about what your character wants, but find subtle ways to express that desire in the scene.

Remember to engage the reader. Invite them to discover the secret undercurrent, the emotional truth of the scene.

Write for fifteen minutes. When you are finished, post your work in the comments and don’t forget to provide feedback for your fellow writers!