The Surprising Truth About Split Infinitives

by Liz Bureman and Alice Sudlow 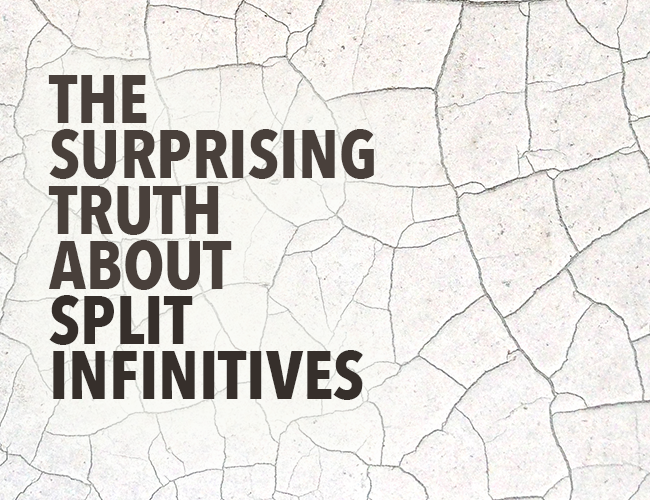 If that statement’s a shocking pronouncement, or if it makes no sense at all, never fear. Let’s take a step back and look at the long, illustrious history of split infinitives.

What is an infinitive?

First off: what’s an infinitive?

When you use a verb in a sentence, you conjugate it—that is, you change its form to match the subject and the tense. The infinitive, though, is the original form of the verb, before it’s changed to fit into a sentence.

The funny thing about the English language is that the full infinitive of a verb is always two words: it always includes the word “to.” Without the “to,” it’s called the bare infinitive.

And that’s where all this trouble starts . . .

What is a split infinitive?

“
A split infinitive happens when extra words appear between “to” and the bare infinitive of the verb.
Tweet this
Tweet

Want some examples? Try these:

I want to really understand what you’re saying.

She got a new alarm clock because she’s trying to not oversleep every morning.

Or this famous example:

To boldly go where no man has gone before. —Star Trek

Why shouldn’t you split infinitives?

There’s a long-standing, often-repeated rule in English that thou shalt not split infinitives. It’s generally taught in schools and many grammar nazis uphold it with unswerving fervor.

It’s a pretty archaic rule. Most scholars trace it back to the early 19th century, when modern English grammar was still being invented. Some guy named Henry Alford (who wrote the book The King’s English) decided that since you can’t split infinitives in Latin, you shouldn’t be splitting infinitives in English.

Here’s the thing: infinitives in Latin are just one word. It’s impossible to split a Latin infinitive because there’s nothing to split.

It may be an old, oft-cited rule—but it’s also pretty baseless.

When should you obey the rule?

Before we abandon the rule completely, let’s talk about the times when it’s helpful. There’s no need to throw the baby out with the bathwater.

Take a look at this example:

He’s going to nicely, sweetly, and unexpectedly ask her to the prom.

That’s four words between “to” and “ask.” By the time you get to “ask,” you’ve almost lost track of the sentence completely. Let’s move some words around:

He’s going to ask her to the prom nicely, sweetly, and unexpectedly.

Beware of cramming too many words into your infinitives. That can get clunky, messy, and confusing fast.

On the other hand, let’s take another look at our original examples. If we were to rephrase them, we’d lose some meaning:

I really want to understand what you’re saying.

She got a new alarm clock because she’s trying not to oversleep every morning.

“To not oversleep” puts firm emphasis on her action, which we lose with this arrangement. She’s trying to NOT OVERSLEEP, okay?! Stop giving her a hard time about her mornings!

To go boldly where no man has gone before.

This loses the elegant ring of “to boldly go.” Would “to go boldly” ever have become such a famous phrase? We’ll never know.

To split or to not split? Don’t worry

Splitting infinitives doesn’t generally hinder comprehension unless you’re trying to cram fifteen words in (don’t do that!). So split away!

Enjoy being able to slowly chew your dinner! Take time to really think of your fabulous story ideas! Make it your mission to boldly go where no man (or woman!) has gone before.

And if grammar nazis or English teachers give you trouble, feel free to confidently whip out your knowledge of the history of the English language and defend your split infinitives.

Do you feel passionately about split (or not-split) infinitives? Let us know in the comments.

Write about a group of puppies, kittens, ferrets, grasshoppers, or any animal of your choice. Use infinitives to set the scene, and split them as much as your heart desires (or don’t; this is your free writing time).

Write for fifteen minutes. When you’re done, share your practice in the comments, and be sure to leave feedback for your fellow writers! 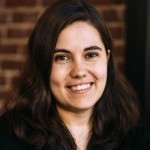