Boring First Page? Here’s How to Start a Story

Opening scenes are just hard. Figure out how to start a story right and you capture the reader, set the tone, and propel the story forward. Do it wrong, and you risk losing a reader. Here’s one opening to avoid: the empty stage setting. 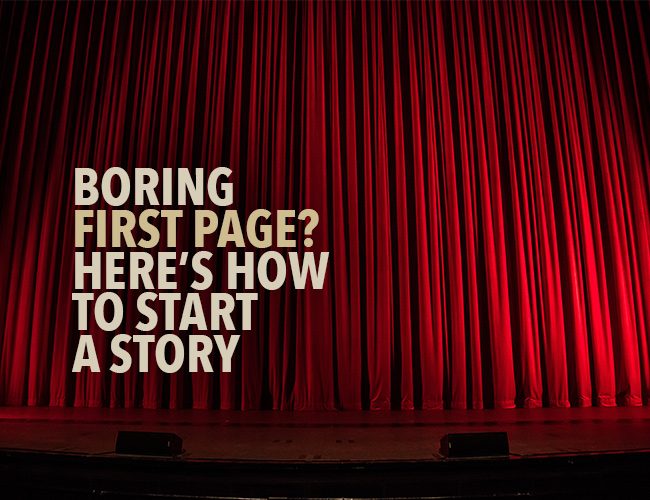 When my students and I work on story openings, we focus on presenting a character with a problem in an active setting.

Emerging writers tend to list the setting or character details or flat out state the problem. The effect feels like an empty stage where we drag out costumes, set flats, and various props before the story gets started. Like this:

John entered the room, his overcoat hanging from his hand. At six feet tall, he held an umbrella in the other hand. He looked out the window by the front door expectantly. He began to pace.

“She’s late again,” he said aloud to the wallpaper.

The Problem of an Empty Stage

This excerpt hints at the problem or conflict (she’s late, he’s waiting and pacing), but we know nothing else about him. The setting is a big blank space.

First, I pull in John with an overcoat. Then I add that he’s six feet tall: but why does that matter for this scene? It feels like a casting detail. Next I give him another prop with the umbrella. Then I paint a window next to a door before John starts walking.

It’s an unconnected list that doesn’t effectively get the story in motion.

Our goal is to immerse a reader in our world right away, not force them to sit and watch while we paint the set and dress the characters on an empty stage.

The Antidote to Empty Stage Openings

Two things can cure an empty stage opening: specificity and action. Look back at the initial excerpt and see if you can find four or five details that are too general.

Who’s John and what makes him tick? What room? What kind of overcoat and umbrella?

We don’t have to burden the scene with overly detailed descriptions of each of these things, but it helps to know which items have significance and need the reader’s attention.

Once I’ve selected the details that most need specificity, I need to get this character in motion. Having John pace can work, but how can I incorporate other action that reveals his personality and the things he cares about?

“
Struggling to hook your readers at the beginning of your story? Focus on specificity and character action.
Tweet this
Tweet

John’s crisply starched khakis swished as he paced the dingy motel room, stopping only to scan the parking lot outside for signs of Nadia’s blue Impala. A steady drip sounded from the bathroom.

“She’s late again,” he said, glancing at the red digital numbers beside the bed before stopping to stare out of the barred window.

The sun beat down on the tired asphalt outside, and John shifted his tan overcoat and oversized umbrella to one hand, letting their absurdity weigh on him. Nadia would laugh at him. If she ever arrived.

In this revision, we’re focusing on the contrast between John’s fastidious dress and manner against a dingy motel room and the person he’s waiting on. He’s uncomfortable, as indicated by his pacing, the barred windows, and the steady drip. When you use specific details to show us what the character notices, it reveals the character’s personality without having to resort to lists or stage directions.

Empty stage openings are easy to fix if you focus on specificity and action. See what sensory details you can add to your work in progress and create ways to put your character in motion.

What openings are least effective for you and why? What tips do you have for stronger story openings? Share in the comments.

Today, you have two options. Rewrite the opening excerpt about John, highlighting different details and action.

Or, look at your current work in progress. Evaluate the use of sensory details and action, then rewrite the first ten sentences.

Take fifteen minutes to write. When you’re done, share your opening lines in the comments below, and be sure to leave feedback for your fellow writers!