If there’s one significant thing that Joe and I have historically disagreed on, it’s the role of grammar in a writer’s toolbox. We complement each other well because as much as I love grammar and sentence structure, he equally embraces the dismissal of commas and the implementation of run-on sentences for art’s sake. When you get down to brass tacks though, I have to admit that he kind of has a point: grammar is somewhat arbitrary. 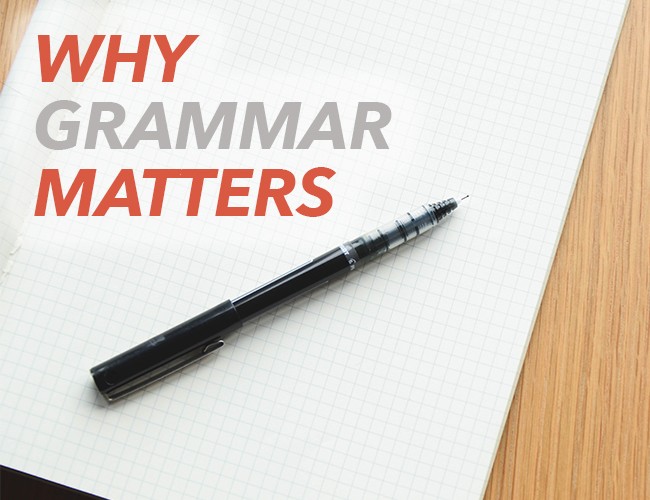 Do not read that last sentence as permission to stop using periods. What I mean is that grammar is a fluid construct, evolving as language and speech patterns evolve.

We don’t form our sentences the same way that Shakespeare and his contemporaries did. And truthfully, sometimes grammar doesn’t make any logical sense. Anyone who has learned English as a second language can speak to the absurdity that is pluralizing noose/goose/moose.

The Importance of Correct Grammar

So if the rhyme and reason of the English language is subject to the whims of the Kardashians’ sentence structure, why bother with grammar at all? Why not create all plurals by adding an “x” to the end of the word? Why not use commas instead of exclamation points? If language is constantly changing, why bother learning rules that are going to change too?

The reason that the rules of grammar exist is to give all speakers of the same language a playbook to make sure that they are understood by each other.

If you decided one day to stop pluralizing anything and just use the singular form for everything, that’s great for your personal journaling or expression. Most other English speakers will need some guidance as to how many cows are actually in that pasture you’re talking about—or are they in multiple pastures?

You can sprinkle periods wherever you want in a sentence, but readers are going to expect that thought you’re trying to express will have concluded when they reach that period. Making a dependent clause a sentence all by itself is avant-garde, but when your reader can’t figure out whether it’s supposed to modify the sentence before it or after it, you’ve got a problem.

Rules Are Rules for a Reason

Some might argue that rules are made to be broken. In the case of writing, bending some of the rules can be a form of expression. However, rules should not be broken for the sake of breaking them. You’re not going to keep the attention of an audience if they have to struggle to make sense of what you’ve written.

Rules can be annoying and inconsistent, but they provide guidelines for language comprehension that are universally applied to language speakers. If your writing is incoherent, your audience is left perplexed and sometimes won’t bother finishing your magnum opus.

What grammatical structure is your favorite? Which one do you find the most frustrating? Let us know in the comments!

We love messing with rules at the Write Practice. For the first ten minutes of your practice, write about a character interacting with a winter storm. This can be a rainstorm or snowstorm (since not everyone gets snow in the winter). Structure your sentences as though your 6th grade English teacher is over your shoulder and correcting your comma splices as you go.

Take the next five minutes of your practice and destroy everything you just wrote. Throw grammatical rules to the wind, but pick something to keep consistent. What are ways you can toy with the rules of grammar and still make yourself understood?

If you’re feeling brave, post your practice in the comments. Be sure to leave notes on your fellow writers’ practices too.