3 Reasons You Should Write Ghost Stories

From Joe: This article on ghost stories was originally published in 2012, and it was so popular I thought I'd share it again today for prompts week. I'm looking forward to seeing your spooky or scary story!

Ghost stories have a rich literary tradition, but for most of my life, I dismissed them. I don't believe in ghosts, and I've seen enough horror movies to know I'm not interested in seeing another. 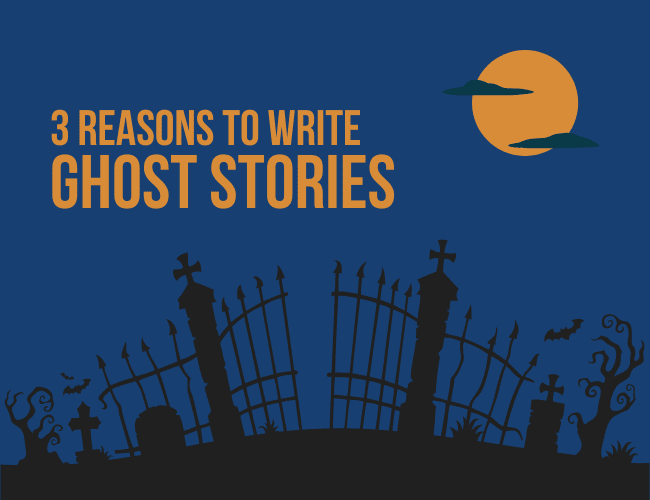 However, when I finished Denis Johnson's Train Dreams, a finalist for the Pulitzer, I was surprised to see a powerful account of a ghost.

Humanity Is Fascinated by Ghost Stories

It made me realize how many ghost stories are in the literary canon. There's Poe's The Raven, Dickens' A Christmas Carol, Henry James' The Turn of the Screw, basically all of Nicolai Gogol's work, and more recently Michael Cunningham's Specimen Days, among many many others.

Why should you write a ghost story of your own? Here are three reasons to write one:

While science is skeptical, the Bible doesn't seem to be afraid of ghosts. In 1 Samuel 28, King Saul consults a medium who brings the prophet Samuel back from the dead.

As you can imagine, Samuel's ghost wasn't too pleased about it, and he teaches Saul some healthy fear of the dead.

I think of spectacle as the kind of thing you would talk about around the campfire back in Homer's day. You would probably tell stories about things like war, adventure, the opposite sex, political intrigue, and, of course, ghosts.

Of course, the campfire is where most of the best stories from history came from. If you want to tell the kind of story that could be told around a campfire, a story about spectacle, write about ghosts.

One of the most popular themes in literature is death. Each of the thirteen stories nominated for the Booker Prize in 2011 were about death. Death is universal. The unfortunate truth is that if you're alive, you're going to die (if you're a zombie or a vampire, you get a break).

The problem is, no one knows exactly what happens when you die.

We all have our theories, but even our theories have holes and grey areas. (E.g. Will there really be pearly gates and streets of gold, or is that just a metaphor?)

Why We Love Stories About Ghosts

Ghost stories are about what happens after you die. However, the interesting thing about ghost stories is that while they remove mystery, they also heap a lot more mystery on.

Either way, they're a lot of fun!

Do you believe in ghosts? Have you ever written about them? Why or why not? Share in the comments.

Write about a ghost. It can be a scary ghost or an imaginary friend, a story about an entire ghost ship or a team of professional ghost hunters. Flex your creative writing muscles and see what kind of ghost you can create!

Write for fifteen minutes. When you're finished, post your practice in the practice box below. And if you post, please comment on a few pieces by other writers.