One Writer’s Story of Surviving the Syrian War

Last November, as the Syrian civil war intensified, we were approached by a young writer who lives in Syria. We're often approached by writers from all over the world, but there was something different about this aspiring writer: his message. 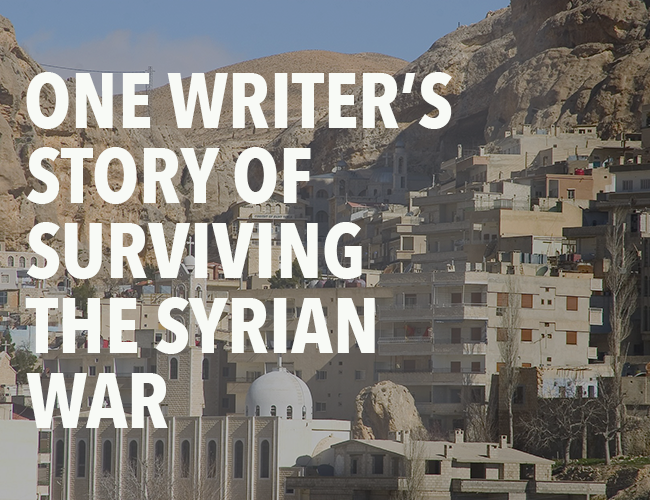 Nabeel Kallas is a medical doctor who writes novels in his spare time. He lives in the war-torn nation of Syria and writes about the people of his homeland. His first novel is called When the Jasmine Returns.
Nabeel has also recently started a fitness and nutrition blog, MasterMinding Perfection.

When the Jasmine Returns

When the Jasmine Returns is a story about young people living in Syria. It follows a group of friends trying to live normally despite their fears and the constant threat of the dangers of war. Despite the explosions and gunshots that have become the background music to their lives, they still dream, hope, and fall in love.

The book is not about where you are but rather who you are. The only thing standing in their way is the fight against death.

“
Look out for When the Jasmine Returns, a story of friendship and love in the midst of the Syrian war.
Tweet this
Tweet

When I first received the manuscript, I read the entire thing in one night. I couldn't put it down.

Every page I read broke me more and more. The casual way he wrote of a bombing. The normality of gunshots. He wrote of death as just another everyday occurrence.

As I read his book, I read his story. His life unfolded before me and I realized he was not a stranger. He's just like me: he’s funny, he loves deeply, he’s bad at cooking, he loves coffee, and he dreams of being a writer. What?

I see pieces of me in him, and him in me. Our stories intermingle from worlds apart.

We're excited to be able to help Nabeel as he publishes this story. Please read the excerpt below and let him know your thoughts in the comments. Also, sign up here to receive updates on the book.

Here is an excerpt of the soon-to-be-released novel When the Jasmine Returns:

I woke up after the shout I released. I was sweaty and confused.

“Damn it, why do these nightmares keep happening to me?”

I'm tired of all that. The war in my country has been on for many years now. Although I was from the five percent of the Syrian nation who hasn't lived a tragedy yet, this reality was strangling me every single day.

As a Syrian, when tragedy happens to you don't have fears anymore, because then, what you were afraid of will have happened. The problem is when the tragedy hasn't happened to you yet, and you witness the tragedies every day, you will start telling yourself each time “It's your turn now, you're next.”

After the nightmare I saw in that night, I woke up in the middle of the night. I went to the kitchen to drink some water. I got back to my room, grabbed my laptop and went to Ellentube. I have always considered watching Ellen's videos as a motivator and a booster for me when I felt down.

An hour passed and I was still not feeling that I got a sufficient dose, or as I like to call it my “Ellen fix.”

But I had an important day ahead of me and I needed my sleeping fix, too. So I closed my laptop and put it away. I then turned the light on. The nightmare thing wasn't something to be ignored. Especially since it was happening to me on a regular basis.

I sat down with myself and realized that what I was doing is not the right way of living! I can't live frightened from what might happen. Being worried is the worst thing you can do to yourself. It's the only misuse of your imagination.

I can't just continue like this! This way of living is consuming me each day. I determinedly decided to stop my worrying. To start fresh! Without any fears.

In my country, there is a saying that says: “When death comes, we will die.” The quote indicates to the importance of living in the moment—without the bad vibes. And when the bad things happen, we can deal with them.

I have had these thoughts before, but I haven't had the courage to apply them in my life until that night, when I remembered that the year that was about to start, was my graduation year, after which I would become a doctor who will need to specialize in another thriving country. This might be my last year in Syria. I can't spend it the way I was living—drowned in fear and worrying.

But will it run after me? Will it chase me wherever I go until it becomes my reality?

All I have to do is to start fresh.

Let Nabeel and us know what you think in the comments! Are you interested in reading more?

If you'd like to stay updated on Nabeel's book and be notified when it is released, sign up HERE.