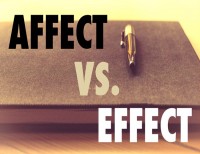 The grammar topic we'll review today is a pair of words that trip up many a writer. Maybe you've been affected by using the word effect incorrectly before too? What's the difference between affect vs. effect? 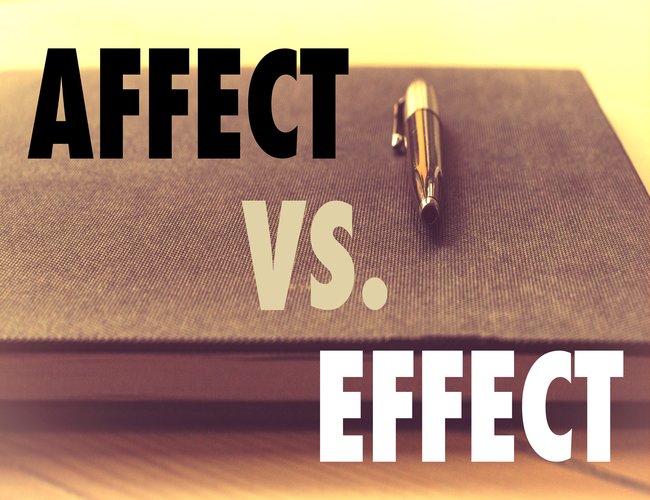 Let's see if we can clear up these often mixed-up words.

Definitions of affect vs. effect

Let's begin with some quick definitions for the most common forms of affect and effect. Then we'll look at some examples to help you keep the basic rules straight.

Affect is a verb meaning to cause change to something or someone. It can also mean to impact.

Effect is a noun meaning a change that is a result of action.

They are closely related, as both are often used to describe events around change. But the basic difference is this: affect is a verb and will show action, and effect is a noun showing a result.

Leroy was deeply affected by the acne medication's less-than-desirable effect on his face. He gingerly touched his cheek where the rash was the reddest.

The medication affected or acted on Leroy's face. Notice how “affected” is in its past-tense verb form with that -ed ending. The nasty effect is the result of the medication.

The primary rule of thumb when it comes to affect and effect is the following:

How to Decide Whether to Use Affect or Effect

Knowing the basic guideline that affect is a noun and effect is a verb will generally get you through most sentences that might cause confusion.

Ask yourself: Am I showing action or a result? If action, use affect. If a result, use effect. Try these:

Ask yourself: am I showing action or a result?

The loud noises affected the child's calm, and he left crying. (Affected means influenced, acted on.)

The music had a calming effect on the child. (Effect is the result of the music.)

The exceptions: when is effect used as a verb?

As is the case for most grammar rules, there are exceptions. The good news is that for affect and effect, they aren't common in most everyday use.

The one you might encounter is when effect is occasionally used as a verb, as a synonym for “to cause or bring about or achieve.” However, it's not as commonly used as the noun form and is still not interchangeable with “affect.”

He effected change at the office with a series of policy updates, causing many employees to quit.

In this sentence, he is achieving change, not merely influencing it.

One last difference in use: Affectation Versus Effect

For the most part, it's pretty simple. It can get complicated when you factor in the words that are derived from affect, like affectation. But even then, this shouldn't pose too much of a challenge.

Affect basically means to influence, as used in the example above, but it also means to put forth a misleading front. An affectation is the noun form of the second definition. For example:

Jason's affectation of confidence wasn't fooling anyone who saw his shaking hands.

Jason is presenting a false front of confidence, when in reality, his nerves are getting the best of him, as displayed by his jittery hands. Let's continue this story for a bit:

An unforeseen effect of his nerves was a sudden jump in the pitch of his voice.

An effect is a result of something. The effects of Jason's nervousness are shaky hands and a high-pitched voice. Keeping effect and affect straight can be a challenge, but the more familiar you become with these words, the less likely you are to find yourself staring at your published work and wishing you had a better command of grammar rules.

Do you have any tricks to help you remember the difference between affect and effect? Don't forget to share your thoughts and ideas in the comment section!

Tell the story of Jason's nervousness. Be sure to explain what is affecting him so deeply and describe the effects of his anxiety.

Write for fifteen minutes. Post your writing of Jason's misfortunes in the practice box below and make sure you leave feedback for your fellow writers.