Apotheosis: Definition and Examples for Writers

Many of the earliest forms of written literature that exist are religious texts, and most of us at some point in our schooling will study at least one type of ancient mythology, be it Greco-Roman, Egyptian, or Norse. I happened to be fascinated with all three at the age of ten. More than once in these stories do you run into a human mortal being raised to the status of a god. There is a name for this phenomenon, and it’s called apotheosis. 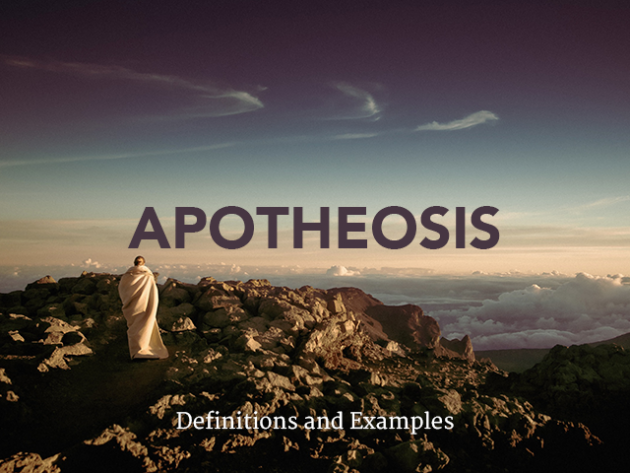 Apotheosis is when an individual is elevated to a godlike status, and Merriam-Webster defines it as “the perfect form or example of something.”

In theory, gods are determined to be the most perfect form of existence imaginable. Anyone who has read any Greek mythology can acknowledge that this is debatable, because the deities of Mount Olympus were just as morally flawed as the next person, but the general understanding of apotheosis remains.

Apotheosis can take the form of a literal deification, or it can be an abstract or metaphorical deification. For example, Hercules in the Disney version of the story spends the whole movie trying to regain his status as a literal god.

On the other side of that coin, the ancient Egyptian god Imhotep actually was a historical figure who served in the court of the pharaoh Djoser, and due to his historical reputation as a healer and wise man, became a god of wisdom and medicine about two thousand years later. Imhotep, while also falling under the blanket of literal apotheosis, is also an example of an abstract apotheosis: his reputation over time evolved to a point where he embodied wisdom and healing itself, and was deified as the manifestation of those abstractions.

How Writers Can Use Apotheosis

Apotheosis can be used as a character development tool to determine the qualities of a character.

Maybe the hero of the story has their core character traits defined by their persistence in acting as the personification of hope or love or humility.

Many villains get their start as embodying evil, and in many cases become the highest form of evil, which is the pinnacle of apotheosis.

Although your protagonist may not literally ascend to a higher plane, there is still the potential for them to undergo a metaphorical apotheosis by becoming the quintessential example of that particular abstraction.

Can you think of an example of apotheosis not mentioned here? Share in the comments!

Choose an abstract idea or concrete element and create a character who undergoes apotheosis for that idea or element. Write for fifteen minutes either about the moment of apotheosis, or establishing what exactly it is about that character that determines that they will undergo that apotheosis. Post your final product in the comments. Don’t forget to check out the work of your fellow writers!