3 Reasons Diaries Are Essential to Your Story

When I was in high school, a drama teacher that I had my sophomore year made everyone in my class keep a journal. He kept these diaries in his office, but never read them, and we would write every morning we had class. Some of us took the exercise more seriously than others (there was a minimum three line requirement), but after that year, he gave us the notebooks to keep. 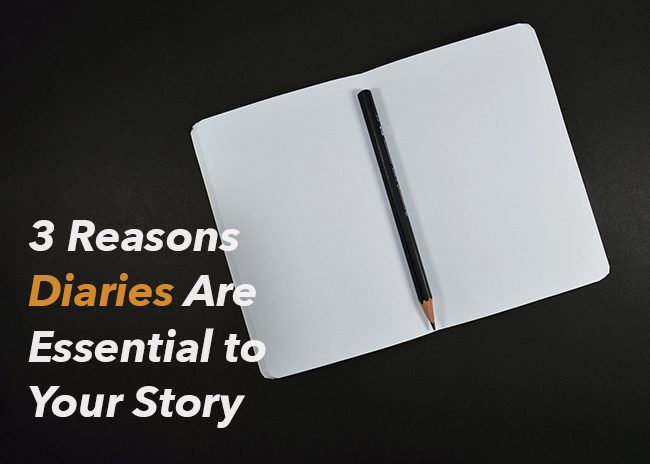 I had enjoyed journaling so much that I continued through my senior year and every summer that I worked at camp. When I was traveling the world, I kept a journal and filled it with stories, song lyrics that had meaning to me, a couple of creative writing exercises, and musings on each day’s events.

Writing in my journal was a great way for me to get my thoughts recorded, although it wasn’t the prettiest writing I’ve ever done, and I’m sure other people who were participants in the retold stories might remember events differently than my versions. But having those stories on paper has enabled me to have deeper insight into why it matters to actually write things down.

If you’re looking for an alternative way to tell a story, there are a couple reasons to try a diary or epistolary format.

When a work is written in the form of a diary, typically only one voice is heard in the telling. When this is the case, you as a writer have the opportunity to really dive into the psyche of your narrator, and develop him or her in a way that third person and even traditional first person narration can’t quite reach. Diary entries can go into deeper emotional territory, and can give the reader a more intensive look at how the narrator perceives the world around them.

If the work is more epistolary (written in the form of letters), there may be confessions written to the letter’s recipient that the narrator might prefer to keep closer to the vest in other storytelling formats. Additionally, letters can be exchanged between two characters, allowing readers to see more deeply into the minds of an additional character.

Since first person correspondence allows us insight into the head of only the narrator (with the exception of the two-writers example above), there is a chance that there will be plot points that the reader doesn’t learn about because the narrator chooses to omit them, or because the narrator doesn’t think them to be important at the time. This can present a golden opportunity to surprise or shock the reader with a later reveal, as is done in The Perks of Being a Wallflower and Gone Girl.

Care must be taken in developing the big reveal, though; you don’t want to lose your reader’s good will because all of a sudden everything they just read was a complete lie.

In general, when you’re writing a letter or a journal entry, much of the content is talking about things that happened, as in things in the past. Your characters are probably busy people, and they can’t write every day.

By skipping a few days between letters or entries, you as the writer can play with the order of the story timeline, and your character can start with the most recent events and work their way back to their last letter/entry, or maybe the narrator opens with a comment on how drastically things have changed, and then backs up to tell the story from the point of their last letter.

Writing with a diary or with letters as the story framework can be a good way to challenge yourself and explore different writing formats while continuing to move your story forward. Just be sure that the story structure continues to make sense, and the plot development moves logically in the context of the existing story.

Do you keep a diary or journal? Let us know in the comments.

Take fifteen minutes and write a diary entry or letter from the main character of your work in progress. Share your practice in the comments section and don’t forget to show love to your fellow writers.