First-person perspective is kind of like cheese: some people love it, some people hate it, and when it's poorly done, it grates.

Sorry for the pun.

I personally love first-person point of view, and it is my joy to share one simple, quick writing tip that can help your first-person perspective writing shine: cut the filter words. 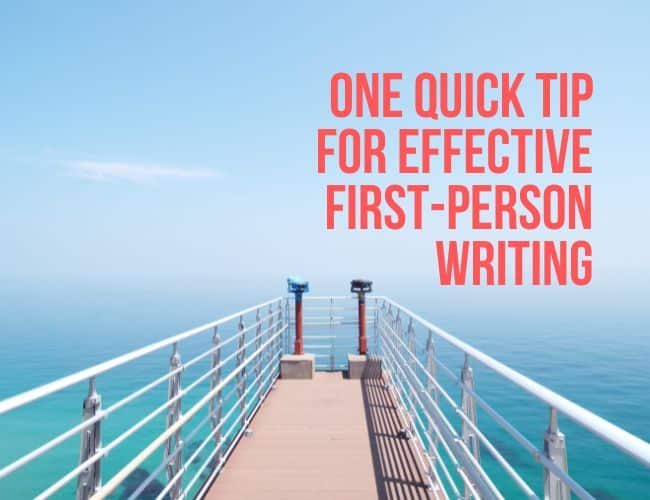 First of All, What Is Point of View?

What the heck is a filter word, you ask? Before I answer that, let's tackle some definitions for point of view.

Need help with point of view? To get a cheat sheet of the two most common POVs used in fiction, click here.

“Point of View” (POV) is the writer-ly term for the perspective through which you tell your story. It usually breaks down like this:

This means telling your story as “She did” and “He said,” never “I.” There are three kinds:

Very few effectively use second person narration (though now that I've said it, I'll bet several of you will jump to the challenge). Essentially, it's telling the story like talking to yourself. “You went to the fridge and slid the frosted drawer free, but to your amazement, it was full of beans. You had no idea what to do next. You expected avocados.”

This is usually reserved for instruction manuals and other non-fiction essays (like this one).

Some fiction writers can really pull this off (I'm looking at you, Choose Your Own Adventure series). I am not one of them. On we go.

First-person perspective is essentially told like a journal entry, a personal narrative, or a running commentary of thoughts. The reader is not watching the story unfold from the outside, but through this character's eyes. We see what they see and hear what they hear. If the character is wrong, we won't necessarily know, because their perspective is all we have to go on. There is no distance between the reader and the character's thoughts.

First-person point of view generally gets split up into two types:

So what makes first person perspective so wonderful in some cases and so terrible in others?

There are plenty of factors such as:

Now that you know the different types of point of view, let's move on to that one tip that can help you write better first person point of view. Here's the tip: eliminate filter words.

What Are Filter Words?

A filter word puts distance between the reader and your character, filtering that character's experience. Let's look at an example to get a better sense:

This was magic school? I stood and stared at it; I thought it seemed to be set up to depress us. I saw the green hill rising from the earth like some kind of cancer, and I could hear the voices of students on the wind, chanting soullessly, as if the wonder and awe of true magic had been whitewashed from their lives.

Not sure what to look for? Here it is with the filter words removed.

This was magic school? It seemed to be set up to depress us. The green hill rose from the earth like some kind of cancer, and the voices of students carried on the wind, chanting soullessly, as if the wonder and awe of true magic had been whitewashed from their lives.

What did I remove? I thought, I saw, I could hear. In other words, I removed anything that had you, the reader, looking at her looking at things, rather than looking at the things she saw.

How to Spot Your Filter Words, with Examples

I'm going to give you one more example from my own work. Here it is with filter words added:

I watched the box blow apart, double-thick cardboard smacking to the counter. Inside, I saw a tiny, perfect, snow-white dragon.

A dragon. On my kitchen counter. I heard it squeak at me, which I thought could mean absolutely anything, and I watched as it began to preen itself like a cat.

I saw mother-of-pearl scales gleaming all over its ridiculously long, thin neck. I stared at the wee round-bellied body, resting on tiny curved legs and a tail long enough to balance that neck. I noticed its head was a drawn-out diamond, long and narrow, and its snout was so thin that the flare of its nostrils only emphasized the entire disproportionate cuteness of the whole package.

And with filter words removed:

A dragon. On my kitchen counter. It squeaked at me, which could mean absolutely anything, and began to preen itself like a cat.

Mother-of-pearl scales gleamed all over its ridiculously long, thin neck. The wee round-bellied body rested on tiny curved legs and a tail long enough to balance that neck. Its head was a drawn-out diamond, long and narrow, and its snout was so thin that the flare of its nostrils only emphasized the entire disproportionate cuteness of the whole package.

The second example gives you Kate's point of view through her eyes and ears. The first one forces you to watch her seeing and hearing—and takes us away from her experience.

Are Filter Words Ever Okay?

Because I love ya, I will state that there are plenty of valid exceptions. There will be times that your first-person perspective uses those filter words to great effect.

For example, “I see the shelves, and I see the counter, but I don't see the scissors,” expresses your character's frustration, which is more important than the counter and shelves he's seeing. It's a matter of emphasis and where you want the reader's thoughts to go.

Filter words can be stylistic, largely tied to voice. I have one character from the deep south, for example, who tends to use them as part of his storytelling: “And then I look over there, and what do I see but that damn fool, makin' off with my breakfast.”

There will always be times to use filter words, but it's crucial that you only use them when you're aware of it, not by accident. If you're ever in doubt, just ask yourself this question: where do you want your reader's eyes to be?

Need help with point of view? To get a cheatsheet of the two most common POVs used in fiction, click here.

How about you? Which point of view do you write in most? Let us know in the comments.

It's time to take what you've learned about filter words and first-person perspective and apply them to your writing.

Write for ten minutes in first person, using as many filter words as you can. (Need a prompt? Here's one: “I see the shelves, and I see the counter, but I don't see the scissors.”)

Then, for the next five minutes, remove all the filter words.

Share your two versions in the practice box. And don't forget to leave feedback for three other writers!