3 Devious Steps to Write an Antagonist You Hate

Today's guest post is by Reagan Colbert. Reagan is a Christian Fiction writer who also has a passion for poetry and songwriting. She lives for powerful words, proper grammar, and anything inspirational. She blogs at www.fiction4hisglory.com. She recently published her first book, The Hidden Soul, on Kindle.

As writers, we're supposed to be the characters. Not just write about them—be them. Become them. Breathe life into them. Take their side and win their argument, even when we don't agree with what they're fighting for.

In any good book there is conflict. Often, that conflict is between the characters. No matter how many characters you create, it all boils down to two: The Protagonist and the Antagonist. The stars of the show. 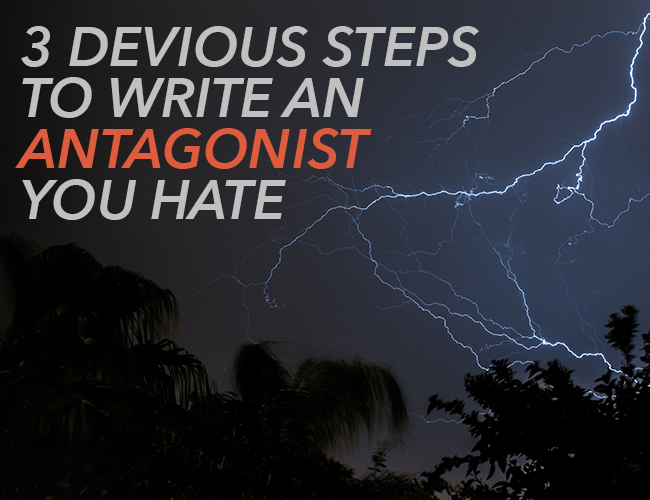 We write a lot about the protagonist, the one who really is the “star.” But I've noticed that not as much attention is devoted to the antagonist. In my own writing, I find it much more difficult to write about him than the protagonist. At times, I find it nearly impossible to relate to him and his beliefs, to be able to step into his shoes as I do with every other character.

But instead of running from this struggle, it's time to face it.

Let's talk about the antagonist.

Who Is the Antagonist?

In a word, he's the anti-protagonist. Your main character has enough to worry about (if you've done it right) without someone getting in the way of what he's trying to accomplish. Enter Antagonist: the one whose job is to “antagonize” your main character in any way possible, whether he is deliberately trying to destroy him or is simply in the way.

Sometimes he is responsible for antagonizing the main character by merely existing.

Whatever his motives are (and if he's developed correctly, he has to have some kind of motive, however strange it may seem), he is in conflict with the protagonist, and is stopping him from accomplishing his goals.

How to Create Your Antagonist

We have to put as much effort, if not more, into creating the “enemy” as we do creating the main character. In order to do that, we have to break it down:

A quote by John Rogers reads:

You don't really understand an antagonist until you understand why he's a protagonist in his own version of the world.

The antagonist is just as passionate for his side as the protagonist, is every bit as confident in his beliefs, and views your protagonist as his antagonist. He has a reason for that, and you need to find that reason.

He needs to be well-developed, and needs to have enough “screen time” to create conflict. The readers need to know a lot before they decide if they love or hate him.

This is where my brakes screech. In all of my books (those published and those not), the protagonist is me. Whether it's a Roman soldier escaping the legions or a paralyzed twenty-two-year-old in modern times, there is always something about them that reflects back to me. I always have no trouble identifying with them.

And now I'm supposed to identify with him?

Identifying with a character is so much more complicated then it might at first seem. You not only have to write about them—you have to become them, step into their shoes, and take their side.

My book has a message, and it has an argument. My protagonist is on my side, and my antagonist is against us. He says and does things that, if done in real life, would make my blood boil. And since I live and breathe my books, it did, even as I wrote it. I hated what he did, and I wanted to do anything but write about him.

Then I realized something.

It's not only good—it's exactly what I'm going for. Because if I hate him, then my readers will too. If he makes me angry (and I'm the one who wrote it!), then he'll definitely make my readers feel the same.

So I do just that. I step into his shoes. I make his argument. I believe what he believes, understand why he does what he does. And for the briefest moment in time, I agree with him, just so I can see what it's like.

When you identify with your antagonist, you're not going against your beliefs. You're actually validating them. You're not turning your back on your message by identifying with the antagonist; you're using him to prove your point. Because that small experience of siding with the “enemy” will be so worth it when you can turn around and devote a scene, paragraph, chapter, or even the entire book to proving him wrong.

That is a special kind of satisfaction only a writer could experience, because only a writer can so passionately act out every character in a story, side with some, hate others, and fight, in a sense, with themselves.

In order to identify with the unidentifiable, no matter who that may be in your story, you have to go undercover and figure out just why every character—good and bad—is the “protagonist of their own story.” Then, slip into actor mode, and bring those characters to life on the screen of your book.

And take the readers along for the ride.

For fifteen minutes, become the antagonist: think of the antagonist from your current work in progress and write a scene from their perspective. As you write, step into their shoes and try to figure out why they are their own protagonist.

When you’re finished, share your practice in the comments. And if you share, remember to leave feedback for your fellow writers!