How Are You? Good vs. Well

When someone asks, “How are you?” should you say you are good? Or that you are well?

Today let's look at the difference between these two words, good vs. well, to better understand when and how to use each correctly. 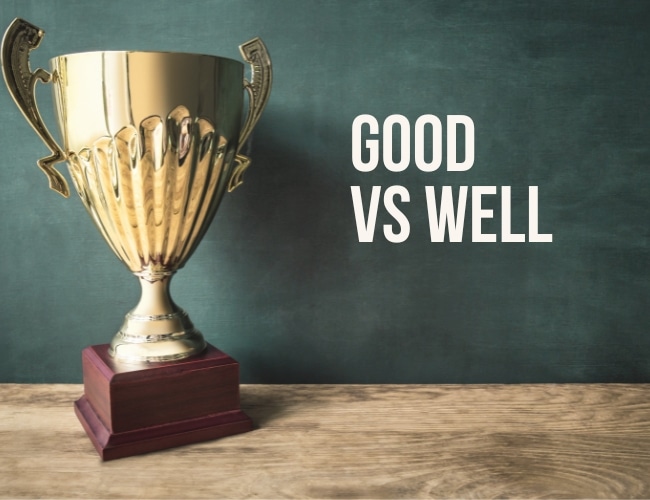 Quick visualization exercise: Think back to a time when you did something fantastic. Maybe you won a sixth-grade spelling bee; maybe you were part of a national-championship rugby team; or perhaps you were part of a group that set the world record for largest group “Thriller” dance.

Whatever your achievement was, I'm sure someone told you that you were fantastic. They showered you with all kinds of praise telling you that you did good.

When Someone Asks How You Are, It's Okay To Say “Good”

First and foremost, let me give you permission to respond to “how are you” with “good.” Go ahead.

Replying “good” is grammatically correct if you're not directly referring to your health.

Responding with “well” means that you aren't sick. “Good,” on the other hand, suggests you're in good cheer.

When “Good” Is Not Good

However, using “good” in conjunction with an action verb is wrong. Always.

“Good” is an adjective. Adjectives modify (or give more information about) nouns and pronouns. So we use “good” when describing nouns (“Good puppy!”).

You did not write good, play good, or dance good. You did all those things well.

You can be good. You can do good, but only in the sense that you are doing charitable acts.

But you can't do good at math. You do well at math.

Good vs. Well: They Are Not Interchangeable

While it's okay to use good when someone asks how you are, that doesn't mean good and well are interchangeable.

Now, may you never confuse the two again!

Need more grammar help? Once you master good vs. well in the practice below, check out my favorite tool that helps find grammar problems and even generates “good” reports to help me write “well”: ProWritingAid. Works with Word, Scrivener, Google Docs, and web browsers. Also, be sure to use my coupon code to get 250 percent off: WritePractice20

Coupon Code:WritePractice20 »
How about you? Which do you respond with when someone asks how you are, good or well? Let me know in the comments.

Write a scene between little Suzy and her mother right after Suzy did something fantastic (won the spelling bee, dominated at the national rugby tournament, or played a great zombie in the “Thriller” flash mob, perhaps?).

Particularly focus on the dialogue between Suzy and her mother about how good Suzy's performance was, how well she spelled/tackled/”thrilled.” Make sure you use “good” and “well” correctly.

If you are already a Write Practice Pro member, post your practice here in the Practice Workshop for feedback. Be sure to give feedback to a few other writers and encourage each other.

Not a Pro member yet? You can join us here as a Write Practice Pro monthly subscriber and see what a difference a professional writing community can make as you pursue your writing goals!