How to Begin a Story: 3 Quick Ways to Improve Beginnings and Endings

My family moves a lot. Beginnings are often stressful, disorienting things, while endings might be joyous, grief-filled, and everything in between. Funny how stories are like that too. It's often so difficult to know how to begin a story or how to tie it up at the end. Why are beginnings and endings so hard to do well in writing and life? 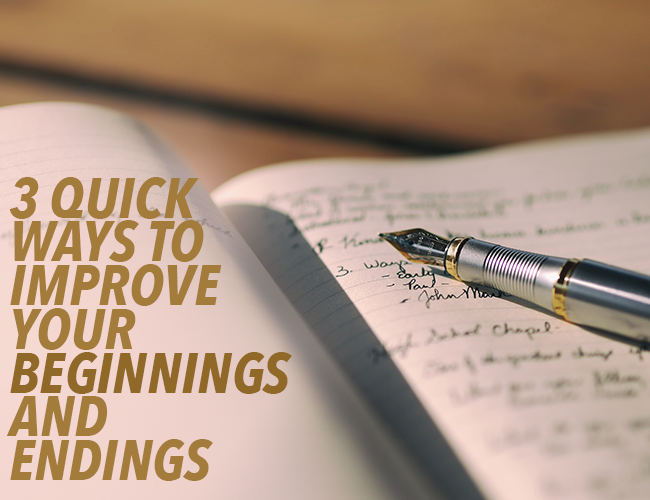 Here are three tips to improve your beginnings and endings.

Emerging writers often begin stories by introducing the main character through a laundry list of his or her attributes, beliefs, and fears.

John is thirty-five and wears a trenchcoat even in summer. His wavy brown hair and green eyes came from his mother, but his habit of pulling his right ear came from his father. His wife left him three years ago, and he’s been living alone since, afraid to be hurt again.

What’s wrong with a sketch?

It’s boring and a little weird. Characters who begin by explaining everything about themselves are usually not to be trusted. Also, as you read that sketch, did you imagine him standing still on a blank stage or canvas, as I painted details on him? It’s classic telling instead of showing. As a reader, I’m already asking John, “So what?”

When we meet new people, we come in contact with living stories. Some are exciting, others are sad, some are triumphant, and most are a mixture of different kinds of stories. No one shakes our hand and launches into a full body sketch and family history (no one you want to talk to for long anyway).

Some things might be obvious right away from clothing or the way a person carries himself, but most things are revealed over time in how a person (or in our case a character) acts in sticky situations.

How to begin a story: Salinger’s non-sketch opening

A great example of a novel that subverts this kind of opening is Salinger’s The Catcher in the Rye.

Why does Salinger’s opening work?

He sets up the voice and stakes. This character is going to upend what we believe about coming-of-age stories, and he sets it up in this one rambling sentence in Holden Caulfield’s distinctive voice.

Tip 2: Eliminate waking-up or dream scenes at the beginning or end

(I know, some of you are already sharpening your pitchforks on this one, so I’ll say it up front: of course, a wake-up or dream scene can be done well, but they must be done on purpose for a specific reason to be effective.)

About 75% of the first stories I receive from young writers will include one of these two things: They begin with light streaming through the window as the character gets out of bed. Or, the story will end: “And then I woke up.”

Most of their stories are stronger the moment they scratch out the entire first scene or redline the words “And then I woke up.”

Why we don’t want to wake up

Ending a story with “And then I woke up” thwarts reader expectations (and not in a good way). It is a cheap twist or surprise.

When I discuss this ending with my student writers, they tell me they wanted to take the character back to the “real world.” Why? Why can’t the character live and operate in the world of the story? The Lord of the Rings doesn’t end with “And then I woke up” and neither should most stories.

If a character makes choices and acts in bold ways during the story to create a character arc, ending with “it was a dream” robs the character of his change. He ends essentially the same person he was at the beginning.

What about waking up at the beginning?

The second I start reading a story that begins, “Light streamed through the window and she opened her eyes. She padded to the bathroom and stared at her reflection in the mirror …” I’m skimming down to find out where the action begins. Does the reader really need to see this character wake up to understand her, what she wants, and what will keep her from getting it? Most times, the answer is no.

If we are using sleep as a disorienting factor in our openings, such as when a loud banging wakes a character from sleep, that might work well depending on the genre, but ask yourself if it is overused. Sometimes I find myself using wake-up scenes because it’s easier, and that is definitely not a good reason.

But DuMaurier used a wake-up scene

Of course recounting dreams can work in an opening, but they have to be used in interesting ways on purpose, not because I couldn’t think of a better place to start. In fact, one of my favorite novels, Rebecca by Daphne DuMaurier, begins with a dream:

Last night I dreamt I went to Manderley again. It seemed to me I stood by the iron gate leading to the drive, and for a while I could not enter, for the way was barred to me. There was a padlock and chain upon the gate. I called in my dream to the lodge-keeper, and had no answer, and peering closer through the rusted spokes of the gate I saw that the lodge was uninhabited.

How can I use a dream like DuMaurier did?

Think about how this scene works in relationship to the rest of the novel. First, it sets the scene and introduces the character. The description of the deserted grounds at Manderley foreshadows the end. The nameless narrator has survived a harrowing nightmare of an experience, and she will recount those events in the course of the novel.

But consider this: she also “wakes up” to realize she is stronger than she imagined. She no longer lives under the belief that she is a weak, poor substitute for her husband’s first wife.

If I’m going to use a dream or vision at the beginning of my story, I want to make sure that it is where the story really begins and that the reader understands why my character would change her life’s course because of a dream.

If I can’t wake up, where do I start a story?

Better advice for how to begin a story? Begin the story as late as possible including only the first scene that builds, foreshadows, or impacts the climax. A great opening needs to do orient us to the character and world, and keep us reading. Study first pages in your genre. How do they begin?

“
Begin your story as late as possible, at the first scene that builds, foreshadows, or impacts the climax.
Tweet this
Tweet

Tip 3: Eliminate any saviors or deus ex machina at the end

Here's one final tip that can save your ending (but not your character). In one of my courses last spring, we had a children’s book author come to discuss his book and process. After the author finished reading his book, one of my more skeptical writers asked, “But does he really act to solve his problem? Is that really strong action?” (So proud!)

His question echoed the questions I always ask my writers about their endings: How does the character act to solve his own problem? Does anyone save him? Does nature or fate or some god swoop in to fix the problem? If so, the story might be in trouble.

We love our main characters. We don’t want them to go through anything difficult, but strong action makes for strong characters, even when they fail.

One way we inadvertently save our characters (and weaken them) is by using a “deus ex machina” (god from the machine—any sudden abilities, saviors, or circumstances that save the character from acting). If our character suddenly remembers his judo from 4th grade (and we’ve not seen it during the course of the story), then we’re undermining our ending. If the antagonist trips and falls into a hole and disappears in the climax scene, saving the protagonist from a fight, we’re weakening our character.

Don’t let anything or anyone steal the climactic choices from your character. Make him act to get what he wants.

Beginnings and endings are connected

The next time you finish a novel’s final chapter, flip to the front and reread the first chapter. How are they connected? Are seeds of the ending planted (even subtly) in the opening? How does the ending reflect or resist the first scene? How is the character different in those two scenes?

If your research uncovers some books that begin or end in the ways listed above (and it will!), ask why. Is that really where the story begins or effectively ends? Is that scene critical to understanding the character, conflict, and resolution coming?

As you revise your beginnings and endings, I hope these tips and questions will help you avoid some common pitfalls.

What are your favorite beginnings and endings? Do you have any other tips for how to begin a story or end it well? Share in the comments.

Take fifteen minutes to research openings in your genre. Read the first page of five to seven successful books (you can also do this with television shows or films). How do they open? Share a couple titles and a quick sentence summary of what you found in the comments below. (My students always find the wake-up scene that begins The Hunger Games.) If you find any that open with wake-ups, sketches, or dreams, see if you can analyze or break down why it works (or explain why it doesn't!).

Take fifteen minutes to write or revise an opening for your own work in progress. Remember, openings introduce a character in his or her world in a way that makes us want to keep reading. (Don't worry if it doesn't come out the way you would like the first time. Most writers rewrite their openings several times!) Share your opening paragraph or sentence in the comments.