Ever wondered how to write a book like Stephen King? He’s called the King for a reason, and it’s not just his last name. Stephen King has written in just about every genre imaginable, has sold over 350 million copies of his books, and has had work adapted to movies, miniseries, and comics. 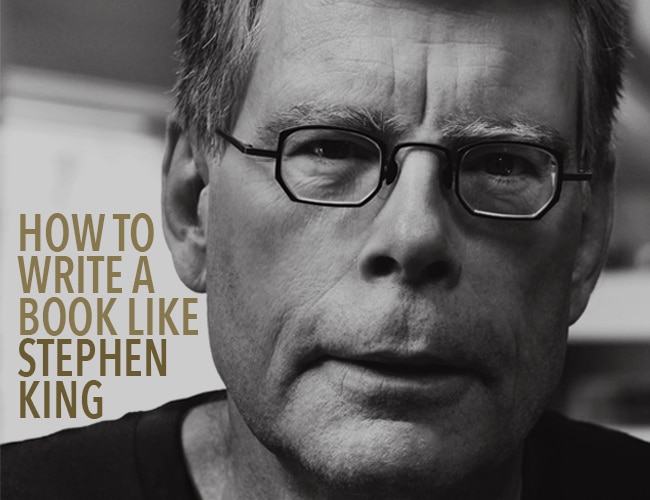 Whether you’ve read him or not, you know who he is and I would be amazed if you haven’t experienced his work in some form or another.

I’m not going to pretend I could ever write as well or as prolifically as King. King is King. There is no substitute.

What I do know is that King’s books have taught me more about writing than any other author’s work. I even mimicked him for a while in my own writing. (My muse has since decided that wasn’t the best course for me and has gone off in a different direction.)

I’m going to take you through what I’ve learned from King after years of reading his fiction and poring over On Writing like it held the key to the universe’s mysteries. (If you’re a writer and haven’t read On Writing yet, you need to go get it. Now.)

Read on for tips on how to write a book like Stephen King.

King has been active for over fifty years, and he’s given a lot (and I mean a lot) of writing advice in that time. Google it and you’ll find a million hits with lists of his quotes and thoughts on the subject. I’ve chosen a few that he mentions time and time again and that I’ve applied to my own writing.

Seems basic, but I’ve met quite a few new writers who don’t read. How can you know how to write if you don’t read? That’s like saying you can build a skyscraper without having ever looked at building plans before.

King reads instead of watching TV. Personally, I don’t shun the television entirely, as I think something can be gained from studying shows and movies for their story just like you would any other story form.

I do agree with his sentiment, though. Cut back on the TV and pick up a book.

(Incidentally, most rich people read extensively. Just putting that out there.)

“
If you want to be a writer, you must do two things above all others: read a lot and write a lot. —Stephen King
Tweet this
Tweet

We’ve all heard this advice a million times, even from our fearless leader here at The Write Practice, Joe Bunting. It’s tiring to hear, but it’s right.

Writing is like a muscle: use it or lose it. It’s that simple.

King writes daily and puts out a phenomenal word count when doing so. Just write, whether you want to or not, whether you have the time or not.

Not because you don’t know bigger words, but because you don’t need to show off. Your reader is your friend and you need to treat them as such. Don't talk down to them. No one wants that and they’ll put your book down quickly if they feel that way.

4. Write for one person

You can’t please all readers all the time. Write with one person in mind, your Ideal Reader, the person you most want to impress with your writing.

For King, it’s his wife. For me, it depends on what the story is about. Sometimes it’s my sister or mom, but mostly it’s my husband.

Obviously, King has deadlines to meet and money to make. But that’s not why he writes. He writes because he loves writing, not because he’s focused on a paycheck. Pure and simple.

(Although I imagine his paycheck doesn’t hurt.)

As a (predominantly) horror writer, I’ve been studying King for years. Here are a few things I’ve gleaned from his work that he hasn’t necessarily explicitly said in one of his juicy writing quotes:

King might write predominately horror, but the bumps in the night aren’t what keep us coming back to his books. It’s his characters.

He doesn’t start a story with something jumping out immediately. He starts it by following his characters, showing you their everyday lives, making you care about them. Then he scares the bejesus out of them (and you).

The caring is why you’re staying up until 3 a.m. to finish the story.

Put your characters in a situation and make them work to get out. Watch them. Follow them down whatever dark holes they choose. They’re in charge, not you.

This can be frustrating at times, but once you get the hang of it, it’s freeing and exhilarating. (And my preferred way to write.)

3. Sprinkle in that foreshadowing

While King is making you care about the characters, he’s also hinting at what’s coming. The character gets nothing more than a sense of unease (if that), but all that foreshadowing builds up the suspense.

When the baddie finally shows up, you’re ready, it makes sense, and it’s that much creepier.

The thing that makes King so great is the depth of his characters. He makes you care about them, but not because of things that happened to them twenty years ago. He places backstory, but it’s sprinkled throughout and doesn’t include every bit of life story they have.

Focus on the here and now. If you have to provide backstory for something to make sense, do so. If it’s not necessary and is just filler, leave it out.

Incidentally, this is a rule for all storytelling. Nix it if it’s not relevant.

“
Is backstory absolutely necessary for the reader to understand your story? If not, cut it out.
Tweet this
Tweet

5. Creepy isn’t necessarily something jumping out of the closet

For those horror writers out there, you don’t have to go with gore to get your reader creeped out. The best way to tickle readers’ fear bones is to concentrate on the unknown. Hint at what the monster looks like, or don’t have the characters ever see it at all!

What people can't see or understand is what scares them the most. Use that base fear.

Not into King’s style? That’s fine. Read him anyway.

You obviously don’t have to pick up every book he’s ever written, but I encourage you to read something of his.

(If you really don’t like him, I would recommend giving The Mist a read. It’s a short story but showcases all of the trademark King methods of character development and creepiness. And it’s not very gory for those of you with queasy stomachs.)

As a writer, part of your job is to study other writers. The successful ones and the not so successful. King is someone you should study. Even if you don’t write in the same genres he does, studying his stories can help you write a book like Stephen King.

What’s your favorite piece of writing advice from Stephen King? Let me know in the comments!

King starts off The Mist with a downed tree and a faraway fog. The characters are simply going about their daily lives and this ominous background is just that: background.

Today you’re going to take fifteen minutes to write the beginning of a story. I want you to concentrate on character development above all else. Choose a character and an inciting incident, then let your character lead you.

When you’re done, share your writing in the comments. Don’t forget to comment on your fellow writers’ work!