Inter vs. Intra: A Simple Trick to Remember the Difference

Writers often mix up the prefixes inter- and intra- as they seem to have similar meanings, but today, I want to teach you a simple trick to keep them straight. 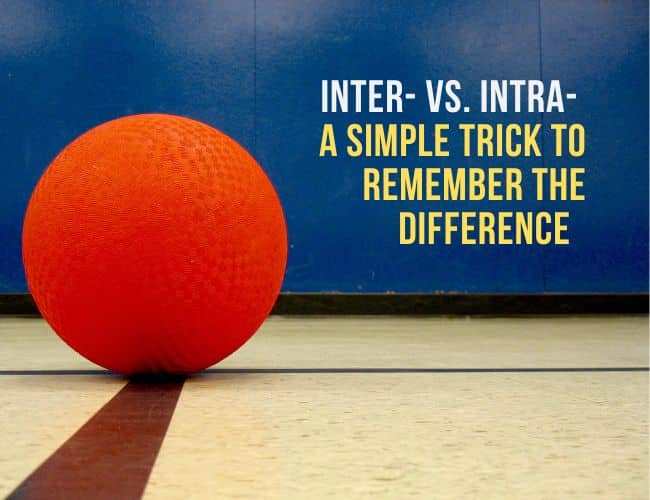 I play kickball on a league in Denver, and if you haven't tried playing this playground game as a grown person, I highly recommend it. We're trying something different for the fall season and playing cup-in-hand, which, for those who are not familiar, is kickball with a solo cup of beer in your hand at all times. It makes catching balls much more challenging.

I was talking about my team with someone this past weekend, and they asked, “Oh, it's like intramural kickball?” I said yes, although it is weird to hear someone use the word intramural outside of college.

Also, it's definitely intramural, not intermural. But what's the difference?

Both inter- and intra- are common prefixes, meaning they are added to root words to add to or change the meaning of a word. (Note: that's also why when written alone, they have the hyphen next to them, to indicate that they aren't a word in and of themselves.)

The prefix intra- means “within,” and specifically within one thing.

The prefix inter- means “between” or “among,” specifically between two or more things.

Examples of Inter- and Intra-

The word intramural literally means “within walls” and refers to things that occur within the walls of a school, or things that are self-contained.

Interstates maintain the same highway number across the country because they are connecting the states. If you made reference to an intrastate highway, that road would go by a name or number that only residents of that state would be familiar with.

The word international refers to something that happens between countries; international travel is when you move from one country to another.

What's the Difference Between Inter- vs. Intra-?

So how do you keep them straight?

“Intra-” is always within one thing/ person/ organization.

“Inter-” is always between two or more things/ people/ organizations.

One example that might help is internet versus intranet.

The internet, as I think we're all aware, covers the globe, and anyone with a connection can access it from anywhere in the world.

An intranet, on the other hand, is only accessible to a certain group of people, usually from the same company.

My office has an intranet where we can access the company newsletter and place lunch orders for each Friday, but most of our daily work takes place on the internet.

It can be tough to distinguish the two prefixes, especially when saying them out loud gets confusing, but remembering whether the word is referring to something self-contained or something bridging gaps can help sort through that spelling dilemma.

Still confused about intra vs. inter and want more grammar help? My favorite tool that helps find grammar problems and even generates reports to help improve my writing is ProWritingAid. Works with Word, Scrivener, Google Docs, and web browsers. Also, be sure to use my coupon code to get 20 percent off: WritePractice20

Did you play intramural sports in college? Which ones? Share in the comments.

Here's your prompt: Your character has a crush. They met playing intramural kickball, but now it's summer, and the crush is traveling internationally so most of their interactions happen over the internet.

Write about your character and their crush for fifteen minutes, using inter- and intra- correctly. When your time is up, post your practice in the writing box below. And if you post, be sure to give feedback on a few practices by other writers.