How to Learn to Write by Reading

A pop-up bookstore opened up next to my job, full of used books. One antsy afternoon, I took a stroll around the store looking for anything on my “to-read” Goodreads list.

That’s when I found it: Francine Prose’s Reading Like a Writer: A Guide for People Who Love Books and for Those Who Want to Write Them. This helpful book shares how we can learn to write better by reading intentionally. 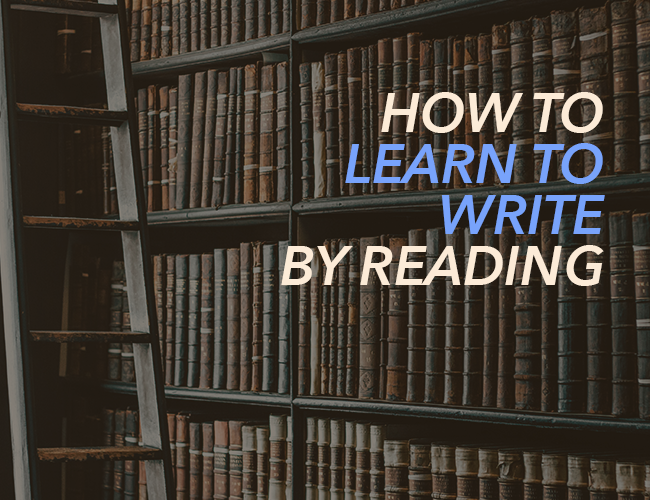 I haven’t finished the book yet, but I’m already inspired and am dying to share what I’ve learned so far.

Read to Learn How to Write

No, really. Read to learn how to write.

Yes, a writer should read, out of principle. But Prose (that has to be a fake name, right?!) tells us we can actually learn how to write by reading. That's how people figured it out before workshops or writing conferences were available: by studying the craft of their predecessors.

One reason Prose likes this technique, compared to writing classes or workshops, for example, is that it focuses on writing done well rather than on everything you did wrong.

It seems so obvious, but this basic premise alone (to learn to write from reading) had an impact on me. It made me want to devour all the books on my list and engage in this purposeful reading.  It was exciting!

If you’re going to learn by reading, you’ll need to read closely. If you're excited about reading like me, you may be tempted to speed up.

Don’t do that. Don't speed up. Rather, slow down. Read every word. After all, Prose reminds us, words are the “raw material” from which literature is crafted. At the end of the day, good writing depends on a writer’s a skill in choosing one word instead of another.

Next time you read, ask yourself, what sort of information does each word choice convey? And more importantly, read the words that are written!

There are some writers that endure the test of time. I’m sure a few (probably the ones you like the most) immediately come to mind. Read these greats again and ask yourself, why did they endure?

When you’re done, Prose suggests, keep these greats close to where you write. I really like this advice. By keeping the greats close at hand, you have at your fingertips a resource of sentences written by writers who have worked “to revise and polish them into gems.”

Prose suggests turning to these brilliant sentences when you feel like your writing is getting lazy or vague: “you can open such books anywhere and read a sentence that will move you to labor longer, try harder . . . until it’s something to be proud of instead of something you hope that the reader won’t notice.”

Reading Is the Best Way to Learn to Write

We know that as writers, it's important for us to read. But reading intentionally can help you discover the specific techniques and tricks your favorite authors use so that you can learn more and apply that knowledge immediately.

Pick up a great book and read!

Which writing greats will you keep close? Let me know in the comments.

Francine Prose dissects paragraphs from literature throughout Reading Like a Writer. Now it’s your turn!

For the next fifteen minutes, closely read the paragraphs below from Alice Munro’s “Dulse.” What choices did Munro make? What do we know about her heroine? How does she convey this information? Share your observations in the comments.

Below, I’ve shared some of Prose’s notes on this excerpt, which you can read after you complete the practice. 😉

At the end of the summer Lydia took a boat to an island off the southern coast of New Brunswick, where she was going to stay overnight. She had just a few days left until she had to be back in Ontario. She worked as an editor, for a publisher in Toronto. She was also a poet, but she did not refer to that unless it was something people knew already. For the past eighteen months she had been living with a man in Kingston. As far as she could see, that was over.

She had noticed something about herself on this trip to the Maritimes. It was that people were no longer so interested in getting to know her. It wasn’t that she had created such a stir before, but something had been there that she could rely on. She was forty-five, and had been divorced for nine years. Her two children had started on their own lives, though there were still retreats and confusions. She hadn’t gotten fatter or thinner, her looks had not deteriorated in any alarming way, but nevertheless she had stopped being one sort of woman and had become another, and she had noticed it on this trip.

A quick summary of Prose's notes on the excerpt: