Give Your Characters the Myers Briggs Test

Back at the end of April, we discussed using the Myers Briggs test to develop your characters. We covered the more obvious personality traits: Extroversion vs. Introversion and Thinking vs. Feeling. I would feel bad if we didn’t take the plunge into rounding out all of the elements of the Myers Briggs test, so here we’re tackling Intuition vs. Sensing and Judging vs. Perceiving, which are often the harder Myers Briggs character traits to explain. 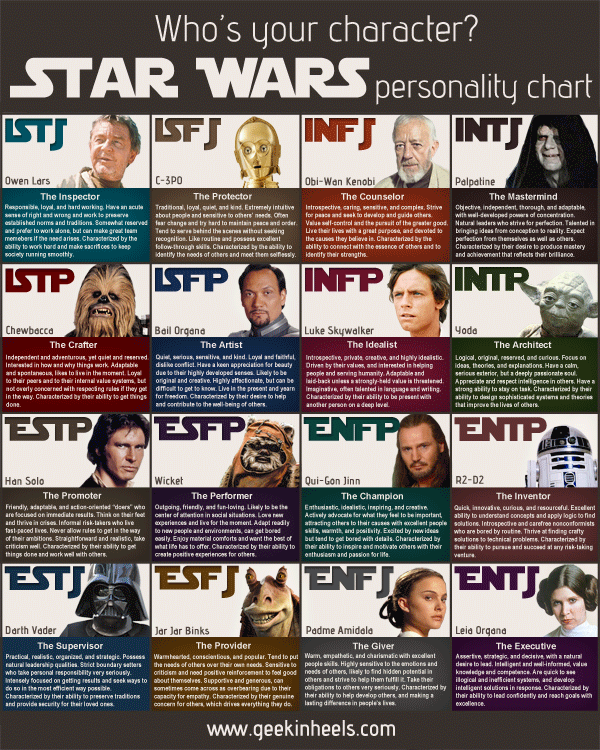 Let’s start with Sensing and Intuition (shown as N in the MBTI so as not to be confused with Introversion).

On the surface, those words seem to mean the same thing. If you’re very intuitive, you would probably also be pretty sensitive (sensing) to your surroundings, right? To an extent, that’s the case; most of us work both intuitively and sensitively according to the MBTI definitions.

Here are some examples of characters with these Myers Briggs traits to give you an idea of what this looks like practically:

Judging vs. Perceiving gets equally confusing on the surface. How are those two terms opposing forces?

According to the MBTI definition, someone who is a Judger tends to prefer structure and order, being settled when a decision is made.

A Perceiver, on the other hand, prefers a more flexible and adaptable lifestyle, tending to gravitate towards the information gathering before a decision is made.

Here are a few examples of characters with these Myers Briggs traits to give you an idea of what this looks like practically:

The Myers Briggs Test and Your Characters

These four traits may not be getting quite as much love in the cultural discourse as Extroversion and Introversion, but they are equally useful in fleshing out a character.

Is the hero of your story more concerned with the larger goal ahead of him (an Intuitive habit), or is he more focused on the details of how to achieve that goal (which is what a Sensor would do)? Maybe the sidekick prefers to know the plan ahead of time (a typical Judging trait), while the hero is more interested in changing up the details to adapt to the changing scenario (Perceivers love to live by the seat of their pants).

Putting opposing personality types in play with each other can create interesting subconflicts, or keeping similar types together can show why the hero and her sidekick work so well together.