A few weeks ago, our group of friends was planning a potluck. One of the girls said she was planning on making vegetarian chili, cornbread, or baking cookies. I cringed internally because the flow of the sentence was wrong and hurt me on the inside. The issue: mismatched parallelism. 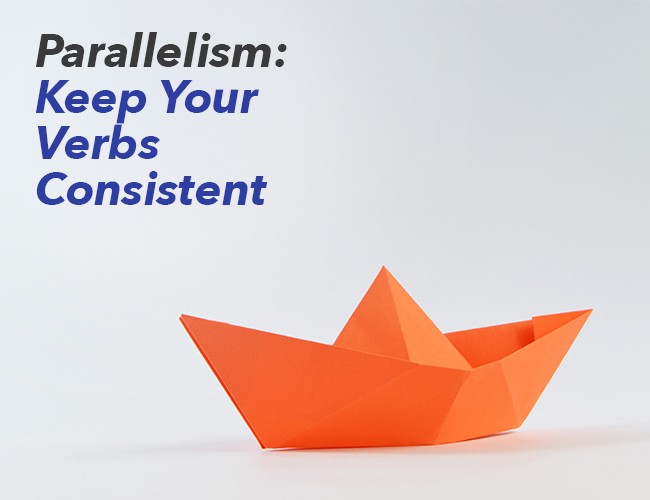 How to Keep Your Verbs Consistent

Parallelism is the practice of lining up all your verb tenses when you have a list of them in one sentence. For example, if you're on your way to the store and you need to get apples, you might find yourself heading straight to the produce section, investigating each apple for bruises, and putting the best four you can find in your cart.

See how the verbs match tense and form? In this example, all the verbs are in their gerund form, leading to a nice flow of both words and ideas.

Get Your Parallelism Straight

Another common example or bad parallelism comes when you, as my friends and I have done, are planning a potluck. You email your friends and volunteer to bring salad, bread, or make dip.

You mean well in your offer, but your parallelism is not good. Because you started with “bring” as your head verb, it needs to remain your head verb for all items in the list. This can be remedied with some rewriting: you can bring salad, bread, or homemade dip. Alternatively you can tell your friends that you'll bring salad, bake bread, or make dip.

The Purpose of Proper Parallelism

The purpose of proper parallelism is the same as that of any grammatical structure: to provide structure and understanding for the reader.

“
Clarity is key to telling your story.
Tweet this
Tweet
And making sure the parallelism in your phrases matches up results in less brain work for the reader.

What do you like to bring to a potluck? Let us know in the comments.

Decide before you start your practice if you're going to have all of your objects be acted upon by the same verb, or if each object is going to have its own verb. Sticking only to that parallel structure, write for fifteen minutes and use parallelism as much as humanly possible. If you're feeling brave, post your practice in the comments; if you post, don't forget to check out the work of your fellow writers!