Parataxis and Hypotaxis: How Greek Makes You a Better Writer

My elementary school experience included three years of Latin in fourth through sixth grade. Believe it or not, that language learning actually came in handy when middle school French rolled around.

It has also come in handy when breaking down literary terms, many of which have their origins in Latin or Greek. Today's Greek words: parataxis and hypotaxis. 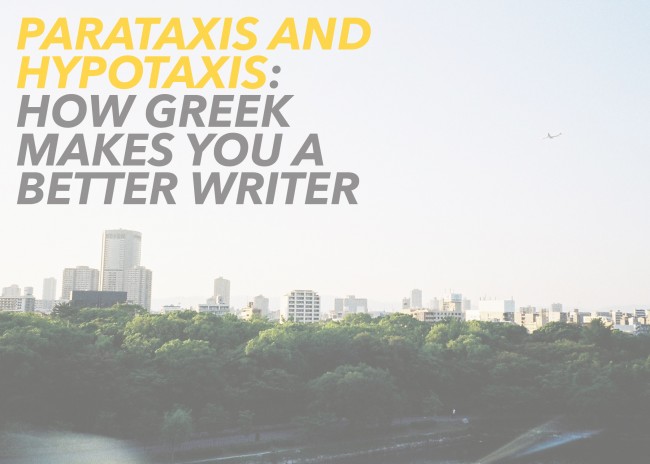 Parataxis is the practice of combining a series of short, concise sentences with phrases that go together, but are not dependent on one another.

Parataxis is also defined as that combination without the conjunctions entirely. Remember asyndeton? Parataxis isn't that much different when it is implemented without conjunctions.

Julius Caesar's famous “Veni, vidi, vici,” while falling under the umbrella of asyndeton, also can be identified as parataxis. These clauses are all complete thoughts, not dependent on one another. A more complicated version exists in Samuel Beckett's Waiting for Godot:

When parataxis is implemented as in Beckett's work, the effect is one of a stop-start train of thought or stream of consciousness narrative. None of the clauses or phrases are given any priority over the others, and even if the reader doesn't actually read the words, the effect is still present and there is an understanding that the audience is in the character's mind watching thoughts just pass through. Additionally, since the phrases aren't given a priority or specified connection, it is up to the reader to provide the missing connections.

Hypotaxis, on the other hand, assigns order and structure to the clauses and establishes a level of importance to each clause in the sentence. This also gives the reader clue as to what they should be focusing on. Connections are explicitly drawn, without one clause the other wouldn't make sense. Therefore, these clauses are dependent on one another.

A good example of hypotaxis can be found in James Baldwin's “Notes of a Native Son”:

When I was around nine or ten I wrote a play which was directed by a young, white schoolteacher, a woman, who then took an interest in me, and gave me books to read, and, in order to corroborate my theatrical bent, decided to take me to see what she somewhat tactlessly referred to as ‘real' plays.

The Difference Between Parataxis and Hypotaxis

Parataxis tends to create a stream of consciousness type of narrative with several independent thoughts. Hypotaxis, on the other hand, builds several dependent clauses upon one another, forming one complete thought.

If you're looking for your reader to stay sharp and alert and keep up with what's going on in your story, hypotaxis may be the way to go. However, if you're writing poetry or a looser prose that may not have an urgent focal point, play around with parataxis. You might enjoy the path that you end up on.

As a writer, do you prefer parataxis or hypotaxis? What about as a reader? Let us know in the comments.

Take a quick second and identify whether you generally prefer hypotaxis or parataxis in your sentence structure. Then spend fifteen minutes writing about the coming of spring in the other style. If you're feeling brave, post your completed practice in the comments, and if you post, be sure to leave notes for your fellow writers.