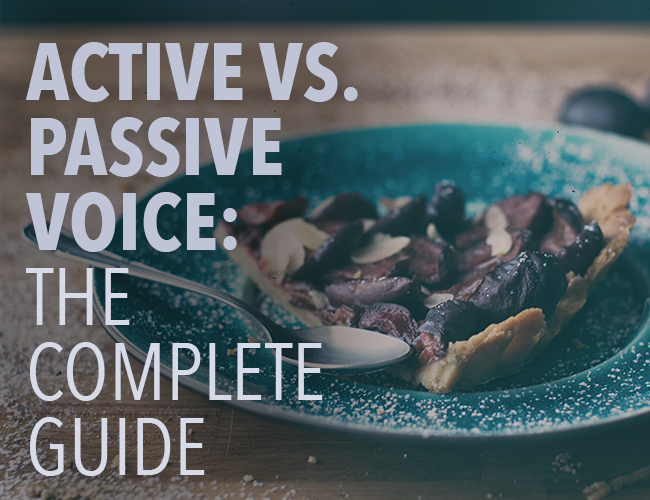 However, you must understand what it is and learn to recognize it so you can choose how to use it effectively.

What Is Active Voice?

A sentence in the active voice is structured traditionally: subject + verb + object.

John will love this pie.

(If this explanation is clear as mud, brush up on subjects and objects here.)

What Is Passive Voice?

The opposite of the active voice is the passive voice.

A sentence is in the passive voice when the word that is the recipient of the action is the subject of the sentence.

Let's use the passive voice in our examples from above:

The toe was stubbed by Beth.

This pie will be loved by John.

Note that in each sentence, there is a form of to be + a past participle. That's a dead giveaway that the sentence is in passive voice.

“
If the subject of a sentence is being acted upon by an outside force, the sentence is in passive voice.
Tweet this
Tweet

When to Use Active Voice

As a general rule, you should use active voice whenever possible. Active voice has a few advantages over passive voice.

It's bold. “Beth stubbed her toe” is more clear, direct, and interesting than “The toe was stubbed by Beth.” Get straight to the point and engage your readers with active voice.

It's succinct. Sentences in active voice are often shorter than their passive-voice counterparts. Cut the fluff and tighten your prose with active voice.

When to Use Passive Voice

That said, you'll encounter occasions in your writing when the passive voice is actually a better choice than the active voice. Here are three times you should use passive voice:

1. When you don't know who did the action

If you don't know who did the action, it's difficult to use the active voice.

The plate didn't fall on its own—it was dropped on the floor.

But who dropped the plate? No one knows.

2. When the person who did the action isn't important

If it's not helpful for your readers to know who performed the action, use the passive voice and don't mention them.

In this experiment, the eggs were placed in vinegar overnight.

The experiment with the eggs is the important bit; mentioning the person who did it would be distracting.

3. When you want your readers to focus on the object of the action

If the main point of the sentence is the noun that receives the action, use the passive voice to foreground it.

All the fruit in the pantry is covered in mold.

The focus in this sentence is on the fruit, not the mold. (Although if you were standing in that pantry, your focus would probably be on the mold.)

It's a Style Choice

Ultimately, both active voice and passive voice are grammatically correct. Determining which to use comes down to your own style choices.

As you edit, consider what you want your readers to focus on and how you want them to engage with your writing. You'll find some instances where passive voice is actually the best choice.

Remember, though, to use the passive voice in moderation, as too much of it is exhausting to read.

When do you use passive voice? Let me know in the comments.

Take fifteen minutes to write about a major historical event, either as an observer or an active participant. Use the passive voice in your writing to describe the action.

Post your practice in the comments, and leave notes for your fellow writers.