Agatha Christie is my all-time favorite author. I was first exposed to her work in middle school through the summer reading assignment of Murder on the Orient Express, which I adored. I then proceeded to tackle pretty much every book by her that I could get my hands on. My favorites are Orient Express (you never forget your first love), The Murder of Roger Aykroyd, and And Then There Were None, which has a brilliant ending that has you throwing down the book emphatically when the red herring is finally revealed.

But wait! What's a red herring? I'm so glad you asked. 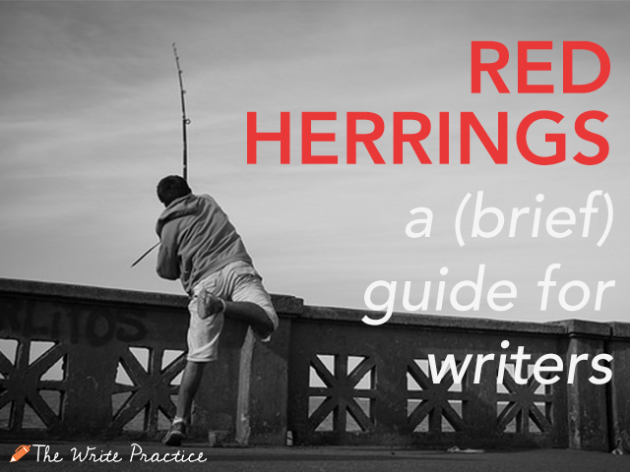 Definition and Origins of Red Herring

Red herrings are staples of the mystery and suspense genres, but they also can pop up in myriad other works and genres. What is a red herring? Here's a good working definition:

A red herring is a clue that takes the reader and/or characters in the wrong direction.

The term has its origins in the training for hunting dogs. Usually when a dog was tracking a scent, it wasn't the only scent competing for the dog's attention. Since fish have a distinct and powerful odor, they were sometimes used to train the dogs to stick to the scent they were tracking when their doggie instincts were telling them that something else smells much more interesting. When the dog followed the fish scent, the dog had followed a red herring (or sardines; trainers probably weren't too picky).

Examples of Red Herrings in Film and Literature

Red herrings are all over the place in literature and film. LOST is full of them, The Killing is a study in them, Agatha Christie was the queen of them in the mystery genre, and the Harry Potter series sees every possible red herring/not red herring combination there is.

But how do you create a good red herring?

A good red herring should weave easily into the details of the story. For example, in Legally Blonde, Reese Witherspoon's character Elle Woods is working a trial defending Brooke Wyndham, who is accused of killing her husband. She can't give an alibi, and her stepdaughter has told an eyewitness account of Brooke standing over the dead body with gun in hand, so it looks pretty bad for Brooke. However, when Elle goes to see Brooke on a solo prison visit, Brooke (a commercial fitness guru) reveals that on the day of the murder, she was having liposuction. This information would destroy her career if it got out, so she chooses to keep mum, even though she has an alibi for the murder.

As much as you want to avoid the obvious red herring, highly well-read individuals may be so genre savvy that they can identify a red herring as soon as it's introduced in the story. J.K. Rowling became reader-savvy as a result, and in Harry Potter and the Half-Blood Prince, Harry's suspicions that Draco Malfoy and Professor Snape are involved in the evildoing are actually proven right in the end. Sometimes it's okay for the red herring to be the actual right track, as long as your herring isn't a three-day-old herring that's stinking to high heaven and making your readers sick.

Have you ever been duped by a red herring? Share in the comments section.

A group of people are having a dinner party when the host is murdered. Write a brief story where you lead your readers and characters to a red herring. How can you indict the wrong person?

Practice writing a red herring for fifteen minutes. When your time is up, post your practice in the comments section. And if you post, be sure to leave comments for your fellow writers.