Has this ever happened to you? You come across a new word — let’s say, omphaloskepsis — and suddenly you’re hearing it every time you turn around. Okay, so that was a bad example, but you get my point. This occurs because you become hyper aware of the new word, now that it has relevance for you. 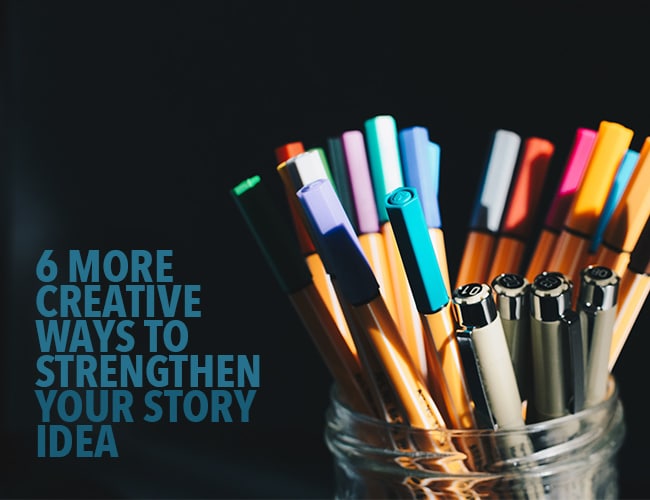 The same thing happens to me all the time with my writing and the works of Stephen King. I love Stephen King, but the man is so prolific, and my reading time so limited, that I haven’t come anywhere close to reading all his books. Whenever I can, I add his audiobooks to my Overdrive queue.

At least a dozen times, I’ve written a scene or a short story, closed my laptop, and gone for a jog with my headphones, only to hear that Stephen King has beaten me to the punch. This is because I’m hyper sensitive to what I’ve just written, seeing it reflected everywhere I look, making me paranoid that I just inadvertently committed an act of plagiarism.

6 Ways to Distinguish Your Story Idea

Nearly every story you care to name has bits and pieces or elements from other stories. It’s unavoidable, since we’ve been telling stories from the dawn of human existence. Most of your story ideas are going to resemble existing stories in some way.

So, how do you take the seed of a story that feels too much like it’s already been done, and make it your own?

A couple of months ago, I wrote an article showing you six ways to do it, and today I’ll share six more. I’ll refer to a lot of movies in my examples, because chances are good you’ve seen it, or at least heard about it.

1. Spin a story idea another way

There are several approaches you could use to achieve this. For instance, you could cross genres.

Look at Hitchcock’s thriller, Strangers on a Train, and its comedy twin, Throw Mama From The Train. Forbidden Planet is the science-fiction retelling of Shakespeare’s The Tempest, while Outland puts a science-fiction spin on the classic High Noon. The satirical Dr. Strangelove and Fail Safe both deal with the concept of an accidental nuclear war, but one is comedy and the other one drama.

Rather than genre, you could change up the setting. Broadcast News is basically All About Eve, set in the world of television news. The movie Identity shares a whole lot in common with Agatha Christie’s And Then There Were None, but in a different setting, and with an extra twist. The Lion King takes Shakespeare’s tragedy Hamlet out of Denmark and spreads it over the African savanna.

Or time period. Think about how this has been done before.

Arthur Laurents took Shakespeare’s Romeo and Juliet and came up with West Side Story. 10 Things I Hate About You is a modern version of Taming of The Shrew. Jane Austen’s Emma was the inspiration for the movie Clueless. And the Coen brothers drew upon Homer’s Odyssey when they came up with O Brother, Where Art Thou?

You could change the main character’s gender, age, or relationship to other characters. Or try this favorite trick of mine — look at a story through the eyes of another character and see where that takes you. Did you know that the movie Rosencrantz and Guildenstern Are Dead is the story of Hamlet, told from the point of view of two minor characters? A new perspective can lead to a whole new story.

You may argue that these stories are derivatives, but I ask you, “What isn’t?” Instead of worrying about how your story idea is the same as someone else’s, concentrate on how you can apply your unique talents and personality to making it different.

2. Put a unique twist on an old story idea

Ask yourself how you can twist your idea in a way that hasn’t been done before. For instance, both Nightmare on Elm Street and Dreamscape deal with the ability to break into a sleeping person’s dreams. Nightmare used that power for evil, while Dreamscape aimed to use that power for good.

Likewise, Back To The Future and Peggy Sue Got Married deal with an age-old idea in different ways.

You might change it up with a unique setting: The Martian, Titanic, The Gods Must Be Crazy. Or maybe it’s your main character that makes the story unique: Willy Wonka, Forrest Gump, Benjamin Button.

Find something unique about your story idea and capitalize on it.

If you’ve studied art or graphic design, you know how important contrast is in creating a stunning piece. The same goes for story.

You can create contrast with your characters. Try developing two characters with very different personalities and forcing them to work together, or travel together, or live together. Think: The Odd Couple, When Harry Met Sally, Lethal Weapon, Thelma and Louise, Face/Off, Annie Hall.

Throwing your contrasting characters together will set off sparks, facilitate the use of exposition as ammunition, and help spawn new ideas for how to keep your story fresh.

Remember, story is about conflict, so these contrasting techniques are a great way to strengthen your story idea. Here’s another one to try. Take your main character, cast him into an alien environment, and you’ve got instant conflict and the bones for an exceptional story.

Developing this kind of contrast is a hugely powerful device. Think: ET, Arrival, The Wizard of Oz, North by Northwest, One Flew Over The Cuckoo’s Nest, In The Heat of The Night, Jurassic Park, Witness, City Slickers, Splash, Crocodile Dundee.

I could go on and on. If your story idea feels stale, brainstorm to come up with settings that will challenge your character.

“
If you story idea feels stale, put your character in an environment that will challenge them in unusual ways.
Tweet this
Tweet

5. Use combinations and hyperbole.

If you’ve got a story idea that seems a little flat, or a little overdone, see what happens if you mesh two ideas and take it to the max.

For instance, Michael Crichton didn’t just write about a theme park or a zoo. He combined the two concepts and went extreme, creating the ultimate theme park experience in Jurassic Park.

Indiana Jones is not just an archeologist or an adventurer. He’s both, to the extreme. Rebecca De Mornay didn’t just play a nanny and a seductress in The Hand That Rocks The Cradle. She played the seductive nanny from hell. James Bond isn’t just a spy and a ladies’ man, he’s the ultimate on both counts.

You can go a long way on the strength of a particularly intriguing story opening. If you can come up with a really interesting way to kick off your story, it will hook the reader. But beyond that, it can energize the whole creative process and start a domino effect of story ideas for you to explore.

Remember Newton’s First Law of Motion — an object in motion tends to remain in motion. Once you start the momentum rolling, it’s often enough keep the old idea mill churning out the good stuff.

Below are some examples of great openings that hook audiences, and this goes beyond the cinematic effects. The elements of story are strong in these openings, laying a groundwork to carry readers — or in this case viewers — well into the story.

I hope you see that by changing up the elements of your story idea, you can spin things off in a new direction, sparking inspiration. This can be just the impetus you need to freshen and strengthen your story idea, making it into something only you can create.

How about you? Do you have a favorite method you use for coming up with fresh story ideas? Share it with us in the comments section.

Take a look at a current story idea you’re working on. Try one or more techniques from the article to give it a new twist. How does that strengthen the concept? Where will you take it from here?

If you don’t have a current story idea, try taking someone else’s idea, such as a movie you watched recently, or a book you read, and use one of the methods to tweak it and see if it spins off any new ideas.

Write for fifteen minutes. When you’re finished, share your story idea in the comments section. And if you post, please leave feedback for your fellow writers!