Is it Toward or Towards? Upwards or Upward?

English is full of words that seem the same, but have subtle differences in their spelling and usage. These tricky words seem designed specifically to trip you up. Recently, we tackled ensure vs. insure. Today, let’s take on another vocabulary conundrum: upwards or upward? Toward or towards? 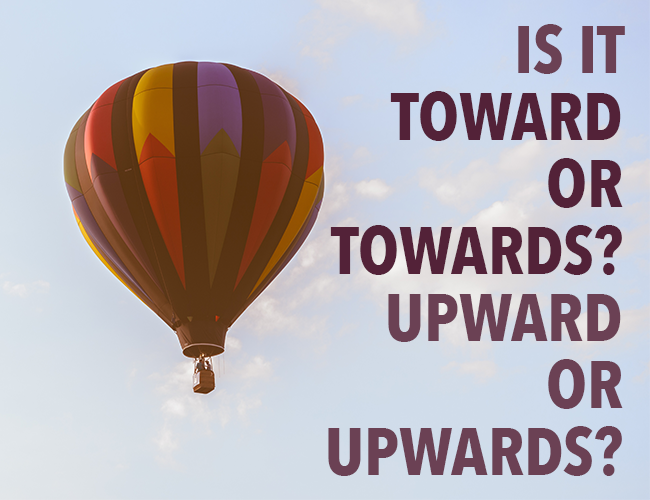 Or does it even matter?

You can feel comfortable using either one.

Both are correct, and they can be used interchangeably.

Is One Ever Better?

The main difference between the two forms is whether the word is an adverb or an adjective. In general, when you’re in need of an adjective, remove the “s.” Add it back on if you’re looking for an adverb.

Sandra looked upwards at the gathering clouds and wished she’d remembered her umbrella.

Doug let go of a balloon and watched its upward motion as it drifted towards the sky.

This is true for most -ward words: downward, upward, forward, backward, toward, etc.

The main exception is afterward(s), which is always an adverb. In that case, the “s” is a signal of formality level. It’s considered more formal to omit it.

But Why Are There Two Versions?

I know I just told you to use an “s” to make an adverb or drop it to make an adjective. But really, that’s a guideline, not a hard-and-fast rule.

This is one of those areas where American English and British English diverge. In general, no matter which part of speech they’re using, Americans prefer to drop the “s,” and Brits like to include it.

Even style guides differ in their recommendations. The Chicago Manual of Style acknowledges the differing approaches of American and British English, while AP style states that “toward” is correct and “towards” is just wrong.

(In fact, “s” or no “s,” “toward(s)” is almost always a preposition, occasionally an adjective. But it’s not an adverb, so adding the “s” doesn’t suggest any extra meaning.)

Toward or Towards? Consistency is Key

American style, British style, or adverbs vs. adjectives? All of these standards are valid, and you can decide which guide you prefer.

No matter which version you pick, just be sure to maintain consistency.

And with this vocabulary confusion un-muddled, it’s onwards and upwards! (Or . . . onward and upward? Oh dear.)

Need more grammar help? Once you master toward (or towards?), check out my favorite tool that helps find grammar problems and even generates reports to help improve my writing: ProWritingAid. Works with Word, Scrivener, Google Docs, and web browsers. Also, be sure to use my coupon code to get 25 percent off: WritePractice25
Coupon Code:WritePractice25 »

American, British, or adverbs vs. adjectives—which style do you use? Let us know in the comments.

Write about baseball for fifteen minutes. Use the -ward words as much as you can with or without the “s,” depending on whether it’s an adjective or an adverb. Post your practice in the comments and take some time to read the practices of your fellow writers too.