Relative Pronouns: How Not to Ruin a Sentence

Oh, relative pronouns. You crazy, crazy kids. You can cause so much frustration with your misplaced thats, whos, and whichs. Let’s have a chat and sort you all out, shall we? 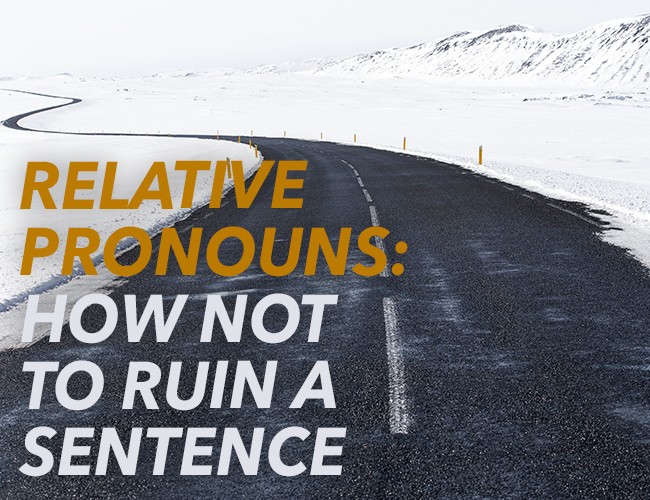 Let’s say you’re telling a story about Weston, a neurologist with a bionic elbow. When do you use which relative pronoun?

When to use who

Weston has a lady friend. Her name is Eugenie. Eugenie is the woman who saved Weston’s left arm by performing surgery and attaching the bionic elbow.

Who is used when you’re talking about people, and those people are the subjects of your sentence. Eugenie is the subject of the above sentence, and so we use who.

When to use that

Weston also has a pet iguana. Its name is Reptar. Reptar is the reason that Weston is so popular with zookeepers. Reptar’s tongue is the thing that freaks out skittish women at his office.

Generally, that is used when you’re describing a thing by using a restrictive clause.

“
A restrictive clause is a clause that, if removed, leaves the sentence making no sense.
Tweet this
Tweet
If you remove the clause after the “that” above, the sentence doesn’t make a ton of sense.

When to use which

Eugenie, Weston’s lady friend, has an antique microwave collection. Her favorite microwave, which is also her oldest microwave, is one from the early 1970s.

Do you have any tricks that help you remember which relative pronoun to use? Let us know in the comments.

Tell the rest of Weston the neurologist’s story (or at least fifteen minutes’ worth of it). Use who, which, and that properly to describe Weston’s typical Tuesday.

Write for fifteen minutes. Post your practice in the comments.