Why You Need to Use the Oxford Comma (or Not)

Most of the fun of writing is using your words to tell a story. The words skip across the page, delighting in the joys of Maureen finally finding her Henry, shuddering as Ingrid uncovers her third dead body of the day, or mourning with Carlos for his lost mother. But I'm not here to talk about words. I'm here to sing the praises of punctuation, specifically, the Oxford comma. 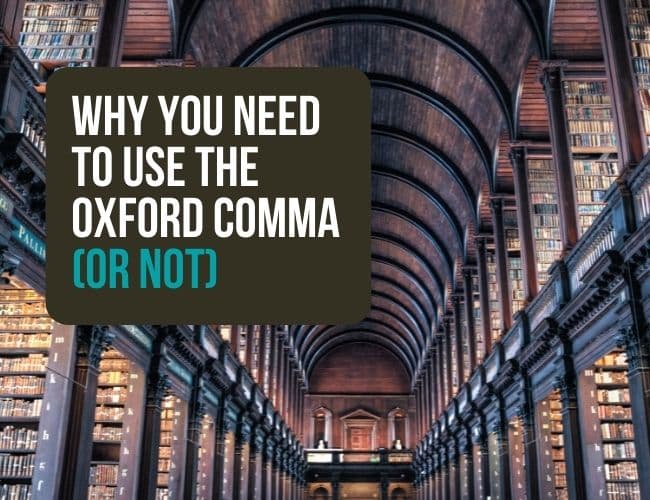 What Is an Oxford Comma?

Most people I've met have no idea what the Oxford comma is, but it's probably something that you have used. What is it? It's a punctuation mark so fantastic that a hipster band wrote a song about it. But basically, it's the last comma used in a list.

Let's observe the Oxford comma in its natural habitat:

While Sean was waiting for Kyle to pick up Chinese for dinner, he scraped the paint off the bathroom door frame, alphabetized his books by main character's first name, and successfully startled the neighbor's dog twice.

The last comma in that sentence above is an Oxford comma, also known as the serial comma or the Harvard comma. Its purpose is always the same: it comes before the conjunction (in this case, “and”) in a list of items.

Is the Oxford Comma Required?

This is often a heated debate, but the answer is: it depends. If you are publishing with a press or publication that uses a style guide that requires the Oxford comma for clarity, then yes, it's required.

Style guides are used in academics, publishing, and business to provide a consistent guideline for writers. For example, Modern Language Association's Style Manual (MLA), the Chicago Manual of Style, and the American Psychology Association Style Manual (APA) all require the Oxford comma.

For journalists who use the Associated Press Stylebook or AP Style, the Oxford comma isn't required.

If you are writing legal documents where the inclusion or omission of the Oxford comma changes the contract or policy, then yes, it's a good idea. (Unless you want your comma use to contribute to a ten million dollar lawsuit loss like this company.)

If you have a list and omitting the Oxford or serial comma confuses the reader, then yes, it's a good idea.

If you're writing fiction and making a stylistic choice that your editor and publisher support (like the McCarthy example in this article, Why the Oxford Comma is Pretentious), then erase those commas to your heart's content.

“
If you're going to break with convention, know why you're doing it, and the effect it will produce.
Tweet this
Tweet

It's important to note that style guides and grammar traditions vary depending on the country and language. So if you are writing outside the U.S., make sure you check out examples in the format and publication you're writing in.

When the Oxford Comma Changes the Meaning

So what's a writer to do who just wants to be clear? Here's an example where the use of the Oxford comma changes the meaning:

Amanda found herself in the Winnebago with her ex-boyfriend, an herbalist and a pet detective.

Amanda found herself in the Winnebago with her ex-boyfriend, an herbalist, and a pet detective.

One comma makes the difference between an awkward road trip with two people and a potentially hilarious road trip with four people. Make sure you're punctuating the story you want people to read.

Grammar as a Matter of Style

When we learn grammar in school, these rules are often presented as black-and-white, clear, and cast in stone. The reality is that language and grammar rules shift over time, and the conventions are surprisingly flexible as a matter of style.

As writers, we're wise to pay attention to how those rules work in different contexts and publications, not only so we use them correctly, but also so we can break them on purpose for a specific effect.

What arguments have you heard about the Oxford comma? Share in the comments.

Need more grammar help? After you master the Oxford comma in the practice section below, check out our tutorial Grammar 101. You too can write pop songs about Grammar terms!

Need even more grammar help? My favorite tool that helps find grammar problems and even generates reports to help improve my writing is ProWritingAid. Works with Word, Scrivener, Google Docs, and web browsers. Also, be sure to use my coupon code to get 20 percent off: WritePractice20

Write for seven minutes using the following sentence prompt as a starter. Then take another seven minutes, add an Oxford comma to the prompt, and write again. See how your story changes. Share one version in the practice box below and leave feedback for three other writers.

Prompt: Jeremy turned and faced Leslie, his sister and a police officer.