Word Count: How Many Words In a Novel?

If you want to get published, you need to be aware that major New York publishers are looking for a specific word count, depending on your genre. Your fantasy novel word count needs to be different than your YA Fiction book, which has a different word count from other books.

How many words are in a novel? Or at least one in which publishers might be interested? In this post, we're going to explain word count and how it affects your chances of publishing success. 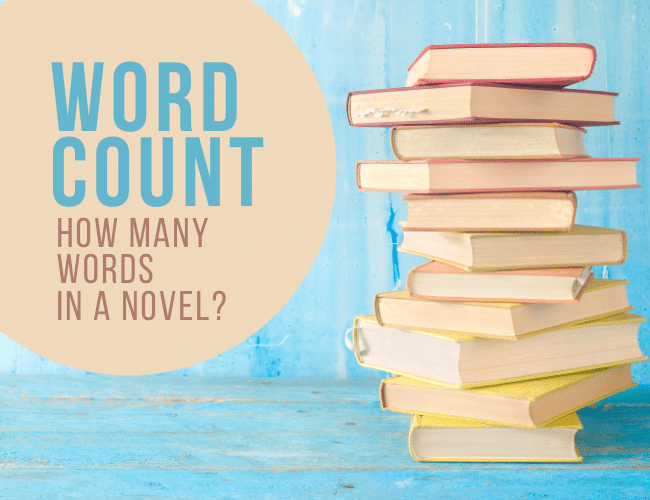 How long is the average book? How long should your book be? And should you even care about word counts? Let's break it down.

​You might question whether or not word count matters.

Whether you are self-publishing or traditional publishing, the amount of words in a book varies for different genres, and it's important for you to meet word count guidelines in order to satisfy reader and publisher expectations.

Although best-selling writers can get away with longer books, most writers, especially those writing and publishing a first book, need to stick to the standard book length for their genre.

Sure, there are exceptions: epic fantasy novels, for instance, can get really long. But even those stories have an average word count that shouldn't be overlooked.

Long books aren't bad books, and novellas or short stories don't make for less impressive stories. But too little or too many words can throw a reader.

Best of all, the constraint of a word count requirement might actually improve your story. While every writer has trouble killing their darlings, trimming down a long first draft might be just what the editor ordered.

Why You Should Write to Word Count

Right now I'm obsessed with a novel/web serial called Worm. It's by an author who goes by the pen name Wildbow. The novel is 1.75 million words long, the equivalent of about 7,000 pages, give or take. When I first opened it on my Kindle, it said it would take 110 hours to read.

This novel is too long to publish, at least by a traditional New York publisher.

I'm telling you this because I want you to know publishers are particular and risk averse. They want books to look a certain way, be a certain length, fit a certain market.

Does that mean you shouldn't write your million-word epic of a novel? No, you absolutely should. But only if you're open to not getting published traditionally.

Sure, there are caveats.

Sometimes, publishers are so taken with a book that they're willing to risk a book that's too long or too short. Fantasy and Sci Fi stories are the most likely to fall into this exception list, and there are plenty above the word count that have gone on to become bestsellers.

However, with the way the market is going right now, the number of risks traditional publishers are willing to take is shrinking more and more.

Second, there's a reason publishers look for books of these lengths. Publishers think books of this length sell the best.

They may be wrong or shortsighted, but they've been doing this a long time, and it's at least a good idea to keep them in mind.

Books of certain lengths have proven to engage readers, and thanks to self-published authors selling on Amazon, so have books outside those lengths.

Why You Should Count Words, Not Pages

Most people think in terms of pages, not words. So why does the publishing industry speak in word counts?

Because page length can vary widely. If the font is a bit smaller or the margins are a bit wider or the page size is a bit larger, it will result in a completely different page count.

If the publishing industry spoke about page numbers, the number would constantly change depending on the stage the book was in. Word count, on the other hand, stays pretty much the same.

How Long is the Average Book?

However, book length varies widely between genres, among authors, and based on the content of the book. There is no standardized rule—although traditional publishers and literary agents are likely to favor a book that is within the average word count for its genre.

But what's the average word count for each type of story?

Let's break it down by genre. 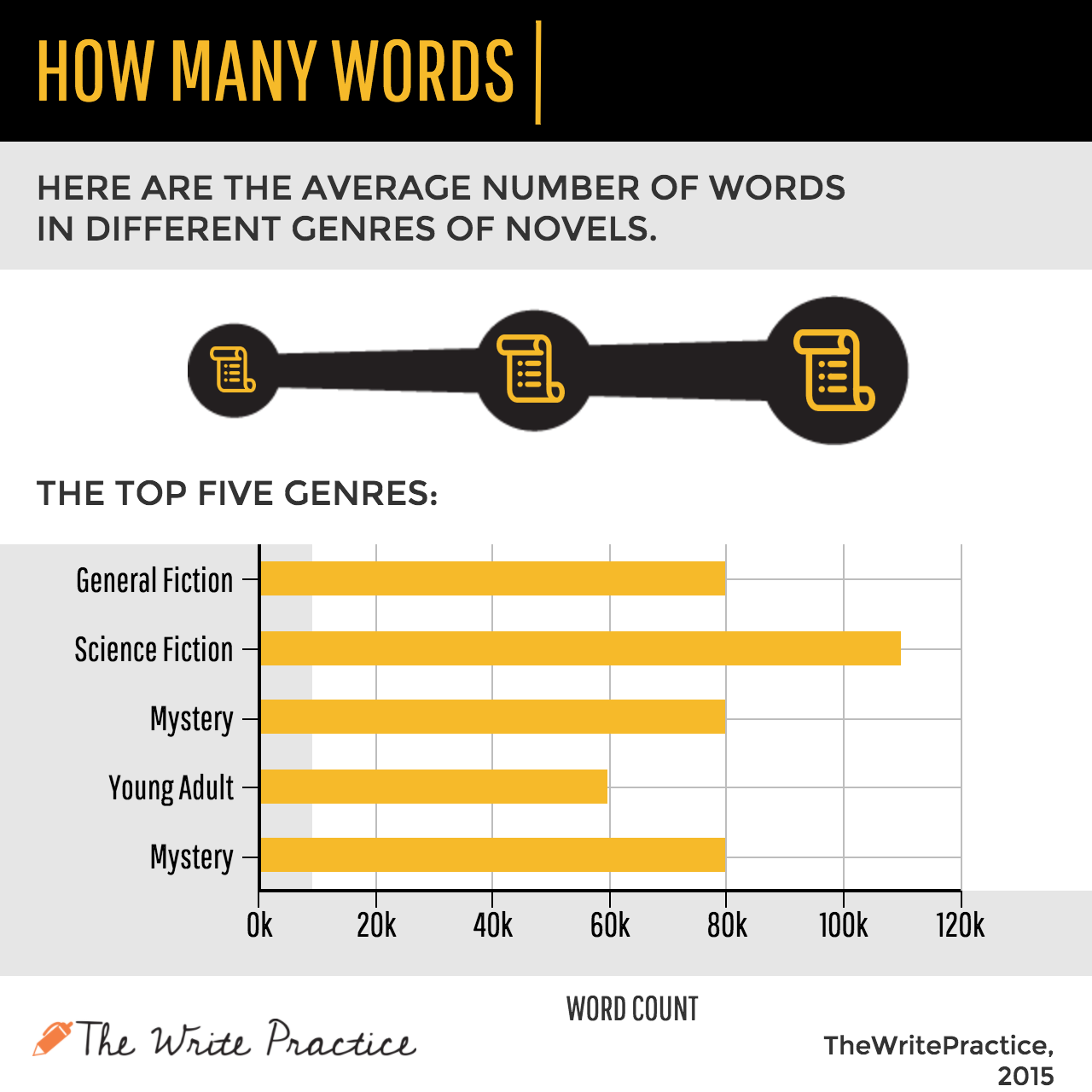 A novel is usually defined as anything over 40,000 words. There's technically no max length to a novel. Although if it's over 110,000 words, some may call it an epic, not a novel.

Famous novels have been extremely long, like 530,000 words for Victor Hugo's Les Miserables or 420,000 words for George R.R. Martin's latest, A Dance With Dragons.

Novels can also be extremely short, like Ernest Hemingway's Old Man and the Sea, which is just 26,000 words.

The number of words in a typical novel (i.e. publishable novel) varies depending on the genre.

It also might change based on when it was published. Consider the length of a contemporary book compared to a title by Charles Dickinson, who was paid per word and therefore far more motivated to write longer stories.

Most traditionally published novels for adults are about 90,000 words. They can go as high as 110,000 words. However, longer than that is too long for most publishers, especially if you're a first time author. 70,000 words or less are usually too short for the average publisher.

You might also consider the category of the book, or the age group typically reading it. Middle grade books, for instance, will fall shorter than adult fiction, probably around 60,000 words.

Children's books will have the lowest word count of all.

Again, this doesn't necessarily apply if you've already published a bestseller. Publishers, at that point, will let you do almost whatever you want.

This goes for debut novels, and seasoned writers.

YA Fantasy novels, too.

Consider how J.K. Rowling's Harry Potter and the Sorcerer's Stone, which its drastically shorter than the later books in the series starting after The Goblet of Fire.

Part of the reason for this is that Harry Potter actually jumps from middle grade to young adult in the series, and they're also longer because Rowling was selling millions of books by the end of the series.

Rowling had proven that readers were going to read her stories regardless of their length. I'll give an exact word count difference in her books later in this post.

I found some disagreement about the ideal length of mystery novels.

Traditionally, mystery novels have tended to be on the shorter side. Agatha Christie, the best-selling mystery writer of all time, wrote novels that averaged about 40,000 to 60,000 words.

However, most agents and writers say your mystery novel should be the same word count as general fiction, 80,000 to 90,000 words. We'll do more research on this, but if in doubt, shoot for 80,000 words.

Young adult novels have a wide variation in lengths.

I mentioned J.K. Rowling earlier in this post. She started with shorter novels—The Sorcerer's Stone was 76,000 words—perhaps because her editors were restricting.

As she gained their trust, her novels ballooned. The longest is The Order of the Phoenix with a word count of 257,000 words.

Outside YA Fantasy, however, it's unlikely that YA Fiction will run to such a length. For examples look to the YA Fiction leaders in the publishing world like John Green, Angie Thomas, Adam Silvera, and Becky Albertalli.

If you've read any of these authors books, you know that the length of a book does not determine a book's quality. Most of their books fall within the average YA Fiction word count length, and they're glorious.

(For YA Fantasy fans, look to Suzanne Collins, Cassandra Claire, Sabba Tahir, and Maggie Steifvater, among others.)

Others, like Wildbow, whom I mentioned earlier, are writing epic books of a million words or more that take months to read.

Publishers are sticking with their word count lengths, but in the Wild West that is the publishing marketplace right now, the idea word count is largely up for grabs.

I hope this helps you be more informed about word count in the publishing industry, but the rule is:

First, write a great story. Worry about your word count on the second draft.

What about you? Do you think about the word count as you write? Let me know in the comments.

What do you think? Do these word counts surprise you?

Post your word count results in the comments section so we can learn from your research!