The Best First Line of Your Novel

Happy Day Three of NaNoWriMo 2015! How's that word count so far? I'm allowed to ask that, because this year I'm actually participating. I've written a book in four months before, but writing a book in one month? Insanity, but here is what I've learned and struggled with so far. 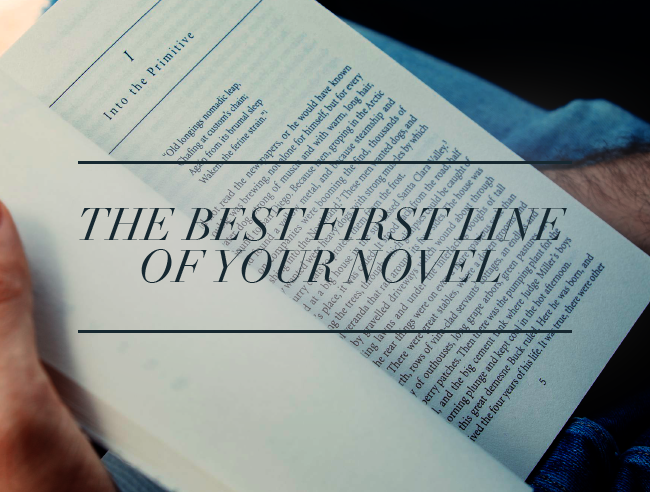 With each book I've written, the hardest part was the beginning. Not only the beginning but specifically the first line. The blank page and blinking cursor is one of the most intimidating things for me as a writer. What's in a first line? Is it supposed to be meaningful? Insightful? A play on words?

Determined to solve my problem of writing weak and confusing beginnings, I did some research. I checked out a list of the top 100 first lines from famous novels and looked for common themes. Here's what I learned:

Anna Karenina by Tolstoy is a novel about a family and their messes: the secrets, the dreams, and the affairs. Here is the first line from the book:

Happy families are all alike; every unhappy family is unhappy in its own way. —Leo Tolstoy, Anna Karenina (1877)

A Tale of Two Cities

The Catcher in the Rye

The Catcher in the Rye is about a teenage boy wandering The Big Apple, calling people phony, and questioning innocence.

If you really want to hear about it, the first thing you'll probably want to know is where I was born, and what my lousy childhood was like, and how my parents were occupied and all before they had me, and all that David Copperfield kind of crap, but I don't feel like going into it, if you want to know the truth. —J. D. Salinger, The Catcher in the Rye (1951)

What Makes a Great First Line in a Novel?

What makes these such great first lines in novels?

They all connect deeply to the problem.

The problem is the most important aspect to your book. It's the reason the book needs to be written, because there is a problem that needs to be solved. By alluding to your problem in the first sentence, your reader is able to decide if the problem in your book is one they want to solve with you.

Every one of the first lines in the examples above relates directly to the problem in the book. Anna Karenina alludes directly to the family drama that encompasses most of the book. A Tale of Two Cities' first line contrasts the two cities and hints at the problems within the cities. The first sentence in The Catcher in the Rye immediately connects to the conflict that runs through the entire book: Holden's discontent and apathy towards the future.

All books are about solving problems, and the deeper the author connects to the problem in the first sentence, the more likely the reader will continue reading.

Two Questions to Check if Your First Line Is Good Enough

When your reader picks up your book and reads the first sentence, they want to know two things:

1. What is your book about?

The first sentence is often a great place to introduce your premise or core idea. Look back at the examples above. The first sentence relates back to the plot every time. Whether in a direct way like Catcher in the Rye or in a more indirect/mysterious way like A Tale of Two Cities. Try hinting at your core idea in your first sentence.

Will your first sentence answer those questions? Let us know in the comments.

Write the first line of your novel. If you already have a first line, ask yourself the questions at the end of the post and see if your first line answers them.

Share your first line in the comments, and leave some feedback for your fellow writers.