Hi, fellow writers! I'm currently in New York City in the middle of a move, so this post will be short, sweet, and (hopefully) helpful. I now present six prompts to help you tackle characterization and get to know your characters better. 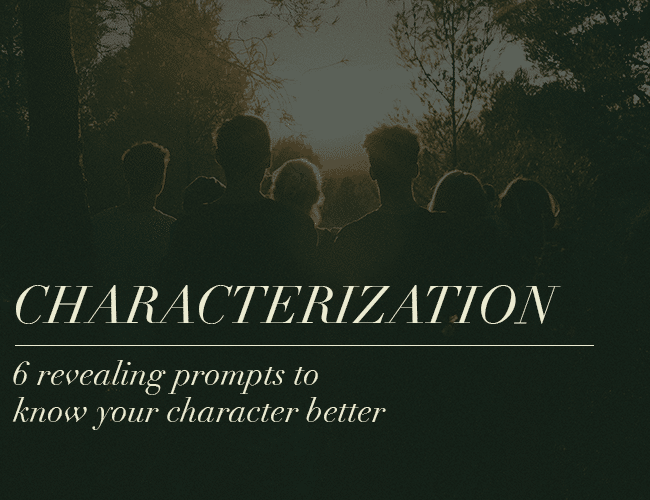 You need to know your characters like you do other humans, and these six prompts will help you pull that off.

Write about your characters as children responding to parental authority.

It doesn't matter if your characters are children, adults, orphans, witches, fairies, or warriors. It also doesn't matter if the “parents” are actual parents or just nuns and teachers, or military generals, or even just the Village Wise Woman Who Knew Everything And Had Old Gnarled Hands.

The relationship your character developed with those in loco parentis goes a long way toward determining how they respond to authority figures for the rest of their lives.

Figure this out, and you'll have an idea why your characters mouth off to their boss, or cringe away from the local magnate, or absolutely insist on treating the prince like just another guy.

“
Characterization prompt: How did your characters respond to their parents when they were kids?
Tweet this
Tweet

Write about your characters as children responding to peers closer than friends.

Your character may be an only child, but that doesn't matter; this is about always-there relationships, the other youths who influenced their lives. Siblings can be best friends or best enemies. They can be mild bullies, only to turn protector when real bullying is at stake.

They are a constant presence, and the development of that relationship influences the way your characters respond to people in their lives as adults.

How quickly do your characters let people in? Sibling relationships have a lot to do with whether they think anyone else can be trusted.

Write about your characters as children responding to a bitter enemy.

Enemies look very different from childhood to adulthood, but that makes them no less serious. Kids have very distinct ideas about bad people. Those may be serious bullies, or terrible schoolmates, or even someone in their home. This is the person who would, your character knew, leave them to drown in an accident.

The way your character dealt with enemies in their youth has a lot to do with how they deal with them as adults because it involves assumptions about other people's thoughts and emotions.

It also involves how your characters prepare to defend themselves, emotionally and physically, which is a whole other kettle of fish. “They always___” what? What does your character assume?

Ah, but not everyone falls in love. Some folks are aromantic or asexual; it's important to consider that when developing your character's emotional path. Did your character not fall in love, in spite of expectation? How did that make them feel? What conclusions did your character draw from the experience?

Figuring this out will help you see how and why your characters respond to other people.

Write about your character's first experience with death.

This doesn't have to be a person, but it needs to include finality. The shock of being mortal; the loss of whoever or whatever died. The way your character wrestles with this can affect everything from their view on God to their personal level of paranoia or fear.

Knowing this will show you what your characters fight to avoid or run toward without hesitation.

This can be a hard topic to write about. Don't pull away; let your character swim deep.

Write about the moment your character realized what it would take to get the thing they want.

The goal itself can be as simple as a high school diploma or as complicated as another human being's affection, as big as control over a country, or as small as a single blue diamond. This is the crossroads: when your character has the choice to pay the price and go after their goal, or not pay the price, leaving that goal behind.

This is important to know—especially since your character might not have thought this through before embarking on the quest.

These six prompts are hardly all there is to your knowing your characters, but they're a start, and if you follow them, you'll have a much easier time writing a vibrant, relatable story. You can check out our guide to stronger characterization here. Remember, characterization is revealed through what your characters do, so put them in these tough situations and see how they respond. Good luck!

How do you get to know your characters? Let me know in the comments section.

You have six characterization prompts to choose from today! Pick one, write for fifteen minutes, and post your workin the practice box below. Don't forget to respond to three other writers!