What Is an Epigraph? A Smart Author’s Guide for 2023

by Liz Bureman and Sue Weems

If you've opened a novel and seen a quote on the opening pages then you've seen a literary epigraph. But what are they really? Why do authors use them? And how do you know if you need one for your own work in progress? 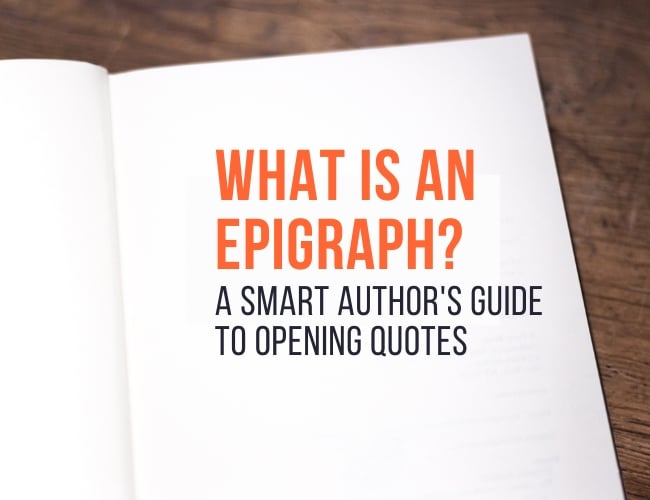 What is an Epigraph?

The word epigraph means to “inscribe” or “to write on.” A literary epigraph is usually a short or block quote from another piece of literature (usually well-known) that gives the reader a sense of what's to come. This technique of using a quote from another author to introduce a novel's tone, content, or summary is called an epigraph.

Epigraphs will be enclosed in quotation marks most of the time since they are direct quotes, and the title or author will usually accompany the quotation.

Sometimes an epigraph can be a fictional quotation, such as at the beginning of John Green's book The Fault in Our Stars. It begins with a fictional quote from a book called An Imperial Affliction which doesn't exist outside the novel but is important for the storyline of the entire book.

Where is an Epigraph Located?

A single epigraph usually appears on the first page of a novel, before the action begins, but it can also make appearances throughout a story. It can be especially powerful at the end of a work, depending on the denouement.

You might also see epigraphs pop up in between parts of a book, if a novel is sectioned into acts, in order to aid in the transition of the narrative. Or an epigraph might intentionally mislead when the actual content of the story subverts this expectation, and the epigraph is meant to be taken more satirically.

Where Can an Epigraph Come From?

Anywhere! Quotes can come from other works of fiction, proverbs, religious texts, nonfiction writings, song lyrics, journalistic pieces, or film or television scripts, among other sources. You could even use American Sign Language in your epigraph if it's relevant to the novel's contents.

The choice of source in addition to the actual content sets expectations, and gives clues to the reader for how to approach the story. A quote from a comic strip is likely going to set different expectations than one from a Shakespeare play.

An epigraph that cites the writings of Carl Jung might indicate that the work should be approached a bit more clinically than if it had been taken from the Sermon on the Mount in the New Testament of the Christian Bible.

What are Some Famous Examples from Literature?

One of my favorite examples of epigraphs is in National Book Award winner, Jesmyn Ward's novel Salvage the Bones. She uses three quotes, one Biblical, one from a poet, and one from a modern song lyric:

“See now that I, even I am he, and there is no god with me; I kill and I make alive, I wound and I heal, neither I there any can deliver out of my hand.” Deuteronomy 32:39

“For thought I'm small, I know many things,
And my body is an endless eye
Through which, unfortunately, I see everything.” Gloria Fuertes, “Now”

“We on our backs staring at the stars above,
Talking about what we going to be when we grow up,
I said what you wanna be? She said, ‘Alive.'” Outkast, “Da Art of Storytelling' (Part I),” Aquemini

This combination of quotes works together to set the tone and to foreshadow the fight for survival that is coming for the story's young narrator Esch Baitiste facing pregnancy, poverty, and Hurricane Katrina's impending reckoning.

The Sun Also Rises by Ernest Hemingway contains two epigraphs, one from his contemporary Gertrude Stein and the other from the Bible:

“You are all a lost generation.”

“What profit hath a man of all his labour which he taketh under the sun? One generation passeth away, and another generation cometh: but the earth abideth for ever. The sun also ariseth, and the sun goeth down, and hasteth to his place where he arose…”

Hemingway puts these two quotes in conversation before the novel even begins and in a sense tells us where he got his title for the novel. The reader is left asking what creates a lost generation and what is the role of this life cycle referenced in Ecclesiastes?

In Gillian Flynn's thriller, Gone Girl, she begins with a quote from Tony Kushner's The Illusion:

“Love is the world's infinite mutability; lies, hatred, murder even, are all knit up in it; it is the inevitable blossoming of its opposites, a magnificent rose smelling faintly of blood.”

See the references to love and murder and how the two intertwine? That one sentence gives the reader an idea of what you're getting yourself into.

Should You Use an Epigraph in Your Novel?

Obviously the answer depends on the book and what you're trying to accomplish. Epigraphic quotes need to be more than just quotes that inspire you.

The main thing to keep in mind with an epigraph is that the chosen text should relate back to the story at hand, whether it foreshadows events to come, highlights a point that the author wants to make, or introduces a new theme to in a section of the work.

Whether you choose a witty statement or a quote from a scholarly book, ask yourself how the quote functions in relationship to the whole. Does it set the tone? Hint at theme? Spark curiosity? If so, it might be a solid choice.

Epigraphs can feel like a shared secret that can only be fully known once the entire book is finished. As a literary device, it's like a bow on a beautifully wrapped package: enhancing the contents and their delivery.

What's one of your favorite books with an epigraph? Extra credit if you can find the epigraph and share it with us in the comments section!

Need grammar help? My favorite tool that helps find grammar problems and even generates reports to help improve my writing is ProWritingAid. Works with Word, Scrivener, Google Docs, and web browsers. Also, be sure to use my coupon code to get 20 percent off: WritePractice20

Write Practice Pro community members can post your epigraph(s) here in the practice workshop, letting us know why you chose that quote.

Not a member yet? We'd love to have you join our writing community here.