Some of you may have noticed that the esteemed Mr. Gaiman is my favorite living author. Even if he’s not everyone’s cup of tea, it’s hard not to notice him: books, graphic novels, award after award—the man is prolific and very good at what he does. So when I realized he had eight rules of writing, you better believe I beelined to read them. And guess what? They’re fantastic … with a few explanations. Read on for more. 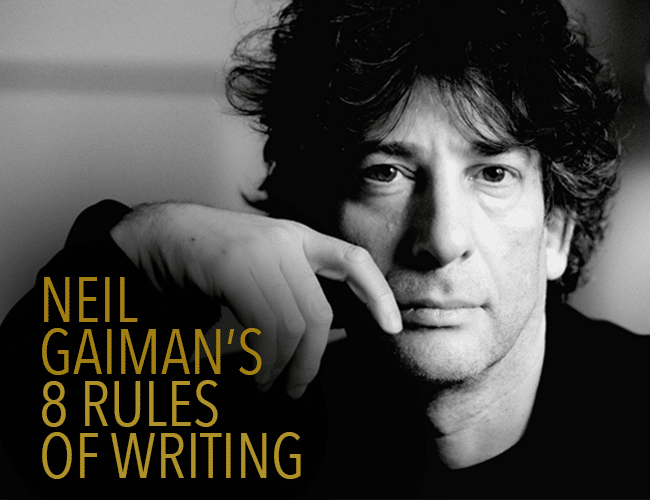 Seems like a given, doesn’t it? Well, it isn’t; many of us want to write or think about writing or plan to write, but don’t actually write.

Rule number one to be a writer is to write. Even if you feel you’re not ready.

Especially if you feel you’re not.

Put one word after another. Find the right word, put it down.

This can be challenging. Sometimes, you can’t find the right word until later. However, if we stop to try to find that right word, we often freeze.

Okay, I freeze. I sit there looking through dictionaries and wikis and thesauruses, trying to find just the right word. And when I do that, I’m not writing.

Stick with the first half of this rule. Put one word after another—and don’t stop.

(Quick tip: need to figure out that word for later? Put it in brackets, like this: “In the middle of this sentence, I could not come up with the [] word that I needed.” Then later on, you can search for the brackets [] and find it.)

Finish what you’re writing. Whatever you have to do to finish it, finish it.

I KNOW how hard this is. When it just isn’t right yet, we can go a little crazy. Hear me out: it doesn’t matter what you have to do to reach that final page.

It’s okay if you have to rip it out and fix it later. If there’s an ending, it can be fixed.

Put it aside. Read it pretending you’ve never read it before. Show it to friends whose opinion you respect and who like the kind of thing that this is.

This one’s actually a bunch of rules, but they’re important.

1. Put it aside. If you don’t put the thing down for at least two weeks, you won’t be able to read what’s actually there. Author-brain is an unfortunate malady that forces us to see what we wish was there, not what is there.

3. Show it to friends whose opinion you respect and who like the kind of thing that this is. YES! Show it to people who will understand what you’re trying to do. This may not be family; this may not be your local group of friends. This WILL be a good writing group, when you find one—folks who know what an unfinished, unpolished story looks like, and because they can see what you’re trying to do, can help you get there. (I belong to this writing group, and I love them to death for that reason.)

This is a hard one to wrap your head around, but very often, it’s true.

Your average reader can tell when something is off. They know they didn’t connect with that character, or didn’t understand that plot point, or had no idea where you were going with that tangent.

Listen to that. If your reader’s lost, then something needs elucidation—but you’re the writer, and that means you know your piece better than they do. Trust your gut when it comes to fixing the problem; just pay attention when your reader says there’s a problem to begin with.

Fix it. Remember that, sooner or later, before it ever reaches perfection, you will have to let it go and move on and start to write the next thing. Perfection is like chasing the horizon. Keep moving.

“
You’ll never write a perfect story. That’s okay. No stories are perfect. They still have the power to speak to us.
Tweet this
Tweet

Laugh at your own jokes.

If you don’t think what you’re writing is funny, why would anyone else? But it goes deeper than that: writing things that make you laugh isn’t just for your reader. It’s also for you.

If you’re able to laugh at your own jokes, then you haven’t fallen out of love with your story. Stay in love. Laugh. It’s good for the soul (and whatever you’re writing).

The main rule of writing is that if you do it with enough assurance and confidence, you’re allowed to do whatever you like. (That may be a rule for life as well as for writing. But it’s definitely true for writing.) So write your story as it needs to be written. Write it ­honestly, and tell it as best you can. I’m not sure that there are any other rules. Not ones that matter.

That’s a mouthful, isn’t it? It breaks down nicely, though:

Sometimes you have to fake that confidence, and that’s okay, too. Don’t write letting your fears drive.

2. Write it honestly and tell it as best you can.

That means the best you can at that moment in time. You owe no apologies for whatever you create. Sure, you’ll write better later; that doesn’t make what you did before embarrassing in any way. It was what you had to give at the time.

If I were so bold as to sum up Gaiman’s eight rules of writing in as many words, it would be this:

It is worth it.

Does your favorite author have “rules of writing?” Share in the comments.

Pick one of these rules. Set a timer for fifteen minutes, and write, applying that rule with all your might. When you’re done, share your practice in the comments. Don’t forget to comment on three other writers’ practice, as well!