Kill Perfectionism With This One Practice

This guest post is by Kimberly Dawn Rempel. Kimberly helps authors expand their reach and attract and impact more people with their powerful messages. For insights and direction on how to market your writing, join her Facebook group, Marketing-Savvy Authorpreneurs, or grab her free resource, 14 Ways to Leverage Your Book for More Sales NOW.

It can feel impossible to know where to start writing. 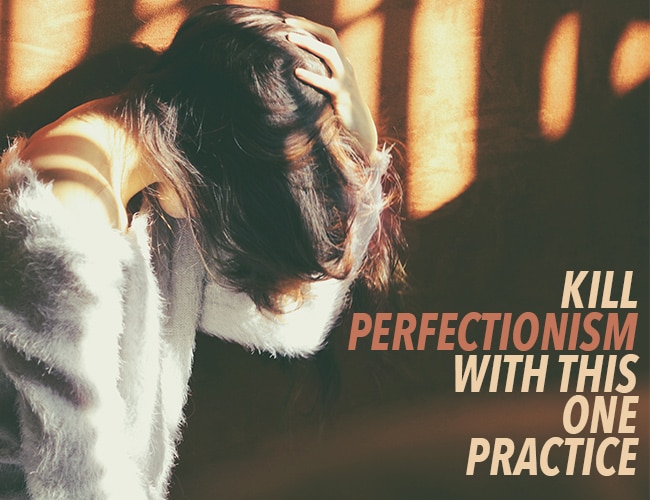 We can become paralyzed by fear, worrying our words will offend or bore readers, or worse, that we’ll never have any readers at all.

If we jump in, we might quickly find ourselves nose-deep in all the complications of story writing, tangled in plot, character development, and dialogue tags. Or a Google search might drown us in writing advice, suddenly flinging us into an identity crisis — who are we, why do we write? Are we plotters or pantsers? How can we even know the difference? *hides under desk*

This isn’t just a problem for newbies, either.

The Story of a Perfectionist Writer

Despite having been a published nonfiction writer for over a decade, when I wanted to branch into fiction writing, I had no idea where or how to start.

As a planner, it made sense to me to begin with an outline. I started there, but pretty soon I became bogged down in perfectionism, trying to think the whole story out before beginning to write it. The story screeched to a halt.

I’d heard many stories are character led, whatever that meant, so I created a character; a gruff, bristly cowboy, leaning up against a barn, with a cigarette smouldering between his thick fingers. Unfortunately for him, that was all the depth I could give him without the context of a story. Years later, when I’d think of him, he’d still be standing there, smoking that same cigarette, isolated and alone without a plot to live in. Poor guy.

My solitary efforts yielded nothing, so I read. And researched. And listened to podcasts and watched videos. (A perfectionist’s fancy way of procrastinating.) In the swirl of information, the identity crisis hit. Who was I? Why did I want to write fiction? Was the ability inborn, or could I learn it?

Pretty soon I was convinced fiction writing was too complicated for me.

The Advice That Transformed My Writing

Finally I invited my friend for coffee and to beg for advice. She's an avid fiction author who pumps out at least one book a year and has thirty titles to her credit, so I knew she’d have some excellent insight.

“How on earth am I supposed to do this??” I asked her. “How does one create a story?” I leaned in, eager for the key to my fiction-writing success.

She shrugged. “You just write it.” She said it matter-of-factly, like it was as obvious. To me, it was obviously wrong. That’s what I’d been trying to do, and it wasn’t working.

“No you don’t. I start most stories without a plan. As I write, the story comes.”

She shrugged again. “You might end up writing a whole lot of crap, but if you keep going, you find the good stuff.”

“
Want to write a story? Just write it. It won't be perfect, but give yourself permission to write crap.
Tweet this
Tweet

I didn’t buy it, but let the advice percolate. Writing was too difficult a task to risk “writing crap.” I couldn’t bring myself to do it.

Then, in the book Outlining Your Novel, K.M. Weiland proposed two words that changed my life: “What if?” I realized finding the answer would necessitate a lot of dead-end scenarios. I would have to jot down a lot of crummy ideas and terrible plots before I came up with the best one. I would have to allow those incomplete, embryonic, never-to-see-the-light-of-day ideas out onto paper.

That’s when I realized my friend’s advice was true. I would have to “just write it.”

That morning, I sat to write a fiction piece. Anything. It didn’t matter. I was just going to make it up on the spot. Even if it was crap, I decided, it would at least blunt the perfectionism that had held me back.

Inspired by a painting, I wrote one line. Then another. I kept adding one after the other without knowing anything about who was in the story or why. It was a freeing exercise to “just write.” What resulted was a mediocre story that had a reasonable plot and semi-inspiring conclusion.

3 Lessons About Perfectionism From a Writer Who “Just Wrote”

The experience taught me three things:

Perfectionism isn’t necessarily bad. In its healthy state, it can drive us to achieve goals and feel a deep sense of satisfaction as a result. In its unhealthy state, though, it can freeze us with fear or cripple us with self-criticism. That’s the version we need to break free from.

It starts with giving ourselves permission to not be perfect — to write crap.

With that permission firmly in place, it becomes this decision to conduct an experiment, the results of which do not define us or our abilities.

This one, highly effective, low-risk decision can make an effective path through perfectionism. It sure did for me.

Creativity is a cautious, tender creature. It hides from anything that might kill it — like the pressure we put on it to be something it isn’t.
However, with the decision to cast aside high-achievement and simply run an experiment, suddenly the pressure to write the next Harry Potter dissipates, and we’re free to let whatever we think of flow onto that blank page.

“It’s about getting that critic out of the way and immersing yourself in a flow of pure creativity. Do that, and you’re doing well.” Sean Platt, Write, Publish, Repeat

3. To grow in the craft of writing, one must write

Research, reading, thinking, or “letting it percolate” do not a book write. They’re necessary to the process of writing, but they are not the only elements.

Knowing and doing are two different things — it’s the difference between knowledge and experience. One can become knowledgeable about driving by reading books, interviewing the best drivers and car manufacturers, and studying related stats.

When they get in the car, though, the realities of the experience come to life. Hundreds of traffic signs, lights, pedestrians, and flashing ads all pull attention from what seemed like a simple task. Understanding is born.

Sometimes, perfectionism is just a cover for procrastination.

The Secret to Writing Success

Here it is: At some point, every single writer must finally follow these three steps: 1) Place butt on chair. 2) Place fingers on writing apparatus. 3) Write words.

Give yourself permission to do just that, and who knows what stories you'll create?

What strategies do you use to overcome perfectionism in writing? Let us know in the comments.

Take fifteen minutes to write a very short, 500-word story that you’ll make up on the spot. Before beginning, decide to allow yourself to write crap. Afterward, share your experience (not what you wrote) in the comments or tell us how you have found the advice to “just write” to be true in your own life. Remember to leave feedback and encouragement for your fellow writers, too!