Since my last post, I’ve almost finished Tomcat In Love, and it has been somewhat of an exercise in frustration. This isn’t due to the book itself; it’s more due to the fact that the narrator is one of the most profoundly annoying protagonists I’ve ever encountered in fiction. He is a narcissist with a complete lack of self-awareness (at least until the last forty pages), and an unrepentant womanizer. Early on in the novel, we’re introduced to a woman who immediately provides a voice of reason, and helps serve as a reader surrogate. Everything that Thomas believes himself to be, Donna firmly states this is not the case, and her protests to his behavior make his ridiculous narcissism stand out even more boldly. She is a perfect foil to Thomas’s insanity. 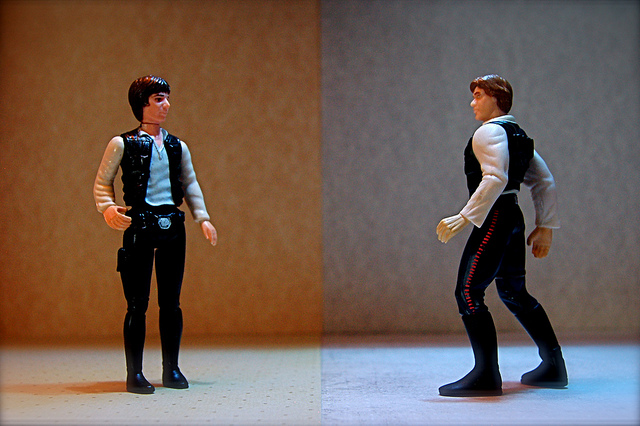 What Is a Foil?

Most of us have heard the word “foil” used in a literary context, and when used to describe a character, it means that that character serves to highlight one or more attributes of another character, often the protagonist, by providing a contrast.

In the Harry Potter series, Draco Malfoy is a foil to Harry Potter. In Daphne du Maurier’s Rebecca, Mrs. Danvers and the memory of Rebecca both serve as foils to the young wife of Maxim de Winter.  Captain Hastings in Agatha Christie’ Poirot novels serves as a foil to the Belgian detective; although they are both on the side of good, Hastings is slower to pick up on clues and dangers, which better highlights Poirot’s sharp deductive skills.

A Foil is not an Antagonist

Sometimes a foil may be confused with an antagonist, which is a character whose personality not only may differ from the hero’s, but whose goals are in direct conflict with the protagonist’s. An antagonist is often a foil, and a foil can be an antagonist, but the two are not necessarily indicative of each other.

What is your favorite protagonist relationship?

Spend fifteen minutes writing a scene between a protagonist and a foil as they try to make a mutual decision. They could be determining the best route to your story’s MacGuffin, or maybe they’re just really hungry and trying to make dinner plans. Post your practice in the comments and check out the work of your fellow writers.