The Most Important Rule for NaNoWriMo

You’ll see a lot from us in the next couple of months to help you finish your novel in thirty days.  I promise the articles and tips are gonna be good. 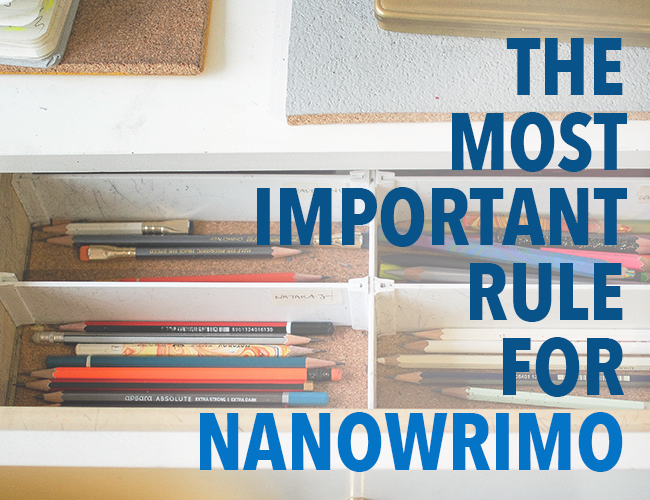 But over all the advice, over all the fun and the pressure and the late nights writing, there is one rule I want you to keep as the foundation of everything you do during the month of November: Write it anyway.

Your Inner Critic Wants to Make You Quit

I know how difficult this is. The inner critic gets vicious during NaNoWriMo, especially right around the middle of the month. That’s the point when you’ll “realize” several things:

This will be the most important time not to stop. Yes, even if you think you have writer’s block.

Your Inner Critic Is a Jerk

Your inner critic is going to stalk you especially hard next month. NaNoWriMo isn’t necessarily about producing a published book. It’s about getting your butt in the chair and writing so consistently that you learn it as a habit. That means giving yourself permission to write poorly because that’s what it takes to write better.

Your inner critic will tell you anything to stop you from getting better. It’s gonna stalk you like a tiger. I’m going to try to help you recognize the pattern of its approach.

When Your Inner Critic Stalks You

Does this pattern sound familiar?

Up to this point, the inner critic has been stalking you steadily. There’s been a rustle in the grass, an occasional deep-chested growl that scares you, but it hasn’t come into view yet. You might even be telling yourself you’re safe. That it won’t strike this time. That you’ll make it through.

Your inner critic will wait until your back is turned to pull the sled up the hill before pouncing.

Writer’s block is a real thing in the sense that it will trip you and stub your toe real good.

Writer’s block is not a real thing in the sense that it’s a metaphysical chain that keeps you from going forward no matter what you do.

Yes, what you write will probably be lousy. That’s okay. Write it anyway.

Yes, you may lose the thread of where you’re going and why. That’s okay. Write your characters washing their clothes until they tell you where they’re going next. Write them going to the bank or brushing their teeth. Write the weird neighbor across the street staring at them through the window like a creep. It doesn’t have to be good. Write it anyway.

Yes, you will probably not end up keeping the stuff you write when powering through writer’s block. It doesn’t matter. Write it anyway.

When you write it anyway, you’re strengthening your muscles, training your brain, and teaching your soul that no matter what your inner critic claims, you will not be stopped. Write it anyway.

You Will Beat Your Inner Critic

Your inner critic stalks you like a tiger, but you know what? It doesn’t actually have any teeth. It can’t make you bleed. It can’t actually stop you. It can only convince you to stop yourself.

Your inner critic won’t stop you.

Hang those three words on your wall: Write it anyway.

Now go forth and prepare to conquer NaNoWriMo. Make November your own.

Have you gotten tripped by the inner critic’s lies before? Let me know in the comments.

Today, I want you to practice fighting off that inner critic. I’ve got a challenge for you today. Are you ready? Of course you are.

Find an old piece of writing that got you stuck. Maybe it’s a practice from another article, or maybe it’s a work in progress you started and then put down.

Now, take fifteen minutes to continue working on it. What you write doesn’t have to be good. You don’t have to keep it. It doesn’t even have to make sense. Write it anyway.

You can beat that inner critic. I promise.

When you’re done, post your practice in the comments, and be sure to respond to your fellow writers and encourage them to stamp on their foreheads those three words: write it anyway.