Parentheses: How to Use ( ) Correctly

People ask me all the time (and by all the time, I mean never), “Liz, what is your favorite grammatical/punctuational structure?” It’s hard to narrow it down to just one (although you’re probably already aware of my love for the Oxford comma), but if I happened to be in a life-or-death of language situation, it would probably be parentheses, or to be more specific, the parenthetical statement. 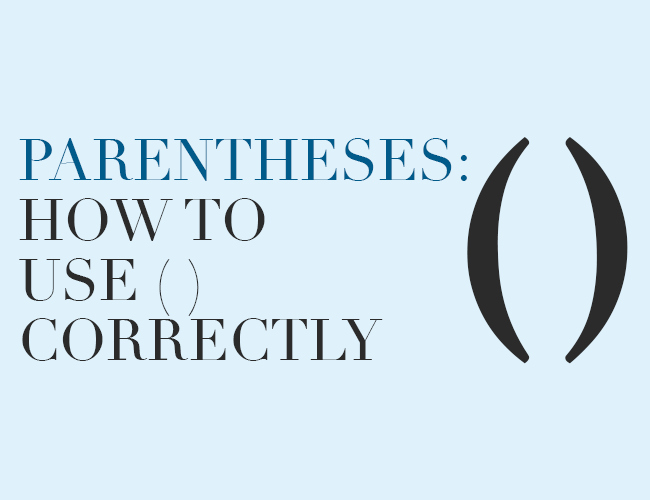 I bet you already figured that out.

What Are Parenthetical Statements?

“
An em dash indicates an abrupt change in thought or action, while a parenthetical statement is a mild digression.
Tweet this
Tweet

A parenthesis is like a close friend quietly whispering in your ear, but an em dash is more like your high school graduating class arriving drunk on your doorstep and announcing that you are hosting this year’s reunion, and it’s happening right now. Notice the difference:

Angela exhaled quietly (she didn’t want Frank to hear anything) and felt her way along the wall to the door.

Angela exhaled quietly—she didn’t want Frank to hear anything—and felt her way along the wall to the door.

In the second sentence, the fact that Angela doesn’t want Frank to hear anything has the same importance as her movement towards the door. If that’s your goal, then em dashes are what you’re looking for.

If you’re primarily focused on Angela’s progression towards the door, then use parentheses.

You can also use a parenthetical statement to give your reader information without adding emphasis to the aside:

Kevin yawned (he’d only had four hours of sleep) and stretched out on the floor at his sister’s feet.

The parentheses allow your audience to continue reading through the paragraph without stopping and acknowledging that, oh, Kevin’s lack of sleep is something that I need to pay attention to. Instead, they know that the action isn’t leaving them behind.

The Perils of Punctuating Parentheticals

This is all well and good, but let’s talk about the things that really trip people up: using parentheses and other punctuation. Does the period go inside or outside the parentheses? How about the comma? Let’s clear up this confusion once and for all.

If the part in parenthesis is inside a sentence, the punctuation goes outside the parentheses:

If the part in parentheses is not within another sentence, the punctuation goes inside the parentheses:

Henry tracked mud across the floor as he came in from the rain. (Sorry, Mom.)

If the part in parentheses is several sentences long, or if it uses special punctuation, like a question mark or exclamation point, the punctuation goes inside the parentheses:

Mark doubted it would rain today (but for the garden’s sake, he hoped it would!).

Emily looked forward to coloring at her grandmother’s house this afternoon (although she didn’t want to use crayons. Did her grandmother have markers? She wasn’t sure).

Although it’s possible to cram whole paragraphs into parentheses, it’s generally a bad idea. For best effect, use parenthetical statements sparingly, for small asides. Don’t overwhelm your readers with them!

Go Use Parentheticals (You Can Do It!)

Do you feel prepared to use parenthetical statements? (It’s okay if you don’t; it just takes practice.) Try using them in your writing, and keep an eye out for the ways other writers have used them.

Who knows? Maybe you’ll find you love them as much as I do (and that’s a lot of love!).

Are parentheticals important in your writing? Let us know in the comments.

Prompt: Victor leaned forward in his chair and looked at Kayla, who was tracing the rim of her mug with her fingers.

Share your writing in the comments, and be sure to leave feedback for your fellow writers!