How Relatable Character Relationships Will Make or Break Your Story

I want you to think back to your favorite book or television show. There may be many things that stood out to you about that story—the plot, the scenery, the outfits, the scope, or something else.

There's one aspect, however, that underpins all those things. One detail which, if missing, leaves your readers unable to really invest themselves in your story: relationships between characters. 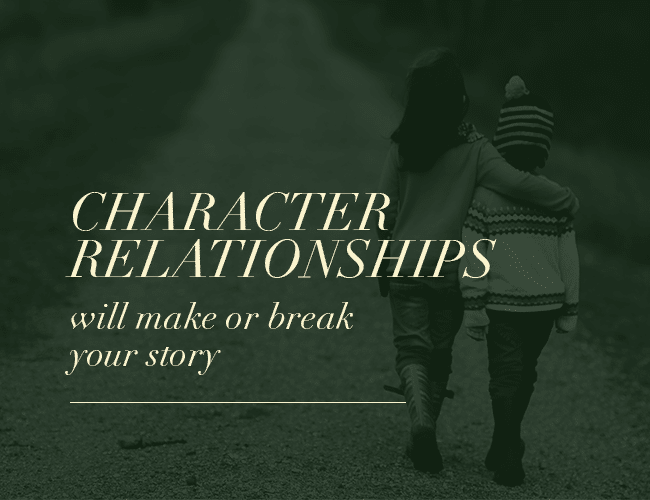 The Importance of Character Relationships

Of course, you know character development is essential in writing. You also know you need to have a tight plot with holes filled in and both conflict and resolution. But no matter how great your plot is, no matter how much world building you do, in order for your readers to really invest, they need more. Specifically, they need relatable relationships between characters.

The Character Relationships We Love

Lord of the Rings was fascinating, but what made it matter so much? The friendship between Sam and Frodo (and, in the movies, Legolas and Gimli), the broken friendship between Saruman and Gandalf, the burgeoning romance between Aragorn and Arwen, the mess with Gollum, and more.

The West Wing? Sam Seaborn and Leo McGarry, Josh Lyman and Toby Ziegler, CJ Cregg and Danny Concannon, among others.

There are those who even go so far as to say that the Marvel Cinematic Universe is more powerful because they've focused more on the characters' relationships (e.g. Civil War) than the DC Cinematic Universe has. (Shots fired, I know, but I mean no offense to DC fans!)

How to Write Great Relationships

This is both simple and hard. The simple part is this: develop your individual characters well. Know who they are; know what they want, what they hate, and how they're likely to respond to various circumstances. Then just lock those well-developed characters together in a room and let them interact.

The hard part is all of the above.

You can do this because you've been doing it in real life for years. Why do you dislike some people? Why do you trust others? Whom would you trust with your life, and why? Whom would you never wish to be alone with, and why? (Please don't tell us their names.) Your characters will get along sometimes and not others. They'll harbor both grudges and love from afar. In other words, they're people.

Apply “being people” to your characters. Those relationships will give your fictional war meaning. It will make deaths, victories, and defeats mean so much more because they affect more than one person. Just like real life.

Do you have favorite character relationships in your stories? Tell us about them in the comments.

Take two characters with a tense relationship, lock them in a room, and write about it for fifteen minutes. (We'll assume they will not engage in physical altercation). This time in that room is their only chance to talk, and they know it; let them play it out, then share what you've written in the comments. Don't forget to comment on other people's practice!