You Have Permission to Suck

It’s NaNoWriMo, and around here, that’s also known as “your inner critic just drank a Red Bull and came after you with claws” month. 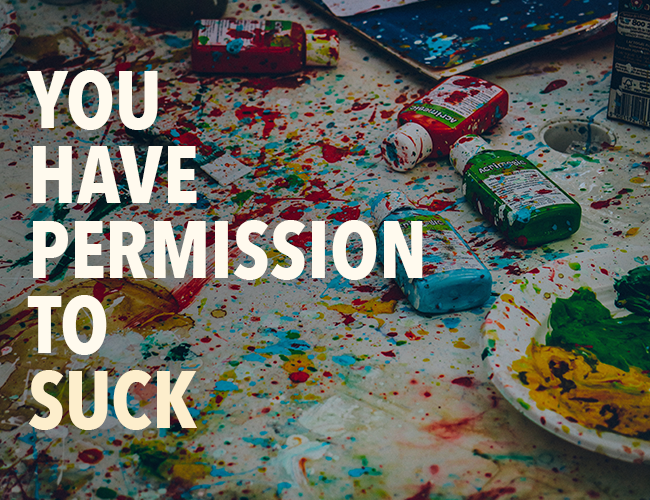 The goal of this post is to help you shut him up.

Yes, You Do Have Permission to Suck

We all feel like we should be writing well right off the bat. That what we create should be ready now, tomorrow, or maybe even yesterday. And when it isn’t, we beat ourselves up.

Here’s the thing: sucking as a writer is the only way to learn to write well.

You read that sentence, and you’re already making excuses, aren’t you?

You have permission to suck. (“No,  I don’t. If I suck, then I have no business being a writer.”)

It’s about time you asked that. Here’s my answer: every writer who’s ever made their mark.

Permission From the Greats… to Suck

We all know what it’s like to write things that suck. I do it. You do it. Anyone who’s ever tried to transfer their imagination and dreams and wisdom to paper has experienced mighty suckage.

In order to capture the stuff of your imagination on paper the way you want it to appear, you have to learn to write. And in fact, a large part of learning to write is sucking for the first enormous portion of it. But don’t take my word for it.

That’s not a million excellent words. They’re words not worth keeping. And that’s a lot of suck.

If it were good the first time, it wouldn’t need to be rewritten. It’s almost like Michener, an award-winning author of more than 40 books, has a pretty good idea of what it means to give himself permission to suck.

In fact, C. J. Cherryh, author of more than sixty books, says much the same thing:

“
It is perfectly okay to write garbage—as long as you edit brilliantly. —C. J. Cherryh
Tweet this
Tweet

She says that because she—like the rest of us—has a lot of experience writing garbage.

I know how hard it is to write garbage, especially when you want so much more for the story in your head. You know what you want your writing to be; you know how good books and stories move you. When what comes out of you isn’t as good as you want, it’s very, very easy to grow discouraged.

There are times, in fact, when what you write just . . . isn’t even salvageable. News flash: that is also normal.

If you are willing to do something that might not work, you’re closer to being an artist.
—Seth Godin

In other words, in order to learn to write, you have to be willing to write stuff that won’t work. Why? Well, Vonnegut actually answers that:

“
To practice any art, no matter how well or badly, is a way to make your soul grow. So do it. —Kurt Vonnegut
Tweet this
Tweet

If you give up writing because what you wrote sucks, then you’re just abandoning the path every writer before you has already taken.

In other words, here is your new mantra: My writing sucks? Good! I’m on the right path.

Yes, This Means You

Kind of like becoming a musician. Have you played an instrument, or do you know anyone who has? When they started, they sucked, didn’t they? (It’s okay; you can admit it. I won’t tell.)

Learning any art takes time. And if you hold yourself to high standards from moment one, you are likely to give up.

But if you give yourself permission to suck, then when you do suck, instead of being thrown, you’ll go, “Oh, there it is. Well, I knew suckage was coming,” and you’ll be able to keep going.

NaNoWriMo is a really special time for combating that inner critic (who is, as I’ve often said, a jerk). Your inner critic’s goal is to keep you from writing no matter what. That means your own goal must be to keep writing—no matter what.

You can do this, fellow writer. Don’t give up. Write.

Have you been tripped up by your inner critic lately? Let us know in the comments!

Take fifteen minutes and write. Just write. Don’t worry if it sucks. Give yourself permission to suck, and in the process, knock your inner critic on the head. Don’t forget to respond to other writers in the comments and give them a hand beating up that inner critic!