3 Whimsical Reasons to Daydream Your Story

Daydreaming is one of your greatest writing tools. Mind you, some people call it visualization. Others call it imagination. I call it story-prep, and here and now, I am officially giving you permission to daydream. 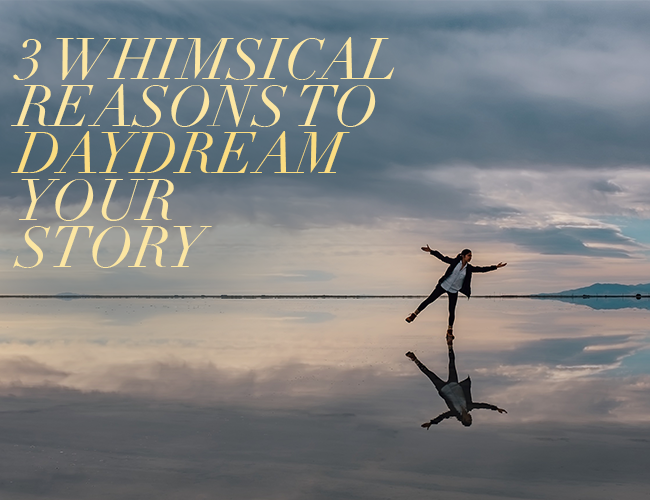 3 Whimsical Reasons to Daydream Your Story

Not convinced yet? Here are three reasons why daydreaming might just be one of the best things you do for your writing today.

You already know you should be reading in order to write well. (You wouldn't trust a “gourmet” chef who never ate the kind of food he cooked, after all.) Daydreaming is another super-helpful key to good writing, and here's why: the key to show-vs-tell is calling on all the senses, and daydreaming allows you to do that.

Do you remember the smell of freshly fallen snow? What about the smell of a fire, possibly with marshmallows? Or how about the scent of hay in a barn, or horses? Or a field spread with manure, or a dank, urine-stained alleyway in a city?

How about sounds? Do you remember loud traffic at night with distant sirens? How about wind in trees, branches too high to reach? Have you ever been in a nice, quiet restaurant, and heard soft laughter and conversation paired with the gentle clink of flatware on plates?

How about the sound of a subway station at night, tense with your echoed steps and distant trains? Do you recall a loved one's sleeping breaths? A cat's purr? A dog's bark? A dog's smell? The way mud looks clumped on a dog's fur?

Dried blood on your skin. Goosebumps. Your body's reaction to a sudden and frightening noise (heart pounding, widened eyes, maybe shaking, maybe stomach churning, quickened breath). The spurting taste of fresh strawberries. The shock of hot coffee on a cold day, or cold iced tea on a hot day. The sour-sweet tang of lemonade. The bitterness and slime of vegetables cooked way too long. The silkiness of melting chocolate.

Instead of saying, “It was hot, and I sweated,” say, “Sweat stung my lips, and I couldn't stand my own smell, but sure as hell, that lemonade was the best that ever happened to me.”

“
Daydreaming helps you show because it gives you all five senses to play with in your scene.
Tweet this
Tweet

We live in a deeply visual era. This is both good and bad, but one of the benefits is that we've all seen a good movie, television show, or play. That means that we've experienced someone's successful plot communicated in a very limited format.

Writing is less limited. We have no special effects budget, no casting problems, no broken props. When you visualize your story, it usually moves quickly. When you're deep in daydreams, you see exactly how this tale has to play out. Chances are when you're in that zone, you react to your story the way you want readers to react later.

Yes, what you imagine may seem ridiculous. A hardboiled cop drama might just daydream its way into Superman showing up to save the day, and you can't write that—but what it really tells you is your characters need outside intervention to overcome the conflict-point you've been having trouble fixing.

Maybe you daydream your eighty-three-year-old protagonist flipping out, locking her fellow quilters in the closet, and driving away at top speed while singing “Single Ladies.” You probably can't fit that in your cozy Southern mystery, but what it does tell you is your character needs a break and some time to herself before the question of “who killed Judge Brown” can be solved.

“
Daydreaming gives you clues you need to fill in the holes that keep your plot from completion.
Tweet this
Tweet

One of the wildest things that I've ever realized about writing is how much daydreaming builds my characters.

Here's the kicker: half the time, those characters aren't doing current-book things in my daydreams. They've jumped into someone else's story (Harry Potter is a favorite of mine), or they're on the wrong planet, or they're suddenly in a prequel, or they're giving me a glimpse of who they are twenty years after the current book ends.

I've learned to let them play.

Daydreamed characters step out of the constraints of your story, and that's good. That means you can see who they really are.

How do your characters respond to different situations? Different problems? How much of their personality is nature vs. nurture? Does their humor stay the same? Do they maintain their philosophies of life, worth, and identity?

Those responses do more to tell you who they are than most of the “character chart” exercises out there.

Just remember to let your characters play in your daydreams. If they want to go off and do something outside your book, let them. They're trying to tell you something about themselves, and I promise it won't make your book any less vibrant.

“
Daydreaming gives you the freedom to play with characters and learn more clearly who they are.
Tweet this
Tweet

Go Forth and Daydream!

So wherever you are in the writing process, go for it. No, it isn't childish. It's powerful, and it can even help you fall in love with your story all over again.

Consider this your official permission. Go forth and daydream today!

Have you found daydreaming helps your writing? Let us know in the comments!

This is the fun part! I'd like you to take some time and visualize your next scene. Daydream; play it out, letting the characters do what they want.

When you're through, take fifteen minutes to write down what you saw, paying special attention to the “showing” aspect of the story. Try to call on different senses. Have fun with it!

Then post your practice in the comments and don't forget to comment on others' stories as well. 🙂